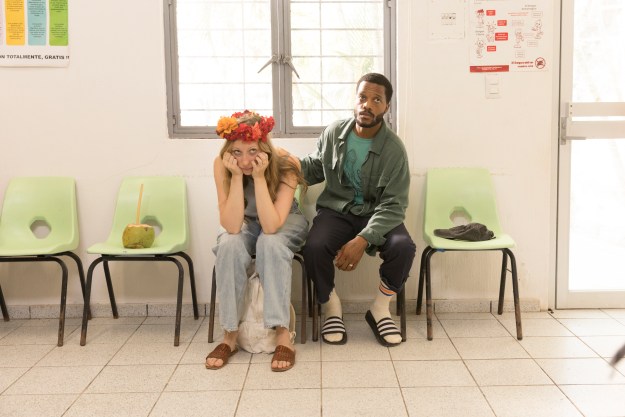 “The Drop wants to be more funny and insightful than it is, and it ultimately delivers a disappointing satire on love and relationships.”

Sometimes you can bring together a group of very funny people and still have a tough time getting a laugh.

That’s the lesson that bubbles to the surface in The Drop, director Sarah Adina Smith’s awkward comedy about a couple whose plans for a romantic, tropical getaway take a turn when one of them accidentally drops a friend’s baby and sets a series of unfortunate events in motion. It’s a unique, attention-grabbing premise for a film, and with a cast filled with talented comedic actors, it has plenty of potential. Unfortunately, the laughs are few and far between in The Drop, which never quite settles on the sort of film it wants to be and quickly loses momentum after its early, baby-dropping hook.

The film’s ensemble cast is led by Anna Konkle (Pen15) and Jermaine Fowler (Coming 2 America), who portray couple Lex and Mani, respectively, as they attempt to turn a friend’s tropical, destination wedding into a romantic opportunity to become parents themselves. They’re joined on the trip by a group of narcissistic, obnoxious friends played by Utkarsh Ambudkar (Ghosts), Jillian Bell (22 Jump Street), Aparna Nancherla (Space Force), Joshua Leonard (Humpday), Jennifer Lafleur (Lamb), and Robin Thede (A Black Lady Sketch Show). After Lex accidentally drops the engaged couple’s infant daughter, the trip quickly spirals into a relationship-challenging ordeal as the pair begin to question their future together while contending with their friends’ self-obsessed quirks.

Scattered within the film’s twisted satire of love and intimacy are a few funny moments, too, peppered amid jokes that don’t quite land.

Tonally, The Drop pivots between raunchy romantic comedy and surreal satire, with scenes of waves crashing onto a beach and other imagery dividing the narrative into chapters.

There’s an overwhelming sense that the Drop has big, important things it wants to say about our understanding of romance and commitment, and the collaboration and compromises it takes to maintain a loving relationship between partners and friends in today’s society. When it comes to getting the point across, however, the film regularly falls back on dick jokes and a mix of either strangely absurd or far-too-easy humor to distract from how little it actually says about any of these topics.

This awkward uncertainty in the sort of film it’s trying to be runs through the rest of The Drop, too.

While the cast of The Drop is impressive, the actors — who are all funny individually — never quite gel, either as fictional couples or friends.

It often feels like each of the actors is doing their own, individual bits, and although some of the individual characters are very funny — Ambudkar’s name-dropping, microdosing influencer. and Nancherla’s rightward-drifting, gun-toting lesbian are standouts — bringing them together ends up making scenes less funny instead of more so. No matter how much you want to see them play off each other in hilarious ways, The Drop keeps the interaction between all these colorfully caricatured characters disappointingly predictable and tame far too often.

It’s unfortunate, because Smith and Leonard, who co-wrote the film, have created some truly ridiculous characters that can be slammed together in some wild, entertaining ways, but instead, they just casually wander through the film, merely glancing off each other.

That lack of chemistry extends to Konkle and Fowler, who both seem like they’ve lost interest in the film by the end of the first act.

The pair have a tenuous connection in the lead-up to the titular, baby-dropping incident, but lose track of it entirely after that point. The growing disconnect between them as a result of that event is intentional to a certain degree, and part of their characters’ story arcs, but the lack of any well-established love between them to begin with makes it hard to care much about the divide that forms later on. Their relationship — much like their characters — never feels fully formed, so it’s hard to feel bad for them when everything begins to fall apart around them.

Halfway through the film, it feels like both actors just want to get to the end of this story, and that might be the easiest sentiment to sympathize with in their performances.