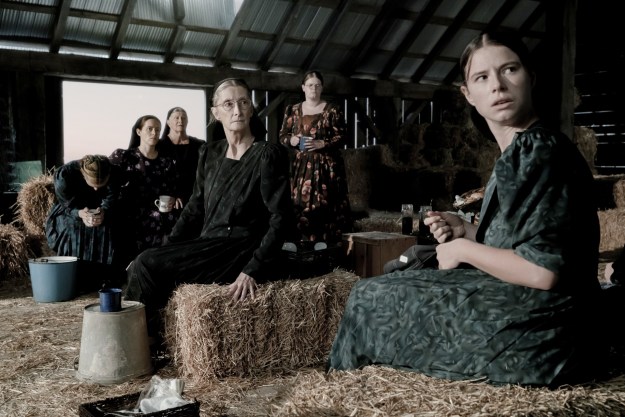 “While Sarah Polley's Women Talking has its flaws, its terrific acting and resonant script make it the first must-see movie of 2023.”

Women Talking has to have one of the most honest titles in motion picture industry. There are women talking to, for, and about one another — often friendly, but sometimes not — and what they talk about for 104 minutes is nothing short of enthralling.

Yet the movie, written and directed by Sarah Polley (Away From Her), is more than just a solemn chamber piece; it’s also surprisingly funny in parts, uplifting without being schmaltzy, deeply moving, and also maddening in all the ways it just slightly misses the mark.  It’s a prime example of how a flawed movie can be more powerful than a perfect one, and maybe that’s the point of the whole picture.

Violence in the heartland

Women Talking begins in the aftermath of a series of violent sexual attacks that have occurred against the women of an isolated Mennonite community somewhere in the heartland. These assaults have taken place over a period of several years by the fathers, husbands, and sons of the colony, and one of them has been attacked by one of the victims.

With the assailant imprisoned for his crime in a distant secular jail, the Mennonite men leave the community to bail him out, giving the women a rare opportunity to assemble and weigh their options: do nothing and turn a blind eye to the abuse, stay and fight for the land and family they have cultivated over the years, or leave to find a new home.

In just the opening five minutes, a generation of trauma is conveyed and the movie’s central dilemma is introduced. The next 100 minutes focuses on a group of 10 women — some of them mothers and grandmothers, some just children, all of them affected in some way by the sexual violence in their community — as they sit down in a barn to discuss the future of themselves, their families, their community, and their faith.

The movie’s chief strength is getting to know each of these women (and one man who is sympathetic to their plight). There’s Ona (Rooney Mara), who is unmarried and pregnant by one of her attackers; Salome (The Crown‘s Claire Foy), who fought back from her attempted assault in the opening and is itching to fight some more; Mariche (Jessie Buckley), who is stuck in a violent marriage and takes her anger out on others; Agata (Judith Ivey) and Greta (Shelia McCarthy), the two elder stateswomen of the community who weigh the logistical, personal, and spiritual complications with whatever decision they make; Nettie (August Winter), the victim of an attack that has rendered them mute and distrustful of adults; and Scarface Janz (Frances McDormand), who lurks on the sidelines as the chief representative of the “do nothing” faction.

There’s also August (Ben Whishaw), the lone male of the group, who is there to take the minutes of the meeting and serves as a potential love interest for Ona. Some of these characters are related to each other. while some loathe one another. All are united, though, by a common desire to talk through their current situation and weigh the pros and cons of each choice.

Like the great 1957 classic 12 Angry Men, there’s more than enough interest and drama in watching these characters question one another and themselves. Is it wrong to leave in the eyes of God? Is it right to stay even under a constant threat of physical and mental violence? If they do leave, do they abandon their male children? And where will they go to once they leave the community they’ve always been a part of? It’s a testament to how good Women Talking is that these topics are debated in a way that never feels stagey or stagnant, even though most of the movie takes place in a barn.

The stellar acting ensemble gives proper weight to the movie’s central arguments. Mara gives Ona a serenity and inner calmness that contrasts with the often heated scenario she’s placed in. Foy’s Salome is all fire and anger, ready to stay and fight anyone who dares cross her path. Both Ivey and McCarthy bring a subtle steadiness and wisdom to their understated performances that acts as the group’s center of gravity.

As Mariche, Buckley is simply outstanding, using her character’s sarcasm to mask deep wounds that are reluctantly revealed toward the end of the movie. And Whishaw turns in a heartbreaking performance as August, whose love for Ona is exceeded only by an internal sadness that pops up in the climax. All of these actors work in beautiful harmony with one another, creating a sense of authentic community that helps sell the high stakes at hand.

If the acting ensemble is pitch perfect, the rest of the movie is less so. Polley deviates too much from the central conflict in the barn in the first hour, thereby weakening what should be a powerful setup. Perhaps leery of appearing too stagey, Polley instead frequently cuts to random bits of action, from girls walking in sun-dappled fields to showing the aftermath of each of the women’s assault. The result is both frustrating and confusing, as it is sometimes more complicated than necessary to follow the progress of the debate.

At one point, a character asks to vote again on whether to stay or leave, to which another one responds, “Didn’t we just do that?” A sense of repetitiveness creeps in, as the central question is asked and answered repeatedly. Less time is devoted to really exploring some of the issues the movie raises, like how the women’s faith clashes with the violence they’ve endured . Not one person is angry at their God for allowing this to happen, which clashes with the newfound spirit of rebellion that each woman, in their own way, displays.

In addition, there’s no real suspense as to what the women will decide to do. The “do nothing” faction isn’t given a voice; after the beginning, they are quickly discarded, with only McDormand’s Scarface Janz appearing sporadically with her silent scowl. Why would these women stay? What’s their argument? In contrast, the “leave” faction is given too much weight for any real suspense to be generated as to what the outcome of the debate will be. While it’s the obvious right answer from a modern audience standpoint, it shouldn’t be so apparent within the movie itself.

These flaws, strangely, make the movie even more resonant and powerful. Women Talking could’ve easily been too stagey or didactic, focusing more on outlining each detail of the Mennonite community, or employing cheap theatrics to goose up the drama. Polley does neither; instead, she shows an empathy and compassion for these women who are faced with an impossible choice.

These characters come alive to us through the power of Polley’s words and the excellent acting from the cast. “Speaking truth to power” is a phrase that’s a bit well-worn and overused at the moment, but in Women Talking, when these women speak the truth of their situation, they gain the power to assemble, to debate, and most radically, to choose. It’s a powerful movie to watch, and one that is all the more resonant and necessary in a post-Roe 2023.