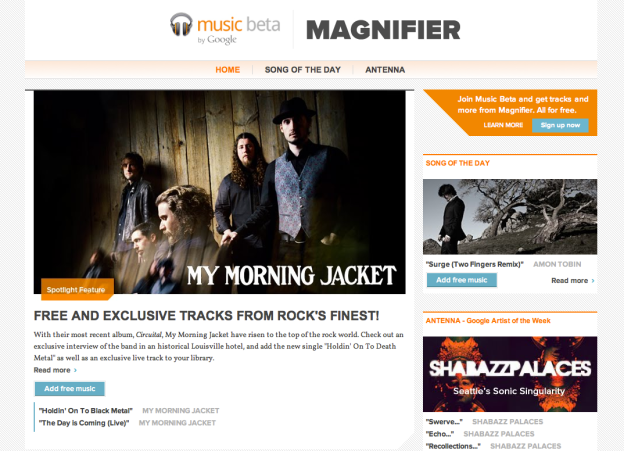 Remember the buzz leading up to the launch of Google Music? Yeah, we do too. Since then, the infatuation and excitement surrounding a Google cloud-based music streaming solution has been reduced to mere smolders. But it’s been three months since Music Beta was introduced and the site’s become stagnant.

To spur a little interest, Google has launched its new music blog, Magnifier. Magnifier is part music discovery, part music education, and part Google Music marketing. But the most important part of Magnifier is that the music it introduces can be added to Music Beta instantly and for free – something its somewhat-lacking library could benefit from. The site will feature promo tracks from artists it’s featuring as well as a song of the day that can be added to your Music Beta collection at no cost. This, obviously, means you have to create a Music Beta account – a smart move to drive new users to a site that needs to reignite user interest.

Luckily Magnifier doesn’t seem to be some throw-away effort to pump some life into Music Beta. It’s being headed by former Rhapsody VP and Android exec Tim Quirk and has a few features to keep visitors busy. There’s the general posts, as well as the Song of the Day section and something called Antenna, which appears to be a sort of collection of artists-to-keep-your-eye on. There’s also a “Tips + Tricks” section for using Music Beta.

And it’s got Google+ written all over it. There aren’t options to share via any other social networking sites – G+ only. We can only hope this means Google+ and Music Beta will eventually be linked in some manner.