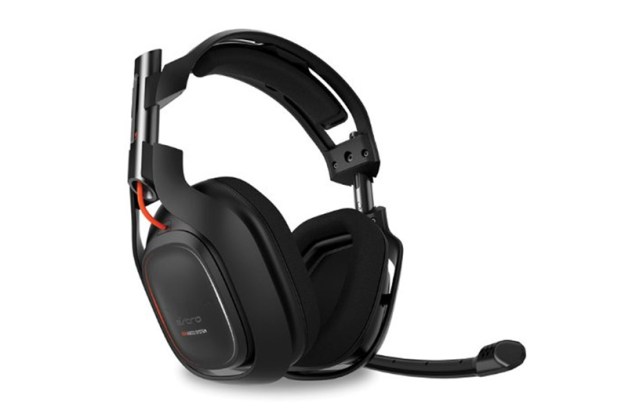 “The Astro A50 made every game title we played more engrossing and entertaining with terrific virtual surround and extremely visceral, powerful sound.”

Despite the low-key name, Astro Gaming has quietly become a gold standard in the gaming community for its virtual surround sound products. The Astro A40 headset helped set the bar for 7.1-channel replication, and it continues to be one of the most highly recommended gaming headsets available. With such a high pedigree, we were very intrigued to try out Astro’s latest release, the A50 headset.

A wireless upgrade from the A40, the A50 promises “audiophile-grade sound” along with the convenience of 5.8GHz wireless connectivity. At $300, the A50 costs $50 more than its predecessor, and at these prices, we were expecting some seriously premium audio. To find out just how good they sound, we knew we would have to log a ton of hours of hard videogame time to give the A50’s a thorough test – but such is life. With our soda and snacks in hand, we sat down for some long gaming sessions to see what the A50’s could do. It’s a tough job, but…well, you know.

The A50s come in a large two-piece box with a resigned black cardboard outer shell. Pulling it away reveals the box, covered in colorful game inspired graffiti to get you ready for the action. Inside, the A50s are nestled in a two-piece, hard-shell plastic inset, with a succinct tutorial for setup beneath. A comprehensive assortment of accessories accompany the headset, including a small “mixamp” (which processes effects and drives the headphones), a plastic stand, an optical cable for connection to the console, a 2.5 mm cable for Xbox voice chat, and two mini-USB to USB cables (one to power the mixamp from the console, and the other to charge the headphones from the mixamp). The headphones gave a whiff of familiar “new car smell,” immediately imparting a sense of quality.

Cloaked almost entirely in matte black, the A50s look like they could have been a prop in Terminator 2. A hard-plastic exoskeleton headband and earpiece connections give the headset a distinctly futuristic look. The two adjustable metal arms that connect the earpieces are shaped like smokestacks from a semi, and they surround bright red coiled cables that ascend from the ear cups, lending a little color to offset the black.

The ear pads are made of soft, furry black foam that feels like what you’d find on a pair of cans from the 70s, giving a retro dichotomy to the overall design. The headband sports a hefty swath of the same padding.The earpieces rotate out, allowing you to wear the A50’s around the neck in the gamer style for extremely long sessions. The left earpiece has a swing-down microphone, along with a ⅛-inch input for the Xbox chat cable, and the mini-USB input for charging. You can’t remove the mic, but swinging it up automatically mutes it.

The right earpiece plays home to a power button, digital volume dial, and three-way switch that Astro claims lets you choose between EQ settings for movies, hardcore gaming, and media. However, we found it mostly just seemed to dial back volume and detail as we switched settings. (Astro says it will be releasing software to allow you to program your own EQ with the mixamp in the future, which could be very cool.) We left the switch in the position it came in for our testing, which was position number three. The outside cover of the right earpiece is actually a button marked with red and white, which allows you to individually toggle volume for voice chat or game audio while playing online. The button also works as a secondary volume control during offline play.

The soft padding on the ear pads and headband makes the A50 pretty comfortable, though they’re a bit heavy. They agitated the top of our head after a few hours, but it wasn’t bad, and it seemed to coincide with our ear fatigue, signaling it was time to take a break anyway. The ability to turn the earpieces out and wear the set off of the ear should be a welcome addition to those who plan all day gaming sessions.

We’ll cut to the chase: Astro’s A50 delivers brilliant sound and a very realistic 7.1 surround replication, creating a phenomenal sonic gaming experience in a wireless package. If you’d like to know how we came to this conclusion, read on; but be warned: we’re going to get a little gushy because we’ve become big fans of this headset.

We began our testing of the A50 with the ridiculously popular first-person shooter, Call of Duty: Black Ops. We powered up the A50, put them on, and were immediately submerged in the virtual aural landscape that is the A50 7.1 surround sound environment.

Yes, there are only two sides delivering the sound, but the immersive effect the headphones created, coupled with the impeccable sound design of the high-budget shooter, gives an impression of real sonic space. Slowly we became accustomed to the effect, and began to move through the virtual arena. As we engaged with the enemy, we were soon entranced by powerful explosions bellowing thunderously, and strafing bullets that seemed to cut through the air from back left to front right. Helicopters moved continuously overhead, their whopping blades striking the air with smooth, thick clips. High, piercing machine gun fire in dozens of different tones and iterations echoed roundly off the walls of stone hallways.

There were some tiny “seams” as the drivers tried to connect the sounds when we spun around in the game, but not many. For the most part, we seemed to be placed in a totally spherical universe, with even high and low dimensions replicated well. The virtual “sub” gave a potent subtext to the battlefield through its constant rumbling, though we wished it was just slightly deeper. The deluge of powerful war sounds was engaging, but we were also struck by the A50’s pleasantly articulate handling of the small details, like boots cutting through graveled sand, or bullet shells cascading down from the sides of a rifle and ringing brightly on the concrete below. Dialog reproduction was warm, clean, and forward in the mix, with every detail accentuated.

Though the overall sound characteristic of the A50 was a little bright (a little too much emphasis on treble) for our taste, we couldn’t really complain much because it was also supremely clear and crisp. As we tested other games such as NBA 2K13, and Red Dead Redemption we continued to enjoy the remarkably immersive experience. In the old west of Red Dead, crickets chirped softly in the woods to our right, and birds sang behind us as our horses hooves thumped against the ground. Jay-Z’s soundtrack in 2K13 enabled us to hear the A50 tackle hip-hop with style, as the arena’s “virtual sound system” pumped music over the cheering crowd with palpable force. Many other brilliant musical moments cropped up throughout our testing as well, with low stinging brass, softly bowed strings, and thick drums thumping to an accelerating pace.

Under every testing scenario, the A50 continuously impressed. This headset nails all the feature points you’d expect from high-quality gear such as auto shutoff, hassle-free wireless connection, and long battery life. But more importantly, the A50 made every game title we played more engrossing and entertaining with their extremely visceral and powerful sound. We had a blast testing the Astro A50, and we feel that, for the serious gamer, the audiophile, or those who just love great sound, they’re a must-try.

Topics
Google Assistant and YouTube Music coming to Galaxy Watch 4
Turns out Microsoft’s HoloLens 3 might not be dead after all
Wi-Fi 6 will soon go mainstream and usher in the metaverse
Upcoming Sonos headphones may well include Wi-Fi
Boston Dynamics’ festive robot video has a surprise ending
Overclockers surpassed the elusive 9GHz clock speed. Here’s how they did it
Amazon starts drone delivery trials in California and Texas
What to expect at CES 2023, from mondo TVs to EVs
12 high-profile tech opportunities for those job hunting
Make tech work for you: 10 side gigs to make extra money for the new year
CES 2023: Intel’s new 13th-gen CPUs are faster, cheaper, and more efficient
GeForce Now upgrades to RTX 4080 for 4K 240Hz cloud gaming
Nvidia brings the mighty RTX 4090 to laptops at CES 2023