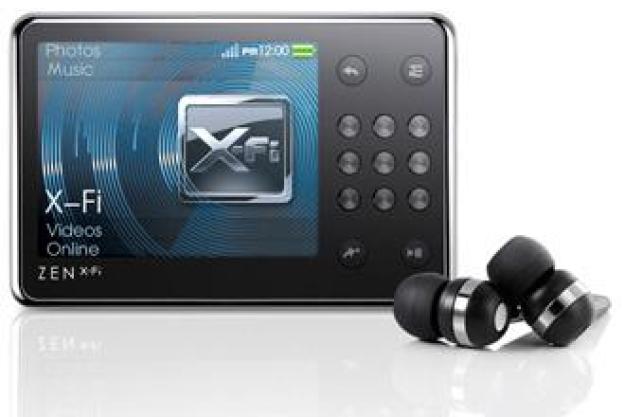 “If maximum flash storage for the dollar is what you're after, this is a good choice...”

Creative has been hawking its X-Fi sound enhancement technology hard in the last couple of years, putting it in everything from sound cards to headphones — and now in a portable AV player. Aside from the usual voice recorder, FM radio, expandable storage, and audio/video playback, the Zen X-Fi is the first player from Creative to offer built-in WiFi. Like Microsoft’s Zune, the X-Fi lacks a Web browser, which is a major stumbling block for a WiFi device, but it also lacks the Zune’s wireless sync. It does, however, offer limited chat capabilities and AV streaming via LAN.

The Zen X-Fi is similar in form factor to the Creative Zen, measuring 3.3″ x 2.2″ x 0.5″ and sporting a 2.5-inch LCD, but it has a metallic silver finish on back and a redesigned control layout. The player comes with 16 or 32GB of flash memory and has a full-size SD card slot for expandable storage; a WiFi-less 8GB is also available.

The player’s front is crowded with controls arranged in a 9-way directional keypad with familiar back and menu buttons above and shortcut and play/pause buttons below. The buttons aren’t backlit, and they’re very small, making the Zen X-Fi less than ideal for those with poor eyesight or large fingers.

The power/hold switch is on the back, and the 3.5-mm headphone jack and standard mini-USB 2.0 port are on the right. The full-size SD card slot is on top next to the integrated mic, and there’s a tiny built-in speaker is on the bottom for listening without the included in-ear headphones.

The Zen X-Fi’s standout feature is 802.11b/g wireless, with support for WEP, WPA-PSK, and WPA2-PSK secure networks as well as open ones. Although it lacks a Web browser or wireless sync, it can stream movies, photos, and music over a network via UPnP; setup requires simply turning on media sharing in Windows Media Player. Creative’s own media server hosts plenty of free content as well. Unsurprisingly, the player doesn’t work with Macs via USB, but we downloaded Twonky Media (www.twonkyvision.com) and set up a UPnP server on our Mac.

Our only gripes about the streaming are that you can’t rewind or fast-forward within tracks, and you can’t browse the media server while a song is playing.

The player’s WiFi radio isn’t particularly strong and doesn’t do well with walls; the signal dropped halfway when we went in the next room. But we were able to get at least one of four signal bars throughout a 1000-square-foot house, and lower power means less strain on the battery. (Our iPod touch gets a full WiFi signal throughout the same space.)

Once you’re on a network, you can create a profile — complete with customizable avatar — and chat online with friends via Yahoo Messenger or Windows Live Messenger. Text entry is a bit difficult with the Zen X-Fi’s tiny buttons and lack of predictive text, though Creative included a circular keyboard option that makes typing slightly faster.

With the surprisingly good in-ear headphones that come with the player, music sounds full and rich, though the low end is a bit muddy and sometimes overwhelms the midrange in bass-heavy tracks. Highs have good presence, and vocals come through clearly but not too in-your-face.

Creative’s X-Fi sound enhancer definitely livens up the sound, mostly by boosting the highs and the bass, but this implementation isn’t as customizable as it is in the company’s other X-Fi products. The Crystallizer made cymbals and saxes in acoustic jazz like John Coltrane’s Blue Train sound shrill, but Bob Marley’s Exodus actually benefitted from it, sounding a little more crisp.

The built-in speaker is only about as loud as a typical cell phone and extremely weak bass, but it gets the idea across.

Video and photos look great on the player’s QVGA screen, though you can’t output them to a TV, and most movies require conversion. We couldn’t tell the difference between streamed movies and those stored locally or on a memory card. We like that you can import photos from an SD card, but music and videos on the card are limited to playback only and can’t be transferred to the player.

The FM tuner supports 32 presets, and we got very good reception in and around the New Orleans metro area, even in a Central Business District full of tall buildings. The voice recorder works reasonably well via the tiny mic next to the SD slot; although an on-screen level meter shows you when you’re overloading the mic, you can’t adjust the input level or recording quality. You also can’t record FM radio and there’s no line-input for external mics or audio sources.

The organizer tools like calendar, tasks, and contacts sync with Creative Centrale are very basic but functional. Sadly, you can’t make edits directly on the device. The Windows-only Centrale software is easy enough to use, though it comes on a mini-CD, which doesn’t work in slot-loading drives.

The X-Fi’s battery life is pretty good, at about 36 hours of audio and 5 hours of video. We managed to run it down far quicker streaming audio from our computer, despite the low-power WiFi radio, easily plowing through a full charge in a single day. And as with most of Creative’s DAPs, the battery isn’t intended to be user-replaceable.

The Zen X-Fi doesn’t pose much of a threat to the far more versatile and user-friendly iPod Touch, but folks considering a Flash Zune might opt for the X-Fi’s larger maximum capacity (32GB vs. Zune’s 16GB) plus expandable storage. And Creative has been pricing its products more aggressively in recent years: $279 for the 32GB version is a steal compared with $399 for the 32GB iPod Touch. If maximum flash storage for the dollar is what you’re after, this is a good choice; if you can live without the WiFi features, the 32GB Creative Zen is even more budget-friendly.