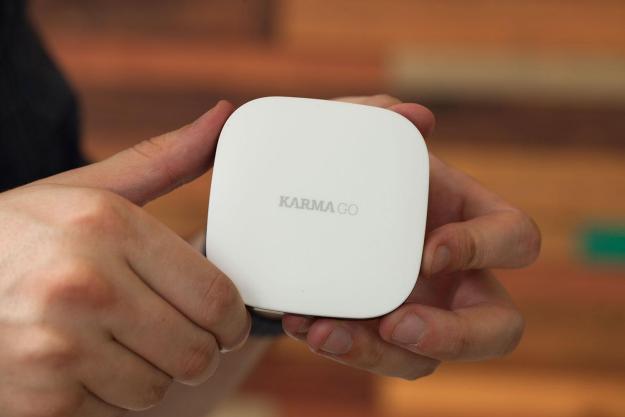 “For casual browsers on the move, the Karma Go is one of the cheapest, easiest ways to surf.”

Hunting for Wi-Fi hotspots sucks, which is why having a 4G LTE hotspot can make you a hero on road trips, vacations and business trips. But there’s just one problem with most of them: You’re paying for them whether you use them or not. You might sign up one month to use it for an event, then continue to pay month after month as it sits in a drawer.

But can Karma deliver the same solid connectivity as less flexible competitors from the likes of AT&T and Verizon?

If you recognize the Karma name, that’s because the company has already been around for years. The first generation Karma hotspot was released in 2012 and used Sprint’s WiMax network (which is being phased out on November 6th, 2015). The speeds were generally slow in comparison to modern 4G LTE speeds, and had never quite lived up to the lofty expectations set forth. Now, the folks at Karma have released a more modern 4G LTE device in a familiar — albeit sleeker — package.

The Karma Go is only slightly larger and heavier than the outgoing model, at a compact 2.3 ounces — compared to 2.08 ounces of the former. Gone are the unsightly black vents from the last model, and we are left with a rounded pocket-sized unit that can be stored in any center console, glove compartment, or laptop case. There is a power button and micro-USB charging port on one side to keep the 1,500mAh battery charged up for a quoted 5 hours of online time and 220 hours on standby. Circular LEDs on the side of the unit give indication of the battery level and signal strength of the wireless network.

Connecting to the Karma is more like joining a public Wi-Fi network at McDonalds, than joining your home network. Karma Go buyers first sign up for a free Karma account and claim the device on their account to get started. You start with a free 100MB of browsing data, and can purchase data in increments of 1GB for $14, 5GB for $59, and 10GB for $99. Unlike some of the other budget Wi-Fi hotspots, you are not required to give your credit card to sign up, and the data credits you purchase never expire. There are no tricks or “free trials” that Karma uses to charge you in the future like some of the competitors.

There may be hope for higher speed connections in the future, but don’t expect it at the moment.

You can also gain free data by referring friends to Karma. Up to eight devices can connect to the Karma Go at a time and use separate data accounts. When other users connect and register for free, they get 100MB to use on your hotspot or any other Karma device. For each person that signs up from your hotspot, you also receive 100MB. So be sure to spread the “Wi-Fi wealth” when around family, friends, or strangers in a restaurant.

When trying the Karma Go in my car, I would tell co-workers to connect and try it out as we drive to lunch. Just from a couple days of referrals, I was able to gain another 600MB of data to use on my account as needed. For those who will only use the Karma Go occasionally, referrals alone might be enough to keep you surfing for free. The Karma Go would also be a great benefit for an Uber driver, as they could offer free Wi-Fi to passengers and pile up heaps of free data for themselves in the process.

As good as free Wi-Fi sounds, the strength and speed of the network can make or break it. The Sprint network that the Karma Go is connected to is growing, but has long been the also-ran in the carrier signal strength and coverage contest. We pulled down strong signal driving around the Los Angeles area, but our test results showed an average speed of around 3 Mbps on download and 1.7 Mbps on upload. Our best result while testing the device came back just under 7 Mbps on download and 3.5 Mbps on upload. These results are slightly less than expected, as the Karma Go is advertised as having “download speeds of 6-8Mbps, including highs of 25Mbps. Upload speeds will be around 3Mbps.” This largely depends on the coverage in your area, and you may be able to hit the peak speeds more consistently in stronger areas.

The Karma Go is also capable of using Sprint’s faster (up to 60 Mbps) Spark LTE network, which should be rolling out to additional markets in the next several year. Just like any other cellular connection, you should expect signal strength in some buildings and in a crowded area to be poor. It’s a safe bet that if your cell phone doesn’t have a strong signal, then the Karma will struggle to connect — as we found trying to use a tablet connected to the Go while stuck leaving a crowded concert venue.

At $149, the Karma Go is on par with many of the other wireless hot spot competitors, and uses the same network and hardware. For those on the move, the signal reliability and connection speed should be just fine for casual browsing and light work while away from the office. With upcoming support for Sprint’s Spark network, there may also be some hope for faster speeds in the future – but don’t expect it at the moment.

If you need to use a hotspot frequently for business in varied locations, then you may want to step up to a monthly payment service from a stronger network like Verizon. For those who simply want to keep their devices connected on the occasional road trip, the Karma Go is the ideal solution to avoid monthly contracts and “earn” your data instead.