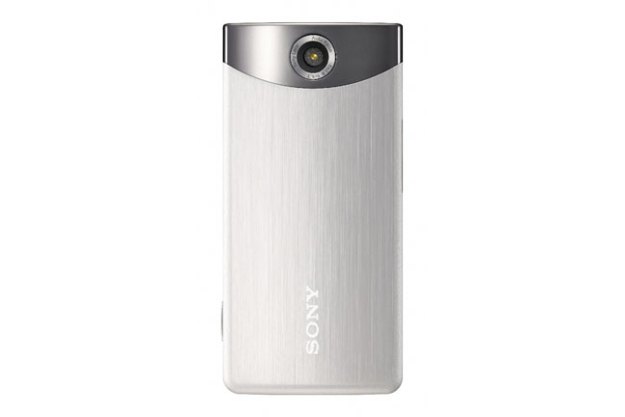 “Considering what you get for the price, the Sony Bloggie Touch stands among the top of its competition.”

While Cisco has shuttered its popular Flip camera division for 2011, Sony forges ahead full steam with no less than four Bloggie variants, including the venerable Bloggie Touch. The 1080p pocket cam emphasizes style and ease of use with an exceptionally sleek design and heavily touch-based interface, with recording capacities of either two or four hours.

The Bloggie Touch camera comes with 4GB of storage, shoots stills at 12.8 megapixels and video at full HD 1080p in MP4 format, features a 4x zoom, and has a 3-inch touchscreen. It weighs a mere 4.4 ounces, and like any good pocket camcorder should, slides easily into just about anything. Inside, the Bloggie Touch packs a Sony Exmor CMOS sensor, as well as face detection and SteadyShot image stabilization.

The Bloggie Touch makes a good first impression. It’s got a sturdy, quality feel; a significant upgrade from the plastic first-gen Bloggie, which felt more like a toy than a capable pocket camcorder. The 3-inch capacitive touchscreen doesn’t hurt either – although the screen was smudged to oblivion within moments of handling. Fingerprint-splotched display aside, the Bloggie measures in at 0.5-inches thin. It’s slim, sleek, and downright good-looking. The rounded profile slides easily into just about any pocket, and its sturdy build means you won’t have to worry about throwing it into a purse or bag. It won’t break or bend, but its chassis is easily scratched.

There is a serious lack of physical buttons on the camera’s body. You have a dedicated video record control directly below the screen, as well as a dedicated still photo capture and power buttons. There’s an HDMI output on the opposite side and a swing-out USB arm that easily pushes in and out. Other than that, it’s all screen.

When it comes to touchscreen-dependent devices, those used to tactile buttons might initially struggle with the unfamiliarity. Luckily, we found the Bloggie Touch’s display incredibly responsive. Of course, that means you have to put up with the aforementioned smudges, which unfortunately did not clear even with a thorough shirt wipe-down. If you’re particular perturbed by anything but a clear display, you might want to bring some screen wipes along with the Bloggie Touch.

Using the Bloggie Touch’s in-camera UI is easy enough to learn, and thankfully doesn’t crowd the screen. Playback allows you to view photos and videos and from there select sharing options. From the “home” screen, you are given timer, settings, screen size, and zoom options, all simple to manipulate via touchscreen. When not in use, all controls except your digital zoom toggle fade away, leaving you with more display for capturing video and stills.

The Sony Bloggie line has been marketed around the instant-share idea since its beginning, but the earlier models didn’t include anything more than the ability to use the USB-arm and forgo the need for a USB cable. Now it gets even easier, and you can simply checkmark which sites and even people you immediately want to share the photos and videos with. YouTube, Facebook, and Flickr are you website options, and there are designations like “My parents” and “My team” as well.

What did hamper this process was the lack of any connectivity options aside from the attached USB arm. We had issues on multiple desktops getting the computer to recognize and run the Bloggie Touch’s software, in fact, the Touch wouldn’t even appear as a mass storage device. Only after various tries and using the rear-located USB port were we able to pull up our images and video. This could easily be a glitch on our device, but were the USB arm to lose its functionality, everything stored on the camcorder would be stuck there. An SD card slot or microUSB port in addition to the USB arm would be a handy touch.

Nonetheless, once we found our workaround, using Sony’s software was simple and did its job as shortcut for choosing photos for Facebook and other various sharing options.

The discreet size and shape of the Bloggie Touch is easily one of its most attractive assets. Even the most pocket-friendly of pocket-sized point-and-shoots out there don’t have the elongated chassis and remarkably thin body of this device. Of course, you’re sacrificing important digital camera elements – flash and zoom capability being two of the more important functions. But for $180, the Bloggie Touch offers on-the-go recording and size efficiency at a reasonable price. Slinging the camera around your wrist or in a pocket is comfortable and it will fit in the smallest of purses. As we mentioned, it scratched more easily than we thought it would, and you’d be wise to keep its touchscreen protected. If it’s damaged or there’s some type of glitch, you’ll lose a considerable amount of the device’s functionality.

Shooting stills with the Bloggie Touch is obviously going to be a limited experience. It works best in extremely well-lit rooms or outside in daylight – although images are blown out very easily, so you want to be sure your light source isn’t directly behind your subject. The zoom toggle is used by sliding the designated icon on the touchscreen. It works well and the touchscreen is quite responsive, although we didn’t think this was optimal for taking quick shots, which is part of the Bloggie Touch’s lure – not having to fiddle with anything. That said, a number of pocket camcorders we’ve handled have been anything but fun and easy to use for shooting stills, and the Bloggie Touch was both.

The Bloggie Touch also worked best for stills when holding it horizontally, like (surprise!) a traditional point-and-shoot. Tapping the screen will bring up your options (self-timer, photo size, playback, and settings). These all quickly fade away to give you access to the device’s entire 3 -inch display. The shutter is located on the “top” (if holding it horizontally), next to the power button. We say this is the best way to use it because it puts the shutter control in a more natural location, easy for your index finger to find. When we held the camera in its “true” form (vertically), we found ourselves having to take a two-handed approach: Gripping the camera with one and pressing the shutter with the other. It’s mildly obnoxious and feels like a clumsy, unnatural way to shoot, but it’s not a huge concession seeing as most photographers won’t use the Bloggie Touch for their more serious or professional purposes. On the plus side, the screen rotates itself quickly to adjust with your choice of perspective.

Of course, Sony’s Bloggie line is not intended to replace the company’s point-and-shoot cans, and video recording is its bread and butter. The Bloggie Touch is built with this in mind, and shooting video is a more intuitive, one-step process. The bottom of the device features one of the camera’s three buttons, and is easily the largest and most distinct. It’s your designated camcorder control, and all you have to do is turn the Bloggie Touch on, click the button, and shoot away.

Fortunately, ease of use isn’t the only benefit to recording with the Bloggie Touch, and videos were high quality. Comparing its capabilities with that of full-size camcorders or the recording functions of DSLRs is a moot point, to be frank, and really what’s important is how it stands up to competitor pocket camcorders – and the Bloggie Touch easily holds its own against the top choices and bests many others. Your videos are clear, crisp, and smooth, and color hue is very natural. Like we mentioned with stills, it is easy for bright backgrounds to blow out images occasionally but this wasn’t a huge issue in our use. The only hang-up we got was when trying to use the zoom during recording: This was the only instance where it was somewhat jerky. If you do want to give it a shot though, we suggest holding down the “T” and “W” icons for a much smoother effect.

Taking stills while shooting is about as easy as it sounds, and requires users to simply press the designated shutter. A thumbnail of the image then shows up in the corner of the video while you continue to shoot.

But what would take this device to the next level would be the option to attach a mic. The audio was passable, and you could always clearly hear the sound you were intending to record, but wind and busy roads were picked up easily. There’s no output option for any sound accessories, a feature that would make the Bloggie Touch a viable option for more professional recording situations.

Pocket camcorders don’t have to live up to very high standards. Smartphones and recording capabilities of point-and-shoots largely take the place of such devices, and it’s easy to understand why so many consumers might easily dismiss such electronics. But the Bloggie Touch improves on the quality of most of these devices video recording without being an imposing camera with a steep learning curve. It’s easy to learn to use, but shoots video high quality enough that more experienced photographers and videographers won’t tire of quickly. Considering what you get for the price, the Bloggie Touch stands among the top of its competition.