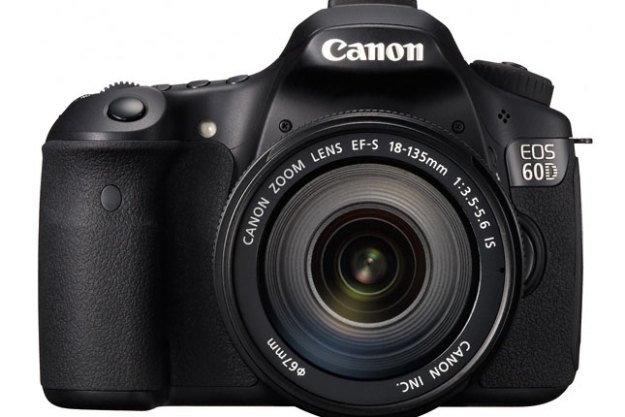 “The successor to the EOS 50D brings higher resolution, a handy swiveling LCD, and surprising performance even at high ISO speeds.”

What a difference two years makes in DSLR Land. The replacement for 2008’s 50D, the new Canon EOS 60D not only has more resolution, higher ISO capability and the ability to take Full HD videos, it even has a swivel LCD screen. Given all these improvements, the price happily remains the same. Let’s see if this $1,100 camera is worth the cash…

Front on, the EOS 50D and 60D could be twins other than the remote control sensor on the new camera’s pistol grip. Like the older model, the 60D is a dressed-in-black DSLR with a nicely textured surface. The hefty camera feels solid, as it should since it weighs about 1.5 pounds before the lenses are attached. You have a choice of 60-plus EF and EF-S lenses to choose from; we tested it with an EF-S 18-135mm stabilized zoom. Canon is always judicious with labels and decals so the 60D has a subtle vibe (if carrying a black brick around can be subtle). On the front you’ll also find an AF Assist lamp, lens release button, DC-in and a mono microphone. There’s an input on the side for an external stereo mic in case you want enhanced sound for your videos. Nice touches are audio level controls in the menu system. Speaking of GUIs, the menu system is the basic tree/branch format Canon’s used for years. It’s not an iPad but understandable and easy to use.

When you look at the top of EOS 60D you’ll notice a key feature that separates this type of DSLR from those targeted to newbies—it has a large status display. Since avid shutterbugs want to know exactly what their settings are, a quick glance at the LCD display does that. As you tweak the camera (ISO, metering, focus and so on) you can quickly see the changes. Press a button with a light blub icon near it, and the display lights up for making adjustments in the dark. On the left side is the mode dial and this has a new wrinkle. You must press the button in the middle of the dial to turn it since it locks into position. Canon said they did this in response to consumers whose dials moved during a session. This has never happened to us but if it makes people happy, why not? For the next go-round, Canon engineers should allow the dial to turn 360-degrees so you don’t have to turn it back-and-forth to access the 15 options ranging from auto, full manual and movie. Sitting behind the auto pop-up flash is a hot shoe and there are four buttons above the LCD display (AF, Drive, ISO and Metering) to access those features. Near these buttons is a nicely-positioned jog dial for advancing through options and an angled shutter button on the comfortable grip.

The back of the EOS 60D features the major design difference with the 50D. Instead of a fixed position 3-inch LCD monitor, the 60D has a vari-angle 3-incher rated 1.04MP versus 921K of the discontinued model. Tiltable screens are great for taking shots at different angles rather than just eye level. When you’re not using the screen, it can be turned inwards to protect the surface. Good stuff…

Of course you’ll find the viewfinder here with diopter control – it’s fairly bright with 96% coverage. A feature popping up on more cameras is an Electronic Level Display where an onscreen line appears, helping you take a straight horizon. It easily appears on the 3-inch LCD by pressing in the Info key in Live View but takes engaging a custom key setting to see it in the lower part of the viewfinder; it’s not as cool since it just shows angle intensity (1-9) not a line like you’d see in a flight sim. It’s helpful but not nearly as good as the LCD display. The Sony SLT-A55V has this in its viewfinder screen because it’s an EVF rather than the optical viewfinder used in most other DSLRs.

Another difference between the 50D/60D is the red dot record button for HD videos found here. Unlike a digicam where you simply hit the record button and capture movies, with this DSLR you need to turn the mode dial to Movie, then hit the button. It’s just an additional step, no big issue. We did have an issue with the new 8-direction Multi-Control Dial which is within the larger Quick Control Dial. It’s not very intuitive as to what this inner dial controls (it’s used to select AF points among other things). From left to right you’ll see easily understandable keys for on/off, delete, menu. Info, playback, Q for quick access to camera adjustments which vary by mode, AF on and zoom keys to closely examine images.

On the right side is the SDHC/SDXC card compartment while the left has a small speaker and external mic, mini HDMI, USB and remote control ins/outs. The bottom of the Made In Japan ESO 60D has a metal tripod mount and the battery compartment.

In the box is the 60D body, battery and plug-in charger. The battery is rated 1,100 shots per CIPA just using the viewfinder. Engage Live View only and it drops to 320. In other words, if you think you’ll use the LCD most of the time and you plan being out in the field all day, a spare makes sense. You also get a neck strap, USB and stereo A/V cables (the latter is a total waste of resources in this HDMI Age). There’s also a 324-page Instruction Manual, pocket guide and two CD-ROMs. One disk has software for handling files and the second has the instructions for the programs.

Since this DSLR takes Full HD videos, a Class 6 or better card is the order of the day. We popped in a 4GB card, attached the supplied 18-135mm USM IS lens and hit the streets.

We shot many subjects indoors and out, including a wedding, reeling off hundreds of images. Before getting to results let’s state that the EOS 60D has an excellent, sturdy feel with a solid handgrip with controls in the right spots. Having the LCD status display is a real plus for making adjustments on the fly.

Once done, it was time to download everything to the PC, make prints and examine the files (100% plus) on the monitor. Since this is an 18-megapixel DSLR with an APS-C sized sensor, images were excellent. Full-frame DSLRs like the Canon 5D Mark II still deliver the best you can get, but those cameras are twice the price and in true nosebleed territory. At a grand—plus your lens investment—you’ll be quite happy with stills taken by the 60D. Colors were rendered quite nicely with details that almost seemed three dimensional. Of course, no camera is perfect. Using Auto White Balance indoor images tended to be a little warm. Switching to indoor tungsten made them much more accurate.

The camera hits 6400 ISO in its native mode but this can be boosted to 12,800 by enabling a custom function. Our tests showed that unlike a point-and-shoot, you could actually make a small print at the five-figure level which is pretty incredible. Photos of a resting cat in dim light were decent at 6400; it’s here RAW shooting and tweaking helps in a big way. Bottom line: as a still camera, the EOS 60D is a winner.

We shot our requisite number of Full HD video clips, viewing them on a 50-inch plasma via HDMI. The color quality was good and overall the results were far better than the Nikon D3100 recently reviewed (30 fps versus 24 will do that). We weren’t too thrilled with the supposed full-time autofocus on the Nikon. Canon doesn’t make such claims and your best bet it adjusting focus manually using the lens ring. When subjects are the same distance, this isn’t much of an issue but it they move away or toward you, you have to put your Hollywood Director of Photography skills to use. In time you’ll get it down, using the enlarge button on the back to zero in on your subject but it’s an effort; Sony’s A55V and A33 still do it the best for focusing accuracy and quality. Other negatives include a mic that makes wind sound like a 787 at takeoff but you can add an optional microphone for better results.

The 60D is fairly similar to the new Nikon D7000 ($1,195 body only) with its 16.2MP resolution, 6 fps, 6400 ISO and 1080p HD video at 24 fps. We’ll be testing that one soon and let you know which one wins the prize. If you’re a Canon fan, you can’t go wrong with the EOS 60D with its superior image quality. The HD video is problematic, especially focusing on moving subjects. This is the case with any DSLR using contrast phase detection. Please keep these limitations in mind if you plan on shooting lots of video. For stills, you’ll have a ball.