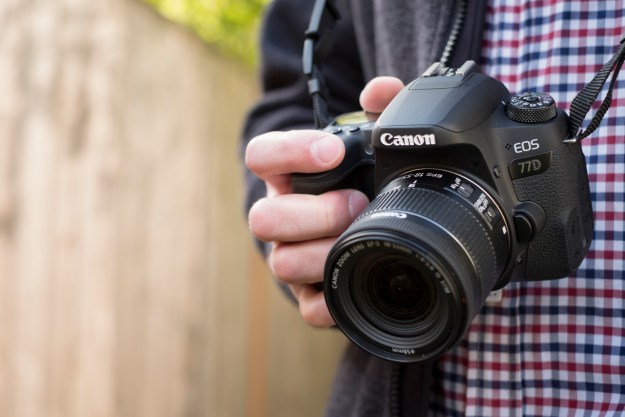 “The 77D is a Rebel T7i in fancy clothes, but that might be enough for the right user.”

In an apparent attempt to hit every possible price point, the $899 (body only) Canon EOS 77D splits the difference between the entry-level Rebel T7i ($749) and the enthusiast-focused EOS 80D ($1,199). Looking at the spec sheet, it comes across as an awkward middle child, offering the same performance numbers as the T7i without the affordability or compactness. It’s in a unique position, however, as Canon’s main competitor Nikon doesn’t have a directly competing model. Still, it feels like a bit of a gamble.

To improve the odds, Canon has thrown its latest imaging tech into the 77D, including the 24-megapixel sensor and 45-point autofocus system used in both the 80D and T7i. It also gets the newer Digic 7 processor, which is actually an improvement over the Digic 6 in the 80D — but, again, this is also found in the lower-cost T7i.

Based on our experience and long-term testing with these cameras, we were confident this new midrange DSLR would at least be a capable machine, and that’s what we found in our Canon EOS 77D review. But does Canon really need this in its lineup?

The 77D certainly looks different from the Rebel T7i, and that’s really the whole point. It is a Rebel in a fancy suit, with all the same internal workings; it even uses the same battery. What it adds is a larger, more comfortable grip and more direct access control, particularly a second command dial on the back of the camera. The dial is much cheaper and flimsier feeling than the rear dials on higher-end Canons, but it gets the job done and allows users shooting in manual mode to set the aperture without needing a modifier key.

You also get a top LCD display that provides all the standard information: battery life, shots remaining, exposure settings, etc. What hasn’t been changed is the optical viewfinder, and this is a big knock on the 77D. It uses the same pentamirror finder as the T7i, with just 95-percent frame coverage and 0.82x magnification — acceptable for a starter DSLR, but not in an enthusiast camera like the 77D. By comparison, the 80D uses a true pentaprism finder with 100-percent coverage and 0.95x magnification, which makes it much more comfortable on your eye.

Still, if you’re a bit more inclined toward optimism, you could think of the 77D as a slightly downgraded 80D, rather than a souped-up Rebel T7i. Either way, it bridges the size and control gap between those two cameras, but in terms of performance, it’s all Rebel, right down to the 6 frames per second (fps) burst rate and 1/4,000th-second maximum shutter speed. Video, too, is unchanged at 1080p/60.

The 77D offers the exact same performance numbers as the T7i without the affordability or compactness.

To be sure, this is not necessarily a bad thing. The Rebel T7i is one of, if not the best low-end DSLRs we’ve ever tested. In fact, we even called it “an 80D in disguise” in our review. So the 77D is a disguised 80D in a fancy suit. Or something. See, now even we’re confused.

And herein lies the problem: Using the same naming convention as the 80D makes the 77D sound like more than it actually is, and it’s confusing. Compare this to the previous generation, when Canon had both a Rebel T6i and Rebel T6s. Here, the latter was essentially what the 77D is, albeit in a compact Rebel body.

It’s not that Canon is trying to pull a fast one by giving the 77D a name it doesn’t deserve. We understand why it can’t be called a Rebel — it’s definitely not the same body style. That said, nor is it really an 80D-style camera. Once you realize that, however, it’s okay. Canon seems to have discovered that enthusiasts who liked the added control of the T6s would also appreciate a larger camera body, and we have to agree — the 77D certainly has superior ergonomics to a Rebel.

While enthusiasts will definitely prefer the feel of the 77D over a Rebel, without a larger viewfinder, it fails to improve on one of the few complaints we had with the T7i. Given the availability of excellent mirrorless options at this price point, like the Fujifilm X-T20 and Sony A6300, the one thing we really want in a DSLR is a gorgeous optical viewfinder. The 77D simply does not deliver that.

Any old optical viewfinder used to be better than an electronic one, but that no longer holds true, at least not in our opinion. DSLR manufacturers need to produce better viewfinders in their low and midrange cameras, particularly if they don’t plan to compete on specs with mirrorless models (the aforementioned X-T20 and A6300 both outclass the 77D in some areas, with 4K video and faster burst rates).

The 77D does, however, provide an enjoyable shooting experience in most other respects. The 45-point autofocus system is just as impressive here as it is in the 80D and T7i, and Dual Pixel Autofocus (DPAF) provides smooth and accurate focusing in live-view mode, including video. There’s a mic input for capturing higher-quality audio, but Canon cameras tend to have so-so preamps built-in, so get yourself an external mic with an adjustable preamp.

Dual Pixel Autofocus is the 77D’s one saving grace when it comes to video..

Video remains one area where Canon simply hasn’t impressed us now for a long time. The 1080p footage isn’t up to par with what other cameras are producing today. Even Nikon offers 4K on several of its DSLRs now, including the D7500 (which competes more with the 80D, but is closer to the 77D). Yes, 60 fps is nice, and the fully articulating monitor makes high- and low-angle shooting a breeze, but neither of these features are enough to draw serious video shooters to this camera.

However, DPAF is by far the best live-view AF system of any DSLR and easily stacks up against advanced mirrorless AF systems, as well. This is the 77D’s one saving grace when it comes to video.

As for still image quality, it is predictably good, with rich RAW files that offer plenty of latitude for editing in post. Pixel peepers will point out that dynamic range and noise performance are not best in class, but we wouldn’t worry. Pair this camera with a good lens, and you’ll get excellent results.

Speaking of lenses, we mostly shot with a full-frame 24-105mm f/4, but also used the 18-55mm f/4-5.6 kit lens. We aren’t huge fans of the kit lens, and it looks a bit out of place on the larger 77D body, but it does provide good image stabilization and fast and quiet AF in both live-view and viewfinder shooting. If you want a simple lens to kick around for casual shooting, opting for the base 77D kit isn’t a bad choice.

Canon offers a one-year warranty on all DSLRs and lenses.

The 77D is a nice midrange DSLR, but it’s held back by a small viewfinder and a spec sheet that is identical to the Rebel T7i. It produces great images (and so-so video), but you can get exactly the same performance for less money by going with the T7i.

Of course, putting in a larger viewfinder or upping performance just a smidgeon would have really blurred the line between the 77D and the 80D. Again, this camera finds itself in an awkward middle ground, reaching for that user who’s outgrown a Rebel but can’t quite afford the higher-end features of the 80D (and who doesn’t want a mirrorless camera).

There is no direct alternative in the DSLR world — the Ricoh Pentax KP might be close — but there is certainly some weighty competition from the mirrorless sector. We would lean heavily toward the Fujifilm X-T20, but if the larger grip of the 77D appeals to you — or if you simply must have an optical viewfinder — then the Canon might be the way to go.

But which Canon? The T7i and 80D are themselves worthy alternatives to the 77D. The T7i is cheaper and more compact, and the 80D has the better viewfinder, faster burst speed, and higher capacity battery (960 shots compared to 600). Granted, the battery capacity is still stronger than ones found in mirrorless cameras.

The 77D doesn’t feel as robust as the 80D, but its polycarbonate body is sturdy enough. As a still camera, it should last you a decently long time, but it is already outclassed on the video front by other cameras in the $800-$1,000 price bracket.

If you already own a newer Rebel and are looking for an upgrade, we would caution against going with the 77D. Instead, bide your time and save your money for the 80D (or whatever successor comes along), which is a true upgrade and offers a better shooting experience thanks to the larger viewfinder.

However, if you are looking for your first DSLR or are upgrading from a much older model, the 77D is not a bad choice. We did genuinely prefer using it to the Rebel thanks to the improved control and ergonomics. At the time of writing, a $100 instant rebate also lowers the body-only price to $799 — just $50 above the T7i. This rebate may disappear after November 4, but until then, it kind of makes the 77D a no-brainer to anyone trying to decide between it and the T7i, unless the compact Rebel body style is more important than additional direct access control.