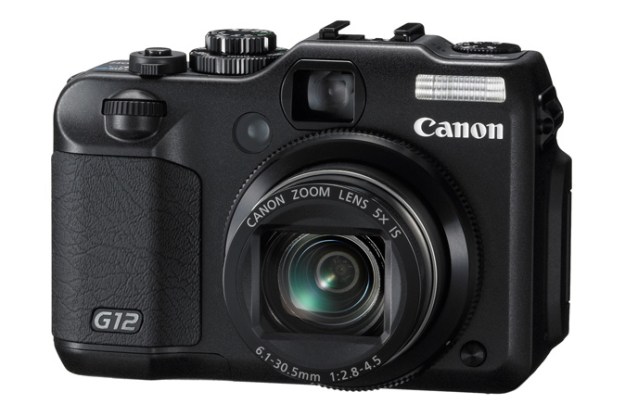 “Canon's G12 introduces HD video recording, in-camera HDR capabilities, and a number of other subtle updates to the well-respected, but expensive, G series.”

Ferraris get updated every few years. And so do Canon’s “G” series point-and-shoot cameras. Last year we tested the G11 and liked it a lot, but it still had some drawbacks, notably the lack of high-def video recording. The company rectified that problem with the new 10-megapixel G12, and even added a few tweaks that’ll please many shutterbugs. Let’s see what they are, and if the G12 is worth nearly 500 clams.

Put the G11 next to the G12 and at first glance they’re nearly identical, other than a changed model number. The G series doesn’t sport day-glo colors or the thinness of an iPhone. It’s big, bulky and looks quite old fashioned. In fact it looks almost like the new Nikon Coolpix P7000, another $499 digicam marketed to serious photographers. Check out the photos and you’ll see this is not a frivolous piece of gear. It measures 4.4 x 3 x 1.9 (WHD, in inches) and weighs 12.4 ounces without the battery and card, nearly a pound fully loaded.

Look closely on the front and you’ll see one of the improvements—a handy jog wheel right below the shutter. You’ll use this to make adjustments such as aperture and shutter speed when you move out of auto. Also on the front is a 5x optically-stabilized zoom with a range of 28-140mm. We liked this lens in the past, and it’s still a winner. Would we like a longer reach like the P7000’s 7.1x 28-200mm? Sure, but it didn’t feel like we missed much during our tests. Also on the front is the flash, porthole for the optical viewfinder and autofocus-assist lamp. A release button lets you take off the ring surrounding the lens to add optional conversion lenses.

The top has dials that transport older shooters to the good old days of film cameras. The only thing missing is a crank to rewind film! On the far left, you can adjust exposure compensation with a small dial, then move past the hot shoe and tweak ISO (auto through 3200) with another dial. Sitting atop that one is the main mode dial. Here are your key shooting options including Smart Auto, PASM, two custom settings, low light, high speed, scene and movie. Nearby is the power button and shutter, surrounded by the zoom-toggle switch.

With Smart Auto, the camera guesses what type of subject is front of it and chooses the settings. It does this well. PASM stands for Program AE, Aperture/Shutter Priority and full Manual. Low light drops the resolution to 2.5 megapixels for low-noise shots in candlelight, while high speed supposedly takes a shot quickly (this is not true burst shooting, and is pretty useless). Scene gives you access to 20 options, from the usual portrait and landscape options to more unusual ones, such as fisheye and miniature. The one new choice of note is HDR — High Dynamic Range — which we’ll discuss shortly. The movie option is a definite upgrade, with the camera now taking 720p HD video, versus VGA (640 x 480) video on the G11. It also captures stereo audio, which adds fuller sound to your clips. Surprisingly there’s no direct red video button as found on so many 2010 digicams. Canon should re-jigger that with the G13 — or whatever the next model will be called.

The rear of the G12 is the same as the G11. The key features are the 2.8-inch vari-angle LCD screen rated a very good 461K pixels, and an optical viewfinder with diopter adjustment to use if the screen wipes out — it rarely does — or you want to be old school and look through the viewfinder. There are the usual buttons, including a four-way controller surrounded by a jog wheel. On the right side are mini HDMI and USB outs, while the left has a tiny speaker. The bottom of the Made-in-Japan G12 has a metal tripod mount, and the compartment for its battery and memory card. The camera accepts the newer SDXC media, and you should use a Class 6 card or higher for best results.

The G12 comes packaged with a battery rated good for 370 shots using the monitor, a plug-in charger, USB and A/V cables, as well as a neck strap. It has a 36-page Getting Started guide and the full Owner’s Manual is on the supplied CD-ROM, which also has Canon software for handling images and developing RAW files.Performance and Use

Like the S95, G11, and Nikon P7000, the PowerShot G12 has a 10-megapixel CCD, which is larger than the usual digicam sensor (1/1.7-inches vs. 1/2.3). Fewer and larger pixels result in good color with less noise at higher ISOs — and 10-megapixels is more than enough for large prints. Canon started this trend about a year ago — getting off the megapixel merry-go-round — and should be commended for it.

We kicked off shooting full resolution JPEGs (3648 x 2736 pixels) in Smart Auto, then proceeded to move through the mode dial, switching to RAW when the subject presented itself. Autumn has hit the Northeast, so we had the chance to capture some colorful leaves. Along with the typical clichés, we took people shots, landscapes and performed other tests.

Once done, the images were viewed full screen on a monitor, 8×10 prints made, and videos reviewed on a 50-inch plasma via HDMI. Before getting into the specific results, let’s say the G12 is a real pleasure to use. Controls are in all the right places, the menu systems easy-to-follow, and it has the heft that lets you know you have a real camera in your hands. The vari-angle LCD is very good, rarely wiping out in direct sunshine, but it would be nice if it were larger. The camera’s optical image stabilization system is among the best we’ve used, plus the G12 has more tweaks than most people would ever want. As an added bonus, the camera grabs two frames per second versus the 1.1 fps of the G11. You still won’t get rock-solid focus of moving subjects, but it is a definite improvement.

One of the highlights of this camera is the HDR option in the scene settings. High Dynamic Range combines a series of three photos which results in wider dynamic range. This means there’s less noise, a wider color gamut and much more detail. The results are outstanding, but note this is for static subjects only, as Canon recommends a tripod when using it. We rested it on a counter while shooting similar shots of a lit candle in Low Light mode and then HDR. Results were truly night and day, with much less noise, larger file sizes and detail that were stunning. If you can get your kids or spouse to sit still long enough, you’ll get some great portraits.

With the low light 2.5-megapixel setting you can handhold the G12, a real positive when shooting a birthday party. While in this mode, ISOs range from 320 to 12,800; it’s 80 to 3200 in all others. The results were very good, especially at the lower settings. An 8×10 of a 12,800 ISO image was pretty good, which is incredible when you think about it. Naturally, ISO 320 was much better, and HDR simply blew it away.

Everything isn’t paradise with the G12. We were a bit disappointed at some higher ISO shots of our test subject (a multi-colored beaded lampshade). If you stay below 800, your large prints should be fine.

Photos taken outdoors with lots of daylight were right on the money, as you’d expect from Canon’s top-of-the-line point-and-shoot. The camera captured the crisp blue skies, bright red and yellow leaves, as well as excellent detail of foliage and macro close-ups of the last butterflies of the season.

Videos were a good 720p, without too much blocking and digitization. It’s not AVCHD, but the clips are sufficient for capturing motion memories. The G12 is first and foremost a camera and quality stills is its raison d’être. As such, it delivers the goods.

No surprise here — the Canon PowerShot G12 is an excellent camera with HD video that will appeal to loads of enthusiasts. But — and this is a big but — for around $100 more you can get a Sony NEX-3, a very compact camera with a much larger 14.2MP APS-C sensor, interchangeable lens capability, 720p video and seven frames per second burst shooting. There are also Micro-Four-Thirds interchangeable lens cameras from Olympus and Panasonic, plus Samsung’s new NX100 also has a DSLR-sized sensor and optional glass. If you’re looking for a quality camera at the $500-$600 level, you now have more choices than ever. The PowerShot G12 does give you the 28-140mm focal range without the hassle of swapping lenses and spending a tidy sum for the zoom of your choice. With the influx of compact interchangeable lens cameras, we may be seeing the end of the era of the fully-featured, high-priced point-and-shoot. While it’s easy recommending the G12, it’s not the slam dunk it used to be.