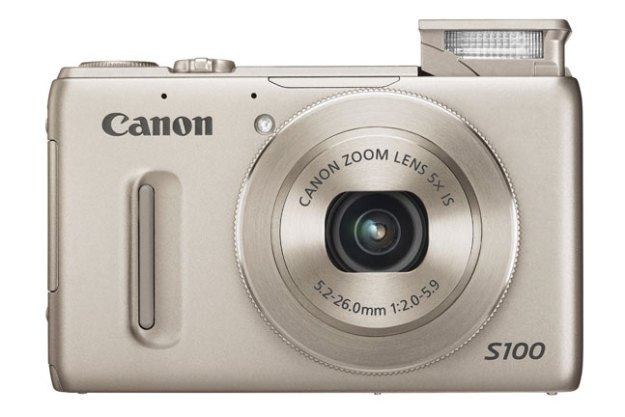 “Pocket shooters looking for more of a challenge or advanced photographers who want a capable point-and-shoot will be fans of the S100's capabilities.”

The Canon PowerShot S100 is the next evolutionary step for Canon’s premium PowerShot S-series lineup, and true to form the manufacturer packs it full of compact goodness. Like its predecessors, the S100 is a slim, sturdy camera that outdoes itself in poorly lit situations, performs well at high ISOs, and most importantly, yields high quality images.

But is the S100 more of a stepping stone than a must-have? In addition to all these upgrades it also comes at a steep price, one that might make you start considering a new superzoom or Micro Four Thirds (MFT). Read on to determine if the perks justify the price.

If the Canon PowerShot S100 is anything, it’s full featured. Canon outfits its high-end point-and-shoot with a slew of shooting capabilities, in a slim yet sturdy package. With a bit of a boxier look than the PowerShot S95, the S100 adds a little heft and some new design elements.

The next-gen model has a 5x zoom, improving on the S95’s 3.8x, and also upgrades to a 5.2-26mm lens. It includes the same control ring, a function we loved using and a popular feature of the S95. You use it to adjust a variety of settings, depending on what mode you’ve chosen to shoot in.

The S100 doesn’t have quite as sleek of an appearance as the S95, which comes at the cost of a mini-grip on the front. This thin strip runs down the face of the otherwise completely smooth camera, but actually does give shooters a good handle on the device. The back of the camera also has a thumb grip that the S95 did not have, meaning you’re looking at a little more clutter.

There’s a subtle new button design for the S100 as well, although there’s nothing drastic about these changes. There’s a dedicated video record button, as well as a button to designate ring function. The playback and menu have both been rearranged, but otherwise you’re looking at basically the exactly same setup: Power button, model dial, shutter, and zoom toggle on top, with the in-camera navigation dial on the back. Like we said, it’s not as smooth and barren as the beautifully simple S95, but that doesn’t mean it’s overwhelming either. We just understand that the smooth aesthetic has been one of the S95’s most lauded features, so be prepared to give some of that up.

Luckily, you’re getting some upgrades in return. In addition to a 5x optical zoom, you’re getting 12.1 megapixels, improved ISO sensitivity, GPS, and in relatively the same size with the same, crisp, bright 3-inch LCD display. The S100 also has a pop-up flash, which is becoming more and more critical in compact cameras.

While the camera’s features and design are generally spot on, we will say one accessory that would really push the S100 into the next level would be a hot shoe port. For its price point, this would really make it a better sell, so you could use a viewfinder or external flash. This is becoming more and more expected in cameras of a certain category.

Otherwise, Canon outfits the S100 with what we’ve come to expect from the brand. It has a quality, improved CMOS sensor in a small, pretty package.

In addition to your camera, you get the NB-5L battery pack, a battery charger, wrist strap, USB interface cable, and the included CD-ROM software.

Right off the bat, we can tell you that shooting with the S100 is a pleasure. In addition to fitting nicely in your pocket or purse, it feels good in your hands. While we really don’t like the included wrist strap (it’s inflexible and seemed to get in the way more than help), the S100 was easy to pick up and shoot with without much thinking.

Of course that’s if you’re using Auto or presets — which do just fine. Moving on to manual will require a little more effort. You can choose whether the ring controls exposure, ISO, focus, white balance, and so on. In general, using this to manipulate photo settings was quick and easy.

As expected, the S100 handles poorly lit situations well, and images are remarkably clean. Cameras are rarely usable at their max ISO (in the S100’s case, 6,400), which is true of the S100 as well, but to its credit photos held up better than most we see.

In general, the only complaint we have about image quality is the saturation and hue. Canons tend to over-saturate and err toward warmer tones, and this remains true of the S100. It’s a subtle distinction, and one that most users won’t notice until they are comparing them to those from another camera, but for more serious shooters it could mean slightly more editing time.

The most noticeable improvement in the S100 over its predecessor is easily its speed. The S95, as wonderful as it was, was not a fast camera. But the new DIGIC 5 processor means the S100 is bumping things up a bit: Startup to capture is approximately two seconds, and shutter lag has been cut down to roughly a quarter of a second. Is it the fastest point-and-shoot on the market? No, but it’s fast enough not to be a problem, and to dissolve some of the sacrifices shooters made with the last iteration. Canon isn’t breaking any barriers here with compact camera speed (which is becoming more and more important and a bigger selling point in this bracket), but the S100 certainly isn’t being held back in this department.

On a more positive note, the built-in GPS function is a nice surprise. Feature likes this and auto-share don’t tend to intrigue us: The smartphone as a camera has changed photography and manufacturers are sort of experimenting with integrating what’s popular about this revolution, and most times we think they are novelties at best. That said, the S100’s GPS is a nice, simple way to geotag your photos and doesn’t go overkill with Facebook integration or auto upload.

Video has also been upgraded in the S100. The camera shoots crisp, clear 1080p video at 24fps, and in general AF wasn’t too noticeably laggy or loud. We were also pretty happy with how smooth zooming was while recording. For standard point-and-shoot recording use, you’re fine, but for any particularly fast-paced, action-packed scenes you’ll want to bump it down to 720p at 30fps. It’s a trade-off, obviously, and you’ll have to sacrifice image quality.

Be forewarned, however, that all of these big upgrades come at the cost of battery life. We needed to recharge after three hours of shooting, with the GPS only in intermittent use. Be sure you don’t leave GPS on, and know that the faster processor translates to keeping your camera charged or carrying an extra battery around with you.

The S100 is the next step in Canon’s PowerShot lineup — and this is a good thing and a bad thing. All the necessary tweaks and upgrades are there: faster processor, bigger sensor, reduced noise, and fun features like GPS to boot. Don’t get us wrong, these are all great improvements, but they mean this is sort of an in-between the S95 and whatever comes next.

Its price point makes it a similarly hard sell, given that there are a few MFT cameras as well as some superzooms out there for not much more money. $430 is a lot to spend on a point and shoot. But even though the price and in-between-feel put it in something of an awkward place, no one can say the S100 isn’t a high-quality device. The picture and video quality speak for themselves, and it remains a fun, easy, and versatile camera to shoot with. Pocket shooters looking for more of a challenge or advanced photographers who want a capable point-and-shoot will be fans of its capabilities.