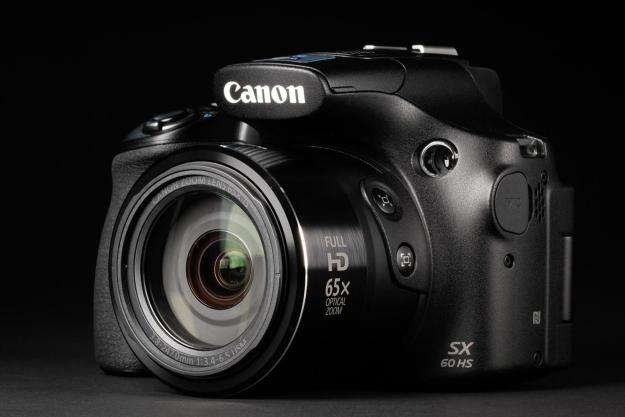 “With a 65x zoom lens built in, Canon’s SX60 HS may have casual photographers asking, “what DSLR?””

In September 2014, Canon gave its camera lineup a serious refresh by introducing the EOS 7D Mark II for the enthusiast/pro DSLR market and the G7 X, a great pocket digicam for those who want power in a small size. Part of the new unveils also included its latest mega-zoom, the PowerShot SX60 HS ($550 MSRP) that’s much more potent than the model it replaces. How strong? This one has a built-in 65x zoom compared to a “mere” 50x for the older SX50 HS. We’ve always had a soft spot for mega-zooms (a.k.a., super zooms or bridge cameras), as they make great vacation cameras that balance long zooms with ease-of-use; the SX60 HS certainly fits that description, but not without a few drawbacks.

When it comes to mega-zooms, the number-one spec is focal range. With its 65x optical image stabilized lens, the SX60 hits 21-1,365mm – far more than the 50x 24-1,200mm of the older SX50 (which is still available for $429 MSRP). Canon also just topped the 63x Sony DSC-H400 ($319 MSRP) albeit with a different 24.5-1,550mm focal range. Regardless, getting so close to a subject from faraway, without an interchangeable lens, is pretty cool. And mega-zooms offer excellent value to someone looking for an all-in-one camera that handles lots of situations – from wide landscapes to the classic faraway bird sitting in a tree.

The SX60 retains a similar form-factor to the SX50 as well as the older SX30 and SX40. It is a classic mega-zoom design: It looks like a DSLR but doesn’t have the heft, large sensor, or the ability to swap lenses. But with a 65x telephoto built in, it’s highly doubtful anyone would feel shortchanged when it comes to zooming capability. And, you’re giving up a lot of quality versus a DSLR, but there’s no need to lug around a bag full of lenses, which is great for those on the go.

The lens extends a good 4 inches when at full telephoto but in the off position, the camera measures 5 x 3.65 x 4.5 inches and weighs nearly 23 ounces (including battery and card). It’s not small like a pocket camera, but we had no issues carrying this around through our jaunts. The grip has a faux-leather non-slip finish we found comfortable but as always, you should do your own hands-on.

On top of the camera, there’s a pop-up flash, two large stereo mics, and a hot shoe for optional accessories such as a quality microphone. The camera even has a dedicated mic input, putting it above cheap but no-frills mega-zooms. There is a shortcut buttons that you can assign any of 17 options (we chose white balance). Nearby is a dial with 13 settings for Smart Auto, PASM, Scene, Movie, and other shooting modes. There is also a large jog wheel that’s convenient for navigation purposes.

The PowerShot SX60 HS is much more potent than the model it replaces.

On the back is a 3-inch vari-angle LCD rated 922K dots, a major upgrade from the 2.8-inch 461K display of the SX50. The electronic viewfinder (EVF) is far better too, at 922K compared to the SX50 EVF’s 202K. There’s a diopter control to fine-tune the EVF, but there’s no eye sensor – you have to hit Display on the four-way controller to switch between the LCD and EVF. Inconvenient it may be, but it’s not a deal breaker. We think most users will choose between one and the other, although the LCD is more effective for videos. Beside the LCD are the typical camera function buttons and four-way controller. One button of note is the Mobile Device Connection; press this and the camera pairs with your smartphone (after an initial setup).

As you probably guessed, the SX60 has Wi-Fi and NFC, or near-field communication (used for pairing with select Android devices), which lets you transfer/upload images via an iOS or Android device, as well as operating the camera remotely. We found the NFC pairing to a Samsung Galaxy S5 effective, as well as using the app’s functions.

The right side compartment has connections for a remote, USB, and HDMI, while the left has the mic input, speaker, and NFC tag. On the lens barrel are two important keys, especially when using extreme telephoto: Framing Assist Seek and Framing Assist Lock. These help you get back to your critical focus point (more on this in the Performance section).

On the bottom is the battery compartment and SD card slot. Definitely use high-speed, high-capacity media. The battery is rated a solid 340 shots in normal mode and hits 450 if the Eco setting is used. We’re not fond of the latter since it shuts down the camera too quickly, but if you’re running out of juice, it’s handy.

The Canon PowerShot SX60 HS comes with a lens cap (with self-attaching string), strap, battery, and plug-in charger. Also in the box is a quick-start guide. Canon has recently stopped including USB cables with many models, so you’ll need to bring your own. Ditto for software, which can now be downloaded from Canon’s website. The mobile app, CameraWindow, can be downloaded from the iTunes or Google Play stores.

Canon offers a limited one-year warranty for parts and labor.

Among its improvements, Canon bumped the SX60’s resolution to 16 megapixel, up from the 12MP of the SX50. But realize this is a 1/ 2.3-inch sensor that’s typically found in compacts. With nearly all mega-zooms, you’re essentially using traditional point-and-shoot camera guts but with a souped-up lens. Even though it looks like a DSLR, the photo quality is not comparable to that of interchangeable lens cameras. That’s not to say the SX60 isn’t capable of great photos, but just keep your expectations in check, as we did.

Canon added two helpful features to help with framing and clarity at telephoto.

Our setup: We used the mega-zoom over the course of several weeks, visiting two Arizona lakes hoping to catch some close-ups of wildlife up in the hills, along with some Southwest landscapes. We started off in Smart Auto, and then used other options on the mode dial – taking stills and videos. We also set the camera to the fastest burst mode, which is 6.4 frames per second (fps) for over 30 shots; speed drops to around 4 fps if you choose Continuous AF, which is still good. These speeds are possible thanks to Canon’s newer Digic 6 processor. The Digic 5 in the SX50 was only good for 13 fps for just 10 shots and 2.2 fps with continuous AF.

We put the camera through some very challenging trials, including an attempt to take videos and stills of water skiers and speeding boats while we were zooming by in a boat ourselves. The camera may have optical image stabilization but there’s no way you can eliminate blur in these instances – especially bouncing over wakes. Cruising on a much bigger and slower craft enabled us to add some stability to the situation and the images from the high-speed bursts were better but nothing great. Even when we were on solid ground the camera had some problems quickly grabbing focus at extreme telephoto. There’s no getting away from the fact that more advanced AF systems of DSLRs and CSCs are required if you want crisp action photos. But for most users, this is not an everyday situation.

One of the most difficult things in using a mega-zoom is reacquiring your subject when you’ve zoomed to the max; a slight move and you will have lost your target. With Canon’s Framing Assist Seek, you simply press the button on the lens barrel and the lens zooms back a bit, putting a frame around the original target so you can zoom into your subject again. This is an excellent feature we’ve appreciated in the various iterations of this series. Another useful feature is the Framing Assist Lock, which helps reduce camera shake at full telephoto. When you are locked onto an object or subject, holding this button brings up a more robust version of image stabilization; while holding the button in, you simply push the shutter to snap the stabilized shot. These two are not settings to use on the fly, however. We tried it in that moving boat and were bouncing all over the place. Even so, we grabbed a helicopter flying overhead since we had the camera in high-speed burst mode (see sample). Sometimes you just get lucky but by using the camera methodically, you can come up with some real keepers (as we did with a bird that remained still long enough).

As for your basic landscapes and less extreme telephoto shots, the SX60 performs in the classic Canon style. This means accurate colors that are quite pleasing. (Canon isn’t the number-one camera company in the world for nothing.)

The SX60 HS captures 1080/60p movies, which is a big upgrade to the 1080/24p of the SX50. Quality is good but nothing extraordinary. We encountered several instances of rolling shutter on the lake, which was not a good sign. Again, that was a tough test and more static videos such as panning the shore were far better. A tripod or monopod should be part of your kit when using this PowerShot.

The camera’s native ISO in Program Auto Exposure is 100-3,200 but switches automatically to 6,400 when using the Low Light scene setting. In the ISO Auto mode the range is 100-1,600. Given the small chip, we weren’t expecting fantastic results and our tests proved it. Noise and detail were under control to ISO 640/800 then declined as we ramped up using the jog wheel. You could get away with using the highest levels if you don’t mind smaller photos but we wouldn’t suggest it. Definitely keep your sensitivities low; it’s just reality given the imaging device and lens apertures of f/3.4 (wide) and f/6.5 (tele). It goes without saying this camera should be used in daylight or with the flash while indoors.

The SX60 is a quality mega-zoom for general use, but it stumbles when it comes to action shots or in low-light situations, especially at full telephoto. Despite the lows, it is still a highly recommend camera for those who want a one-in-all that’s perfect for travel. That 21-1,365mm 65x zoom is really hard to beat, and it beats carrying around a sack-full of lenses any day.

Topics
Mavic 3 design change reduces the drone’s price
Best GoPro alternative action camera deals for October 2022
Apple responds to troubling iPhone 14 Pro camera issue
The DJI Osmo Action 3 looks nothing like the Action 2
How to remove the background from an image
Instagram boss says to expect even more video content
6 awesome Earth images captured from the ISS in July
This GoPro Hero 10 bundle is $100 off at Best Buy today
The best iPhone tripods for 2022
Watch this Mavic 3 drone soar above the world’s highest mountain
How to watch DJI unveil an all-new drone today
DJI Avata vs. DJI FPV: Which first-person drone is best for you?
Astronaut reveals source of ‘intriguing’ bright light on Earth