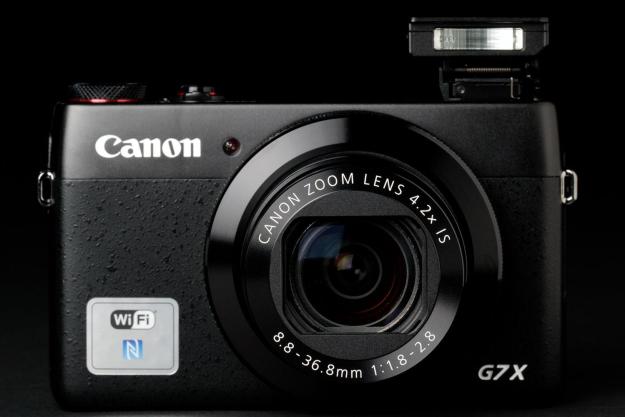 “Canon’s response to Sony’s RX100-series is the PowerShot G7 X, and this pocket rocket is one impressive challenger.”

Canon recently added another PowerShot pocket camera to its lineup that’s clearly targeted to enthusiasts – given its features and hefty price. As sales of basic point-and-shoots continue to off, expect to see camera makers beef up their more advanced models, like the PowerShot G7 X. Although very compact, on paper it looks a winner, but let’s see how it performs in the real world.

At first glance, the PowerShot G7 X ($700) has a style and form factor that’s similar to the popular Canon S-series, such as the lower-priced S120 and S110, but look closer and you’ll see touches of the classic G-series – like dedicated dials – and hints of red that are reminiscent of the company’s professional Cinema EOS products.

The PowerShot G7 X is without a doubt one of the best pocket cameras Canon has ever released.

The G7 X lens has a built-in cover and is surrounding by a customizable clicking ring that lets you quickly make adjustments for one of eight choices (white balance, manual focus, exposure compensation, etc.); the default is ISO. The ring is definitely noisy, letting you know it’s working but we liked the sound of it, in a retro sort of way.

Next to the shutter button/zoom lever are double-decker dials. The top level is a classic mode dial with 11 options, while the lower is for adjusting exposure compensation. There is no hot shoe for optional accessories such as a larger flash or electronic viewfinder, however. Rounding out the top-deck features are a pop-out flash, stereo microphone, and speaker.

Canon, like almost all camera manufacturers, has embraced selfies with abandon. With this PowerShot, the tilting 3-inch LCD flips to a full 180 degrees, even when the flash is popped out. The display is rated 1.04 million dots, and the touchscreen is responsive for tapping and swiping through various functions. The hinge is really solid, adding to the overall heft of the camera. We noticed some reflectivity issues when the sun is behind you, however, but generally it holds up to bright sunshine. Near the display is the usual assortment of buttons; hit the Function button and you’ll delve into Canon’s very logical and tried-and-true interface for changing parameters.

On the right side are USB and HDMI connections, and a Mobile Device button to connect with a Wi-Fi network or . There’s also an tag to use near-field communication to pair with a compatible mobile device (as of now, they are mainly Android devices). The G7 X is compatible with Canon’s CameraWindow app for iOS and , which you can use to review images and operate the camera remotely. The battery is rated only 210 shots, which isn’t superb; an Eco mode provides 310 shots, but it shuts down the camera too quickly to save power.

The G7 X comes with a battery, plug-in charger, and wrist strap. There’s also a quick-start guide. Canon no longer provides software or documentation on a disc; you will need to download them from Canon’s support site (after entering your camera’s serial number). The lack of a USB cable was surprising. We’re sure most people have spare Mini USB cables lying around, and many people prefer using a memory card reader to download files, but for a camera that costs $700, is throwing in a cable that much to ask?

The G7 X’s 1-inch 20.2MP sensor captures 5,472 x 3,648-pixel files (JPEG/RAW). It also takes 1080/60p videos, which we’re happy to see since Canon compact cameras have lagged behind the competition on the movie front. The G7 X uses the peppy DIGIC 6 image processor to move things along nicely – the top burst setting is 6.5 frames per second, and unlike many pocket cameras you can easily shoot continuously for 20 or 30 full-res JPEGs. It slows down if you’re shooting RAW+JPEG, but over this spec is quite impressive.

It has been awhile since we handled a quality PowerShot, and the G7 X brings back that Canon photo “feel” we like so much. In our sample shots, colors have the accuracy we’ve always enjoyed over the years. The overall impression was quite pleasing, and we doubt anyone but the fussiest pixel-peepers would take issue with the photos.

Thanks to that large sensor, the shots we took of Halloween trick-or-treaters, desert and ocean landscapes, and other subjects – with a few selfies thrown in for good measure – were really good. The camera responded quickly and the autofocus worked well for the most part, although there were a few occasions when it couldn’t immediately lock onto the subject.

Canon’s user interface has been around for a while now, but it’s simple to operate. Between the touchscreen and jog wheel, you’ll master this one very quickly (unlike the UI on the new Nikon 1 J4 and S2).

The G7 X records 1080/60p videos with stereo sound, using the MOV format. We shot a variety of clips and enjoyed what we saw on the big screen. Focus and exposure were good for the most part, but a nighttime Halloween video of banjo-playing skeletons didn’t pan out, due to low light. Even high ISOs and wide aperture lenses can’t do everything. With a bit more light, the camera did a fine job and in bright daylight, there were no issues at all.

This pocket camera handles ISOs very well and it has a range of 125-12,800. In our tests images were solid to ISO 800-1,000, then gradually deteriorated. Even the 6,400 setting was decent albeit at a small image size, but ISO 2,500 and 3,200 are the highest settings you should go. Still, it means you can crank up the ISO to get a faster shutter speed, especially when combined with the wide aperture lens. We predicted the camera would fall flat at ISO 12,800 (we were right, those images weren’t usable), since it takes a high-end DSLR to perform at those levels and beyond. But, overall, Canon is to be commended on the sensitivity front.

Canon was a little late dealing with issues of wireless connectivity but the G7 X is a solid performer. The Canon CameraWorks app (iOS and ) is not the most advanced when you put it beside Samsung or Sony’s, but it handles the basic needs including transferring images between the camera and or tablet, and remote control. There were no issues pairing with a Samsung Galaxy S5, and we’ve had no problems using CameraWorks with iOS in the past. We are happy we no longer have to chastise Canon for being slow on its Wi-Fi implementation.

The PowerShot G7 X is without a doubt one of the best pocket cameras Canon has ever released. Good pictures, nice movies, a bright lens, and loads of adjustments make it an easy Editors’ Choice recommendation. It’s not perfect but it’s simply a great walking-around camera.

Is it better than the Sony RX100 Mark II or the Mark III – two cameras we have deemed the best pocket shooters out there? That’s a very subjective question since it boils down to what type of images you prefer. Canon’s image quality is accurate and realistic, whereas Sony tends to have a bit more vibrancy and pop –which we like, but you may not. Regardless, you can’t go wrong either way. We wish the G7 X (and the Sony models) weren’t so expensive, but Canon has indeed created a wonderful pocket rocket.

Topics
Mavic 3 design change reduces the drone’s price
Best GoPro alternative action camera deals for October 2022
Apple responds to troubling iPhone 14 Pro camera issue
The DJI Osmo Action 3 looks nothing like the Action 2
How to remove the background from an image
Instagram boss says to expect even more video content
6 awesome Earth images captured from the ISS in July
This GoPro Hero 10 bundle is $100 off at Best Buy today
The best iPhone tripods for 2022
Watch this Mavic 3 drone soar above the world’s highest mountain
How to watch DJI unveil an all-new drone today
DJI Avata vs. DJI FPV: Which first-person drone is best for you?
Astronaut reveals source of ‘intriguing’ bright light on Earth