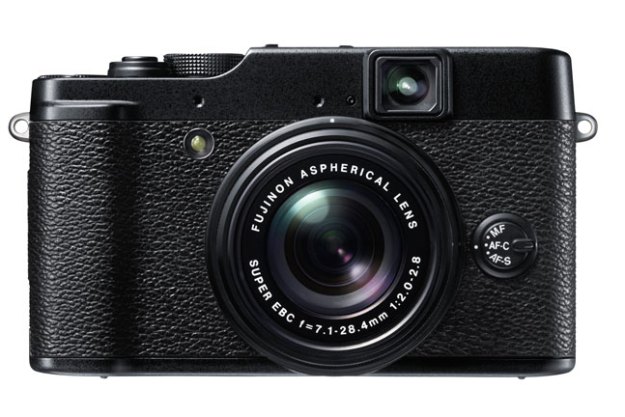 “The X10 defies category, so it doesn’t seem fair to lump it in with prosumer point-and-shoots. Whatever it is, this camera will easily become your go-to fixed-lens option...”

Once again, Fujifilm has brought us back to the analog days with its retro-looking X-series. The new X10 is a less full-featured version of the X100 (which while impressive, bordered on overwhelming). The new iteration is far more consumer-friendly — both in terms of price and handling. Of course, that means it’s also a step backward, with some downgraded specs. But with the similar superior image quality and extensive focus on manual shooting, the X10 finds a better balance than its predecessor.

Like the Fujifilm Finepix X100, the X10 doesn’t disappoint when it comes to style and design. It has the vintage look of its predecessor without quite as much bulk, making it a far friendlier fit in your hands. Still, this is by no means you’re average point-and-shoot (which should be obvious from the get-go): Its magnesium alloy and aluminum body make it much heavier than pretty much anything in this category. That said, we found the X10 much easier to carry and cart around than the X100.

This means the backside of the X10 is somewhat more crowded than the X100, but that’s a sacrifice we’re more than willing to make, and isn’t noticeable until compared side by side. While part of that is the camera’s smaller size, it’s also in thanks to an added thumb grip on the back panel.

The dial and button system are set up similar to the X100. You have your display and dedicated RAW controls on the back, as well as your standard control mode dial to navigate in-camera settings. Two features showcase the major deviations between the two cameras: The X10 does not include the X100’s groundbreaking hybrid viewfinder and but does have a manual pop-up flash, which the first generation camera did not.

The rest of the controls are to be expected: shutter, mode dial, function button, exposure dial, and hot shoe. Nearly every button and control is on the back of the camera, leaving the front to be its eye-catching self.

One mind-boggling feature we originally hated and then found really fun is the power switch. The camera powers on and off via the lens, which powers on when you turn it one stop past the 28mm mark.

But back to the pure aesthetics of the X10. You’ll be hard-pressed to find more beautiful cameras than Fujifilm’s X-series, and personally we like the X10’s black-on-black body better than the X100.

One feature that may have propelled the X10 into all new territory for the series would have been a 3-inch display. That size has become the new standard for digital cameras, but the X10 opts for a 2.8-inch display. There are brighter, bigger LCD displays on the market, but it’s relatively unnoticeable until you break out a competitor camera to compare.

Fujifilm doesn’t go out of its way to pack the X10 with fun editing or filter features. There’s a panorama setting, red-eye removal, and some tone editors, but the camera isn’t about novelties and we’re glad there aren’t a bevy of Instagram-like options built-in.

In addition to the camera, you get the lithium-ion battery, its charger, the shoulder strap, lens cap, USB cable, CD-ROM, and owner’s manual.

The X-series from Fujifilm are fickle beasts. If you can tame them, work with them and not against them, you will take home stunning images. And these two devices arguably produce the best point-and-shoot photography (and this isn’t just when pitting them against pocket cams, but higher end cameras as well). However you simply cannot pick up the X10, start shooting, and expect to get everything you can out of the camera.

The in-camera UI leaves a lot to be desired. It’s overly technical and makes few attempts to help users through the process. Advanced photographers will take to this quickly, as some initial trial and error will point you in the right direction. But those who have just advanced beyond prosumer point-and-shoots and have mastered those simpler manual controls will struggle at first.

However once you surmount this hurdle (and you will, it just might be more frustrating than some users were mentally prepared for), you’re in for a treat. The X10 really is a scaled down version of the X100, but it keeps high-quality specs where it counts. In lieu of the X100’s 12.3-megapixel APS-CMOS sensor, it has a 12-megapixel EXR-CMOS sensor. This is what you can thank for the X10’s performance in low light, although indoor shots without flash were pretty dependent on overhead light.

It also deserves to be mentioned that the X10’s processor works differently than in other cameras. Basically, it can intelligently change the sensor settings at different ISOs to give you incredibly vibrant images. Using the EXR mode on the camera puts this mechanism to use and we were incredibly pleased with the results. It sort of renders the Auto mode obsolete.

The fun feature we talked about earlier, powering the camera on and off via the lens, can be something of a drawback when you’re trying to shoot on the go. Twist too far and you’ll find you’re at max zoom, and it will take an extra moment to get into the desired range. While we’re on the subject, novices might find themselves looking for a zoom toggle, but complete control over a manual zoom is a great feature that propels shooters into a new level of skill.

The X10 improves on some of the AF lag we experience with the X100, although we wouldn’t call this a fast camera. It’s responsive and recycles quickly enough, but it’s not going to win any races in this department. The AF issues were generally only in poor lighting or during video recording, but otherwise the camera performed quickly thanks to its dual processors. Shutter lag was minimal and really only noticeable when we shot RAW images.

Images from the X10 were crisp and well-saturated. With many point-and-shoots, even with extensive manual controls, you sacrifice natural hues. They tend to be warmer and more contrasted than when using micro-four-thirds and DSLR devices. But the X10 is an exception, and we found colors to be spot on, and could push ISO sensitivity up to 1600 with little to no noise. Beyond that you’ll want to keep prints small, but the camera still performed well.

Video capture on the X10 was easy via the dedicated button, and you can zoom during recording. The X10 shoots Full 1080p HD at 30fps and you can capture stills while shooting. Zooming in and out quickly will mean the camera needs to take a second to adjust focus; generally this was acceptable, but in some cases the camera didn’t quite catch up in time. But we’re happy to sacrifice focusing for silence: There was no obnoxious, audible gear grinding from zooming and focusing during video capture.

Battery life was fine but not great, and you should be able to get around 270 shots on a full charge. If you turn the LCD off, you can seriously push this, but only incredibly confident photographers will find themselves satisfied without playback.

The X10 defies category, so it doesn’t seem fair to lump it in with prosumer point-and-shoots. Whatever it is, this camera will easily become your go-to fixed-lens option, and many DSLR users will find themselves swayed by its smaller size and impressive results.

In addition to its good looks and stunning images, what Fujifilm really got right with the X10 is its pricing. At $599, it’s not that much more than many higher-end, manual point-and-shoots from competitors (the Canon PowerShot S100 is $429). And you’re getting so much more: the hot-shoe, build quality, and manual lens really push its value. If you’re considering a high-end point-and-shoot, the X10 might seem like an unconventional and outside-the-box choice, but we’d encourage consumers to step outside the pocket cam comfort zone in this case.