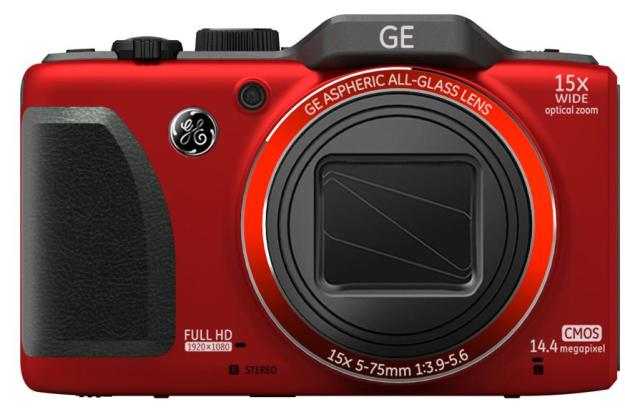 “The G100 is for someone who simply wants a camera that does what it’s told and nothing more.”

The GE G100 is a strange breed: It’s a point-and-shoot in a compact system’s clothing. With its pop-up flash, front grip, and bevy of buttons, you might think there’s more functionality here than there actually is. In truth, this is an incredibly simple unit that does what it’s told — thanks to a very simple user interface and navigation system — and little more. But for about $150, you can’t really ask for too much, now can you?

The G100 puts up a good show, aesthetically. The front of the chassis has a subtle grip and a fairly easy-to-ignore GE logo. The back plate features a 3-inch LCD display and the usual set of buttons for in-camera navigation. A central dial and set button will help you do most of the work here, and there’s also an intelligent control for changing light modes as well as a dedicated video button.

The mode dial sits on top of the camera — which is the source of some frustration. For starters, the mode dial is small, yet juts out too far from the camera’s body. Likewise, the power button is so tiny you could totally miss it, yet also easy to turn on accidentally in a bag or pocket. The zoom toggle and shutter button function fine, although the burst mode and exposure-dedicated controls are also quite small and blend too easily into the rest of the background.

On the far side, you have a pop-up flash, which is actually surprisingly nice.

Like we said, when it comes to appearance, the G100 is doing a lot of things right: Familiar button design and setup, a big display, and a professional-looking faceplate.

Unfortunately, build quality doesn’t measure up. Most of the camera feels toy-like and seems easily broken. During testing, the lens cover would sometimes stick, requiring us to manually peel it back for full exposure. When fully zoomed, the lens barrel felt loose and a little rickety. The shutter button fails to have a satisfying click. And we’re not going to be able to get over just how small that power button is.

The UI and navigation are simple as could be, although that’s mostly because there isn’t much to navigate. The camera gives the impression that there are more capabilities than there actually are — but for what you will use the G100 to do, you can get in and out easily. Hitting the set and function/menu buttons let you work your way through the available settings in a cannot-miss-it banner across the center of your screen.

Up top, a simple turn of the mode dial changes your settings — and that’s about all there is to it. There is no digging through customization setup, no getting lost trying to find your ISO settings. That’s because those functions aren’t there. There’s something to be said for simplicity, and there are plenty of buyers out there who have no interest in manual shooting; but there are some weaknesses in its performance.

We should probably note two things before going any further: One: This camera only costs about $165 to $140 in stores. That’s extremely inexpensive for a digital camera. Two: It might look like a powerful, manual compact system — but it’s not. That’s not to say it’s bad; it’s just a fairly simple point-and-shoot, which the design might cause you to forget.

But for an inexpensive, simple point-and-shoot, the G100 has a few noteworthy features. There’s a face beautifying mode for better portraits, sweep panorama, HDR, a 15x optical zoom, high-speed burst mode shooting, a multi-exposure mode, and some other pre-set scene options. This is a pretty decent array for the price.

Unfortunately, the performance suffers. The lack of manual control means that there will be plenty of blown-out pictures and unnatural saturations in your photos. Blacks could be blacker, whites could be whiter, and so on.

The camera also isn’t breaking any speed barriers. Focusing and shutter lag were noticeable, although refresh time wasn’t too bad.

The best way to use the G100 is to use what few features it does. Video capture, panorama, and multi-exposure shooting standing out among the pack. We could see a beginner or a kid who’s looking for a first camera getting a lot of use out of these specialized modes. High-speed shots and macro shooting were also adequate. Video deserves a mention as well: Shooting full 1080p HD, we were fairly impressed with how well the G100 worked as a camcorder.

However, you can’t really get beyond the sub-par image quality. The G100 has a 14-megapixel CMOS sensor, but its processing power and the lens quality simply aren’t there. Low-lighting shooting produced was lots of blur, and photos never quite turned out as crisp as you’d imagined. For a point-and-shoot, there just wasn’t much reliability.

It’s hard to knock the GE G100 too much because it retails for about $165 — that’s pennies in digital camera terms. You can’t expect a manual compact system at that price, but the G100 insinuates itself into that category with its looks. The bigger size (this won’t be fitting in any pockets) and the pop-up flash clearly make it look like it’s trying to do more than it can.

All that said, the G100 has some impressive and fun features that a photo novice will enjoy using, and video did surprisingly well.

It’s about trade-offs here. If you want something simple and cheap, the G100 is a viable option. But if you also want something small — well, it’s not. As you can imagine, that makes it a bit of a hard sell unless you’re on a very tight budget.

The G100 is for someone who simply wants a camera that does what it’s told and nothing more. Kids will also like the bonus features like panorama and multi-exposure.