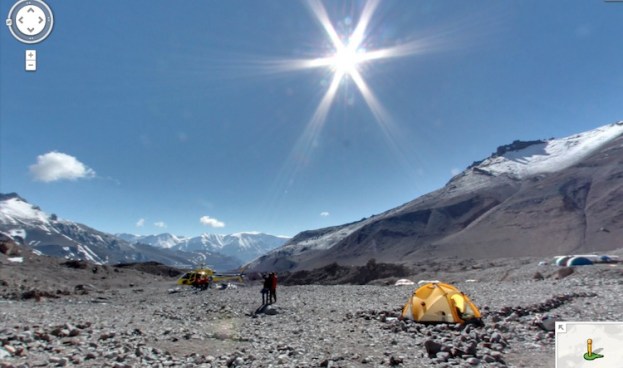 Google has quite literally reached new heights with its Street View service, gathering imagery from some of the world’s highest mountains.

In fact, the panorama captured at the summit of the 22,800-foot (6,962 meters) mountain in Argentina is now the highest point for which Street View imagery is available. However, sadly for the Google expedition team, the peak appears to have been enveloped in clouds when they arrived there, dashing hopes of being able to treat Street View users to more spectacular scenery.

Instead, Google adventurer Dan Fredinburg suggests you check out photos taken of Tanzania’s Mount Kilimanjaro, the dormant volcano known as the Roof of Africa. “See amazing views of the highest freestanding mountain in the world covered in snow just three degrees south of the equator,” Fredinburg wrote in a Google blog post.

To capture the 360-degree panoramas, the Street View understandably left its camera-laden cars in the Mountain View garage, opting instead to use “a simple lightweight tripod and digital camera with a fisheye lens”, with the photographs stitched together later.

Announcing the new data in a post on Google’s Lat-Long blog, expedition team member Sara Pelosi said she felt “honored to share this amazing imagery….and show the world what life is like from its highest peaks.”

Google has taken its Street View project off-road more and more in recent years as it endeavors to capture imagery for places most of us will never have a chance to visit. Armchair travelers can now enjoy virtual vacations to Antarctica, the Amazon River and Australia’s Great Barrier Reef, among many other locations.

Topics
Adobe’s Lightroom just got a whole lot more useful
The best 360-degree camera apps for iOS and Android
Snapchat’s pocket-sized Pixy drone takes to the skies
ReelSteady makes GoPro Player ‘reel’ useful for filmmakers
How to remove the background from an image
Instagram boss says to expect even more video content
6 awesome Earth images captured from the ISS in July
This GoPro Hero 10 bundle is $100 off at Best Buy today
The best iPhone tripods for 2022
Watch this Mavic 3 drone soar above the world’s highest mountain
How to watch DJI unveil an all-new drone today
DJI Avata vs. DJI FPV: Which first-person drone is best for you?
Astronaut reveals source of ‘intriguing’ bright light on Earth