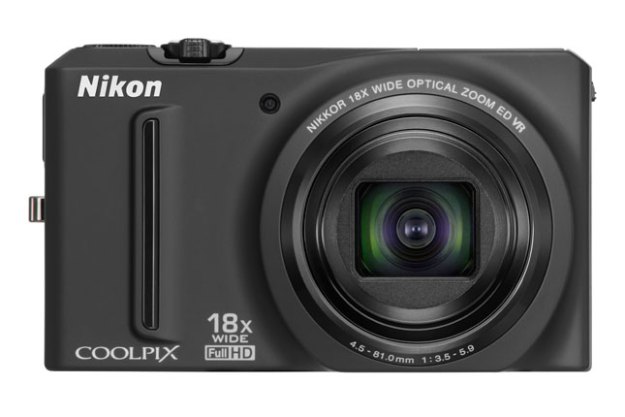 “The Nikon S9100 is definitely worth putting in your pocket on your next trip, as its pluses definitely outweigh the minuses. Just don’t expect perfection.”

Travel time is here. Everyone’s looking for a good compact camera with a potent zoom, solid image quality and the ability to record full HD videos to capture all those great memories. On paper the Nikon Coolpix S9100 seems to be a solid contender, with an 18x optical zoom, 12-megapixel sensor, and relatively compact body. While so-so image stabilization makes the zoom less useful at its furthest levels without something to brace it against, solid image quality and a cornucopia of other features still make the S9100 worthy of consideration.

The Nikon Coolpix S9100 is one deceptive camera. This 1.4-inch-thick digm,icam has an 18x optical zoom, one of the most potent lenses you’ll find in a non-DSLR-type body. With a solid look and feel, the S9100 is still compact enough to fit in your pocket, so you can take it with you on your travels. Available in black, silver or red (our sample was black), it has an almost suede-like texture with a soft, reassuring feel. It’s good old plastic, but it’s nice anyway. The relatively hefty camera tips the scales at 7.6 ounces with battery and card, measuring 4.2 x 2.5 x 1.4 (W x H x D, in inches).

There are very few direct competitors for the S9100. Most other digicams with powerful zooms (12x plus) are shaped like DSLRs, and are much bulkier. Somewhat similar in shape to the Nikon are the Canon PowerShot SX230 HS ($349, 14x, 12-megapixel CMOS) and Panasonic’s $299 Lumix DMC-ZS8 with a 14-megapixel CCD and 16x lens. They’re not exactly the same, but there are some alternatives as you start your search.

The front of this new Coolpix has a bar on the left that acts as a grip, and raised bumps on the rear thumb rest help keep the camera steady and in position. You’ll see an inordinate amount of text and logos on the front, but the key feature is the extending 18x optical zoom with a range of 25mm to 450mm (it pops out about 3 inches at extreme telephoto). The camera has the kind of wide angle we like, adding a nice perspective distortion to your shots. Zoom in and you’ll find subjects you can hardly see — very nice. Also on the front is the autofocus assist lamp. The flash — which is usually here — is a manual type that pops up on the top right via a switch (if you’re looking front on).

On the top is the flash, stereo pinhole mics, a three pinhole speaker, power button and shutter surrounded by a zoom toggle. The mode dial on the far right has typical settings as well as a few that are a direct result of the back-side illuminated (BSI) CMOS sensor. Along with Auto, there’s Smart Scene Auto, which is like Intelligent Auto and Smart Auto found on other point-and-shoots. This one adjusts for seven scene types like the Panasonic FH27, but newer Canons recognize 32. The Scene setting offers 15 choices ranging from portrait to pets. Thanks to the CMOS chip, the S9100 takes 9.5 frames per second in the continuous mode. Before you start saying this digicam will replace a $500 DSLR, realize this speed only lasts for 5 frames, and then the camera takes a breather. Still, this is a very good burst for a 12-megapixel point-and-shoot. As for the other options offered by a DSLR (such as adjusting apertures and shutter speeds), you won’t find them here, so if that’s important, look elsewhere. The Night Landscape, Night Portrait and Backlight (in HDR mode) options are also courtesy of the CMOS imager. All three take multiple frames and combine them to cut down on noise and enhance dynamic range. We’ll get into them in the performance section. The final setting on the mode dial is effects, which lets you add sepia tones and other colors to your images.

Naturally the rear is dominated by the 3-inch LCD, rated a scintillating 921K pixels. It worked well, even with the strong Florida sun directly over our shoulder. You’ll see a red dot button on the top right that lets you quickly take videos if the spirit moves you. The S9100 captures full HD 1920 x 1080 at 30 frames per second with stereo sound, and the ability to zoom as you shoot. You really should expect nothing less if you’re shopping for a quality camera in 2011.

The S9100 has a classic four-way controller Nikon dubs a “rotary multi selector.” Spin the dial and you easily move through the very straightforward menu system. At the four points you have access to macro (as close as 1.6 inches), self-timer, flash and exposure compensation. Here you can also adjust hue and vividness. The flash has fill-flash and slow-sync settings, beyond the usual red-eye reduction which is available as well. Toss in playback, menu and delete buttons and we’re done.

On the right side is a compartment for the mini HDMI out and strap eyelet, while right has the flash pop-up switch. The bottom of the made-in-Indonesia digicam has a metal tripod mount and compartments for USB-A/V out, battery, and memory card. The S9100 accepts only SD media including SDXC — 4GB with a Class 6 or better rating will do the trick.

The Coolpix S9100 comes with a wrist strap and rechargeable battery rated 270 shots per CIPA, a very good spec. Nikon does not supply a plug-in charger, so you use the supplied USB AC adaptor to power-up. In other words, your camera is out of action while the battery charges. If you get into the habit of plugging it when you get home, just like your cellphone, you’ll be alright. If not—tough luck. We know companies are trying to shave pennies where they can — Sony among them — but this is foolish. Along with USB and A/V cables there’s a CD-ROM with ViewNX 2 software for basic editing and image handling. Another disk has the full 236-page manual as a PDF, plus you get a printed 24-page Quick Start Guide.

The S9100 has a 1/2.3-inch, 12.1-megapixel BSI sensor, so we set the maximum resolution of 4000 x 3000 and used full HD for video. As always, we began shooting in auto, spinning the mode dial for other settings, capturing videos when an appropriate scene presented itself. Along with our traditional subjects near home, we took the camera, along with several others, to Florida’s east coast to see how it handled surfers, palm trees and blinding sunshine. Back home, 8.5 x 11 full-bleed prints were made without any post processing, files closely examined on a monitor, and videos experienced on a 50-inch plasma via HDMI.

Before getting into the results, we’ll state the S9100 is a good travel companion. It’s very easy toting around, powers up quickly and grabs focus with little hesitation thanks to a nine-point AF system. Menus are nothing special, but you’ll navigate them with a minimum of fuss. The 3-inch LCD was really impressive, as it handled direct sunlight very well, something we can’t say about the new Sony TX100V, which we’ll be reviewing shortly.

The killer attraction of this camera is its 18x zoom lens. Think about it for a second: You have a range of 25mm to 450mm in your hands. We prefer wide-angle vistas, which this digicam delivers, but if for some reason you really want to zero in on something super far away, you can do that too. We were on the pier at Deerfield Beach checking out the surfers, shooting wide expanses of ocean then grabbing surfers on their boards. Here one of the camera’s limitations rears its ugly head. Unlike many competing models that use optical image stabilization (OIS), the S9100 uses a combination of image sensor shift and electronic vibration reduction to help eliminate blurry photos. Olympus and Pentax use image sensor shift systems, so this is not unusual. Unfortunately, our results were not the best, not tack sharp. The Nikon P100 mega-zoom handles shots much better, since it has OIS. We know it costs more to implement, but the S9100 could really benefit from Nikon’s 5-way VR anti-blur system. Not to say all the shots were a bust, but if you’re offering 450mm, come on, guys, make it more useful, even if you have to charge a little more. Bracing the camera on something solid will improve your results.

We’ve used a number of 12-megapixel BSI CMOS cameras this season and you’ll love the lack of noise in dim light these chips deliver. For our traditional test subject, there was minimal noise at ISO 400, while at 800 color fidelity started to fade. It slips further as you hit 1600 and 3200. Even so, you can still get away with a small print at 3200, something we could never say until better CMOS sensors came along. Remember: There’s a reason not to be seduced by megapixel count. Lower numbers, such as the 12 megapixels found here, offer much higher quality than most 14- and 16-megapixel CCDs.

The BSI CMOS chip also lets the camera perform a number of nice tricks, such as that high-speed burst at nine frames per second for five shots. This did a fine job for surfers hopping on their boards and riding the not-too-raging water. Also of note is Backlight HDR, one of our favorite features. If you’re shooting a subject with severe backlight issues, the camera quickly takes 3 shots and combines them, improving the overall exposure. This is a real winner. The chip also merges multiple frames in Night Landscape and Night Portrait. You’ll like these results as well.

We were looking forward to shooting the Nikon’s H.264 MPEG-4 AVC 1920 x 1080 videos at 30 fps (MOV files), especially after the disappointing 24 fps 720p clips of the Panasonic DMC-FH27. Overall the results were quite good, although there were occasional focusing issues when zoomed to extreme telephoto and — as usual — the stereo mic made the admittedly stiff Florida breezes sound like F5 tornadoes. For the most part, you’ll be pleased with what you see on screen.

On paper, the Nikon Coolpix S9100 has a lot going for it: 12-megapixel BSI CMOS imager, wide-angle 18x zoom and full HD video. Yet these theoretical terms did not translate to the greatest photos and videos in the real world. Heavily-zoomed images just weren’t super sharp, and this is probably due to this camera’s stabilization system. We really liked the 5-way VR in Nikon’s P100 using OIS, and it should be used here. We recently shot a Canon PowerShot ELPH 500 HS also with a 12-megapixel CMOS chip, OIS, but a decidedly less powerful 5x zoom. Those images were as sharp as can be, and we rated them highly. We also reviewed the Sony WX9 with its AVCHD videos, and they were far superior to the Nikon’s clips. Those caveats on the table, the S9100 is definitely worth putting in your pocket on your next trip, as its pluses definitely outweigh the minuses. Just don’t expect perfection.