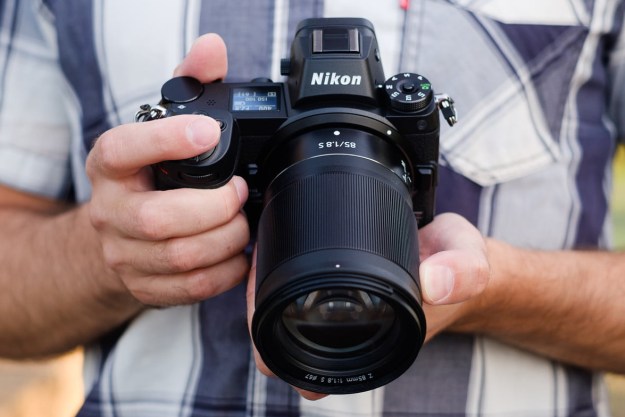 “Is f/1.8 good enough for a premium portrait lens? In this case, absolutely.”

With the exception of the upcoming 58mm f/0.95 Noct, Nikon has taken a conservative approach with its Z-series lenses, as the new Nikkor Z 85mm f/1.8 S demonstrates. While this isn’t as exciting as rival Canon’s approach of churning out bright f/1.2 primes that cost thousands of dollars, it might be a smarter move. An 85mm f/1.8 doesn’t sound impressive on paper, but this is exactly the type of lens that makes sense for the smaller profile of a mirrorless camera. It is compact, lightweight, and economical. It also happens to be really sharp.

The Z 85mm f/1.8 S takes design cues from Nikon’s other S lenses, with a lightly textured exterior surface and large focus ring that can be reprogrammed to control other settings. It is very minimalist in appearance, with no focus distance scale and just a single switch that sets the focus mode. Mounted to a Z 6, it is comfortable to hold and perfectly balanced.

Yes, it’s “just” f/1.8, but I’m not sure why there is so much fuss over ultrafast lenses these days. An f/1.8 aperture is good enough to achieve a very shallow depth of field on a full-frame camera, and given the impressive high-ISO performance of modern sensors, you don’t really need more light-gathering ability.

By opting for f/1.8 over f/1.4 — let alone f/1.2 — Nikon was able to keep the 85mm S lens considerably more compact. It’s just under 4 inches long, 3 inches in diameter, and weighs a hair over a pound. A bit surprisingly, this is actually larger than the F-mount AF-S 85mm f/1.8, a lens designed for DSLRs. There are good reasons for this, however.

Where the F-mount 85mm f/1.8 was always meant as a budget alternative to the professional-level f/1.4 version, that’s not the case with the Z-mount 85mm. It uses a more complex optical design with 12 elements in nine groups, a nine-bladed aperture diaphragm, and two stepper motors powering the focus system. As with the Z camera bodies, it is also dust- and moisture-resistant for use in all weather conditions.

Make no mistake, this is meant to be a premium lens, and for the most part, it definitely performs like one.

I have to admit, I am a little shocked by how good the 85mm f/1.8 S is. Usually, you can tell a portrait lens is going to be good just by looking at it — the Sigma 105mm f/1.4 Art, for example, has a huge front element that practically screams how awesome it is — but the Z 85mm is far more modest. It doesn’t really look that impressive, but the results are stunning. Even wide open, I noticed no chromatic aberration in real-world testing, even in details just beyond the depth of field, where it is usually most noticeable. Eyelashes and individual strands of hair are tack sharp, or fade naturally into oblivion as the focus falls off, without any distracting colored fringing.

The lens does sharpen up a bit more by f/4, but the difference isn’t huge, and I only noticed this in objective test shots, not real-world use. In short, you should have free rein to choose whatever aperture you need for the desired depth of field without having to worry about softness.

That’s not to say you’ll always get perfect focus at f/1.8, however. I noticed that Nikon’s Eye AF in the Z 6 often focused on my subject’s eyelid rather than the eye itself. This wasn’t always the case, but it did pose an occasional problem for close-up portraits, where the depth of field was shallow enough that eyelashes could be in focus, but the iris would be a bit soft.

In general, autofocus speed was usually very good. However, if you’ve enabled “Apply settings to live view,” which reflects your exposure settings in the brightness of the preview image, and you purposefully underexpose a scene either by stopping down the aperture or increasing the shutter speed, the lens will start hunting for focus much more. By turning “Apply settings to live view” off, I noticed AF performance was far more consistent and the lens rarely hunted, even with the aperture stopped down.

To be sure, this is more likely a problem with the camera system as a whole, not just the lens, but it’s an issue to be aware of nonetheless.

But what everybody undoubtedly wants to know about is the bokeh. First of all, yes, f/1.8 is plenty wide enough to get ample amounts of blur in your photos, and the Z 85mm’s bokeh is really beautiful. Blur circles form solid disks that combine and overlap in a pleasing way, without any distracting “onion rings.” Up to f/2.8, the blur circles are nearly perfectly round, but you can start to see an angular aperture shape at smaller f-stops. This is not necessarily bad — it’s a matter of opinion, you either like the look or you don’t — but is perhaps a bit surprising given the nine rounded aperture blades

At any rate, a lens like this is designed to be shot at or near wide-open, and the Z 85mm really shines here. In addition to the shallow depth of field, it has a very soft vignette that evenly fades in, gently drawing your attention toward the center of the frame without causing the corners to be distractingly dark. It may not quite match the look of something like the Sigma 105mm f/1.4 on a DSLR, but it is so much easier to use (not to mention, cheaper) that you may actually get better results and more keepers.

As the first true portrait lens for Nikon’s year-old Z series, the Z 85mm f/1.8 S is a winner. The combination of a bright aperture, sharp optics, and compact design make it a perfect match for the Z 6 or Z 7 camera bodies. It delivers a shallow depth of field without breaking the bank — or your back. There are very few situations where I feel like I’d need or even want a faster lens on a full-frame camera.

That’s not to say Nikon won’t make wider-aperture portrait lenses in the future. Indeed, the company has continually touted the Z mount’s larger diameter for enabling wider apertures than what’s possible on the F mount. Despite the promise of f/0.95 glass, however, I am very pleased that Nikon has taken a more conservative approach to this first round of Z lenses. An 85mm f/1.8 just makes sense, and there is very little not to like here.

It may have taken Nikon a long time to get its mirrorless efforts dialed in, but it’s finally doing it right with an affordable, user-friendly approach to lens design that doesn’t sacrifice optical performance. Other manufacturers should take note.

Not currently. If you’re a Nikon Z-series photographer and you want a good portrait lens, this is just about the only option short of adapting an F-mount lens.

This lens feels very well made and looks like it will hold up to professional wear and tear for many years. Lenses tend to have long product life cycles, so don’t expect a replacement anytime soon.

Topics
The Nikon Z 7 II and Z 6 II are coming October 14: Here’s what we want to see
Nikon’s latest optics offer features unique to the Z lens line
Fujifilm’s new nifty 50 f/1 lens can autofocus in near darkness
Smaller and cheaper, the full-frame Lumix S5 is exactly what Panasonic needed
How to remove the background from an image
Instagram boss says to expect even more video content
6 awesome Earth images captured from the ISS in July
This GoPro Hero 10 bundle is $100 off at Best Buy today
The best iPhone tripods for 2022
Watch this Mavic 3 drone soar above the world’s highest mountain
How to watch DJI unveil an all-new drone today
DJI Avata vs. DJI FPV: Which first-person drone is best for you?
Astronaut reveals source of ‘intriguing’ bright light on Earth