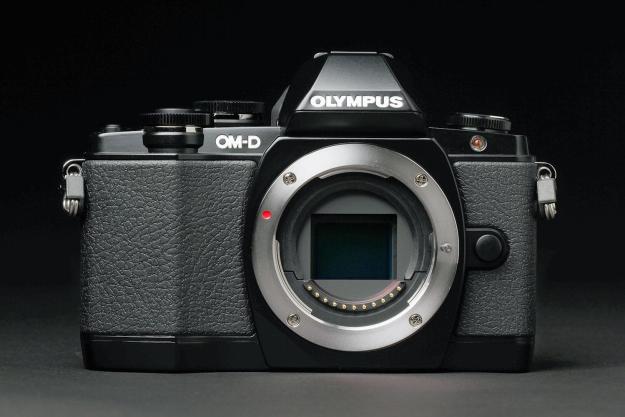 “The E-M10 isn’t better than cameras that have larger APS-C sensors and cost less, but for Olympus Micro Four Thirds fans, they will be pleased with the fine photographs.”

The $1,399 body-only OM-D E-M1 is a major hit for Olympus, as it tries to remain a force in the mirrorless camera market against Sony, Samsung, Fujifilm, et al. To keep the party going, the company just introduced a stripped down, much lower-priced version, the E-M10, for a whopping 700 bucks less. But how much did Olympus have to pare down in order to get to that price? Or, perhaps, maybe Olympus has given us a little wonder of a camera that’s worthy of the flagship OM-D name. Read on to see just how good it is, and what features it lacks from the E-M1.

While the E-M1 received raves from the imaging press, our reaction was somewhat tempered simply because of the high cost. The price value equation simply didn’t work for us when you can buy a Canon 70D, Nikon D7100, or Pentax K-3 for less – and get a superb enthusiast DSLR with a larger sensor in the bargain. The same issue held true for competing Compact System Cameras (CSC). With an asking price of $699 for the body or $799 with a 14-42mm II R kit lens, the new OM-D E-M10 is much more appealing. But there are definite tradeoffs so let’s start drilling down.

We won’t get into a tit-for-tat between the E-M1 and E-M10 but we want to point out how Olympus shaved the price. First off, the E-M1 is much larger and heavier with a magnesium alloy body; it’s dust-, splash-, and freeze-proof so it can really take a beating. That said, the new model is very compact and easy to carry around all day, which is a major plus. The E-M1 has a top shutter speed of 1/8000th of a second – like most enthusiast DSLRs – compared to the usual 1/4000 for the more affordable model. Olympus uses a 3-axis, built-in image stabilization system in the E-M10, compared to 5-axis in the E-M1; the E-M1 also has a more sophisticated combination of phase and contrast autofocus (AF) versus pure contrast detection in the cheaper version. It’s not all takeaways though – a real advantage for the new model is a built-in flash rather than one that fits in the accessory port. We won’t go into every niggling detail but that’s the top-line comparison. As for image quality both have 16-megapixel Micro Four Thirds (MFT) sensors and the same TruePic VII processors. The E-M1, however, does not employ an optical low-pass filter while the E-M10 does. The most important things are picture quality and that lovely price-value equation, which we’ll discuss later.

The relatively compact size makes it a nice alternative to lugging around a DSLR.

The E-M10 is available in an all-black textured body or two-tone black and silver. Our review sample was all black but the two-tone looks cool, in a retro sort of way. On the front is the MFT mount and Olympus has almost two dozen options beyond the 14-42mm kit lens, including wide-aperture primes such as the 25mm f/1.8 supplied for our tests. (The crop factor for MFT is 2x, so just double the numbers for the 35mm equivalent.) There’s a slightly indented grip but since the camera is small and very portable, forget about having the solid feel of a DSLR. To reiterate one more time, the relatively compact size –especially with the new slim zoom – makes it a nice alternative to lugging around a DSLR. Also on the front is an AF Assist lamp and lens release button. Overall the camera measures 4.7 x 3.2 x 1.8 inches, weighing 14 ounces with battery but no lens.

The top deck has the main mode dial, stereo mics, and the built-in flash. There’s also a hot shoe, two large jog wheels for changing settings such as exposure compensation and aperture/shutter speed, as well as a shutter. Additional nearby buttons include red-dot movie, Function 1, FN2, and Playback. Another point of difference with the E-M1 is a lack of an accessory port but since there’s a built-in flash this isn’t a real hindrance.

The E-M10 has a good EVF on the back rated 1,440k pixels, with a frame rate of 120 frames per second. This is about half the resolution of the E-M1’s so Olympus definitely saved some cash here. The detail is still quite fine and it’s very useable because of the fast frame rate. One side of the viewfinder has a diopter control while the other has a button that lets you switch between the EVF and the LCD display (there is also a sensor that does this automatically). The touchscreen LCD tilts so you can hold the camera at different angles, which can really add to your creativity. It’s rated 1,037k pixels and held up well in the Arizona sunshine. The negative we had with the screen was its response – it really needed multiple taps to kick in so for the most part we just used the OK button and four-way controller to make fast adjustments.

Other items on the back include a flash-up button, Menu, Info, Delete, and on/off switch. There’s also the just mentioned four-way controller with center OK button and a three pinhole speaker. Near it is a textured thumb rest for a comfy handhold. On the right side is a compartment with a rather flimsy door covering USB, A/V, and mini HDMI outs. The bottom has the battery and SD card compartment. There’s also Wi-Fi for sharing and remote operation via a smart phone or tablet, which we’ll talk about below.

Our camera comes with the 14-42mm kit lens – you can also get it without a lens – rechargeable battery, AC charger with cord, USB cable, and strap. The battery is rated 320 shots per CIPA rating, which is a good number. You also get a disc with Olympus Viewer 3 software and an instruction manual. You should also download Olympus Image Share software to your phone to post E-M10 images to Facebook and other social media sites.

We had no focusing issues whatsoever – the 81-point AF system is a good one.

Since we enjoy using wide-aperture primes, the 25mm (50mm, 35mm equivalent) got first crack. Using aperture priority, we had a lot of fun shooting some of the first blooms of Southwestern spring using manual focus. We got some really nice images with a smooth background blur (bokeh). The lens is a real winner, delivering very sharp images. Although not a true 85mm portrait lens, it worked very well with faces. The built-in flash did a fine job with this lens during a gathering of friends and family.

As usual we worked our way through the mode dial – check out our review of the E-M1 for more detail. Besides the usual settings it has access to Olympus’ fine array of Art Filters. With them and Art Effects you’ll have a lot of fun going beyond straight-ahead photos. Dramatic Tone remains a favorite (see sample). HDR and HDR Bracketing are also available if you want to try that effect as well.

We had no focusing issues whatsoever – the 81-point AF system is a good one. Overall response is pretty speedy too at around 3.5 fps with continuous AF. Don’t expect to crank off 100 JPEG bursts with this one since it doesn’t have DSLR capability, but it’s typical for mainstream mirrorless models. In case you were wondering, the more expensive E-M1 is rated 6 fps with C-AF.

The E-M10 has a basic ISO range of 200-25,600 with Low (100) and Auto also available. In our tests, the camera did an excellent job handling digital noise. Like the E-M1, it was solid to 800 with a slight deterioration as we moved up through the myriad options. Even at 25,600 you could use the file, albeit at a small size. In other words, you can shoot in dim light and achieve more than acceptable results. The unit’s 3-axis image stabilization did a fine job in eliminating blur at slow shutter speeds. There’s absolutely nothing to complain about here.

Even though the E-M10 takes videos, it’s a pretty basic setup. You have to shoot in i-Auto and as noted earlier, top resolution is 1080/30p. Even though Olympus warns of the potential of rolling shutter – and it’s there – we’ve seen CSCs and DSLRs perform far worse. Colors are fairly accurate and focusing is good without too much lag. Obviously there was no mechanical noise with the prime – our favorite lens of the bunch – and the zooms were quiet, too, since they have Movie and Still Compatibility (MSC) for silent operation. Although the videos are good we just wish Olympus would get with the 60i/60p program.

The E-M10 has built-in Wi-Fi. Once you download Image Share to your iOS or Android phone or tablet, pairing is very simple. Simply touch “Wi-Fi” on the camera’s LCD display (a couple of times, unfortunately, due to the less-than-responsive touchscreen), then a QR code pops up on the touchscreen and a scanner window appears on your smartphone. Get the code in the proper position and now you have a link between the two devices. You can easily import images to your phone, then send them on their merry way. The app is solid, letting you add geo-tag to your shots, remotely control the camera, and even do some basic editing.

The E-M10 is a solid CSC we can easily recommend. With a $799 kit price, it’s much more competitive versus other mirrorless models, and its size and light weight make it a good option for those moving up to an interchangeable lens camera from a compact; it also makes an ideal travel camera. Any Olympus PEN owner looking to upgrade will be very happy with the E-M10.

So, here’s our reason why we feel it’s still somewhat pricey. Is the camera better than a Fujifilm X-M1 or a Samsung NX300, which have larger APS-C sensors and cost less? No, but Olympus fans will be pleased with this new camera that lets them use their MFT glass to take fine photographs, and that gets our recommendation.

Best microSD cards for 2022: top picks for your camera, tablet, or drone
The DJI Osmo Action 3 looks nothing like the Action 2
GoPro Hero 11 Black leak suggests a moderate upgrade
The best iPhone tripods for 2022
Nikon’s new 800mm lens for Z-mount cameras lightens the load
ReelSteady makes GoPro Player ‘reel’ useful for filmmakers
GoPro takes to the skies with the Hero10 Black Bones
How to turn off the camera sound on an iPhone
24 amazing images of our planet for Earth Day
Instagram test lets you pin particular posts to your profile
Snapchat’s pocket-sized Pixy drone takes to the skies
DJI Mini 3 Pro unboxing video drops just ahead of launch
GoPro Hero 10 Black vs DJI Action 2 vs. Insta360 One RS: Clash of the action cameras