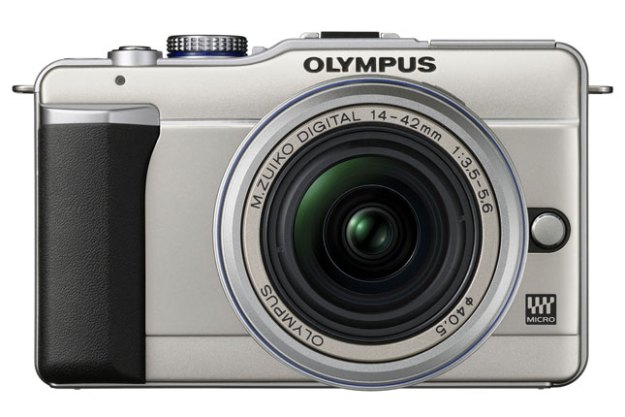 It’s hardly a secret that Canon and Nikon dominate the DSLR market. Rather than beating their heads against the wall by competing directly against them, other manufacturers are zeroing in a new type of camera—one with a large imaging sensor, smaller size and interchangeable lenses so you can get the photographic benefits of a DSLR without breaking your shoulder carrying it around all day. Olympus and Panasonic have jumped into this arena and Sony is planning to join them later this year. One of the newest of these cameras is the Olympus PEN E-PL1 which uses the same 12MP chip found in the company’s much larger and heavier E-30 and E-620 DSLRs. Let’s see if Olympus has delivered on the dream and if you should consider it instead of a DSLR.

Pick up the new PEN and it looks like a 35mm film camera from back in the day. With the optional 17mm f/2.8 pancake lens attached, it has a boxy, retro shape some might find cool while turning off others. We liked it and it’s a real standout, but check out the accompanying photos to see if this design appeals to you. The camera measures 4.5 x 2.8 x 1.63 (WHD in inches) and tips the scales at 15.8 ounces with the pancake lens and battery. It’s definitely not as bulky or heavy as a DSLR, but wafer thin it’s not.

Our review sample had a steel blue color, but all-black and silver editions are available. The front of the E-PL1 is dominated by the lens opening which accepts Micro Four Thirds glass. Unlike Canon and Nikon, there are just a handful of lenses for this system, but with a $199 adaptor, you can use a respectable selection of Four Thirds lenses (from Olympus, Panasonic and Sigma). Also on the front is the lens release button, self-timer lamp and a nice grip with a textured finish.

The top has a manual pop-up flash, a hot shoe, mic, shutter and on/off button. The mode dial looks just like something from an old film camera but the options are decidedly 2010. There’s iAuto, Program, aperture- and shutter-priority, full manual, Movie (720p), Scene (19 options) and Art. This is a trickle down from the company’s DSLRs and it lets you add special effects to your shots. We were partial to Pop Art with the larger cameras and liked having that option with the PEN.

On the back is a 2.7-inch 230K LCD screen that held up very well, even in direct sunlight. This is a good thing since adjusting the intensity is buried in the menu system. If you slide out the hot shoe protector you’ll notice an accessory port. This is required to operate the optional VE-2 Live Finder but at $279 it’s way too much cash for the few times you might need it. All the other keys on the back are standard stuff for a digicam or DSLR: a red dedicated video button, Playback, Menu, Info, Delete and the four-way controller with center OK button gives access to the flash, burst shooting, metering zone, and exposure compensation. The speaker is on the back as well.

On the right side is a compartment for USB and mini HDMI outs, while the battery/card compartment and tripod mount are on the bottom. The “Designed in Tokyo, Made In China” camera accepts SDHC cards and you should use Class 6 or better if you plan to shoot video.

The camera, battery, charger, USB and A/V cables, strap, 124-page manual and CD-ROM with ib software for handling images. The kit lens is a Micro Four Thirds M.Zuiko 14-42mm zoom (28-84mm 35mm equivalent). The battery is rated 290 shots per the CIPA standard, a decent number but much less than a DSLR. Of course, they’re bigger and weigh more so there are always tradeoffs.

With a 4GB Class 6 card in place, it was time to capture stills and HD videos.

We used the PEN E-PL1 for many weeks. Although we had the 14-42mm kit lens, the $249 17mm f/2.8 lens was used most of the time. We just preferred the smaller size and the 34mm 35mm equivalent lens—especially as we walked the picturesque streets of New Orleans. The E-PL1 uses the same 12.3MP Live MOS sensor as the company’s DSLRs so the digital factor is a similar 2x. This imaging device is one of the key selling points of the PEN since it’s eight times larger than the devices found in compact digicams. A larger sensor means better color and less noise in low light—at least in theory. More on this in a bit.

Before getting into the results, let’s say the E-PL1 is a fun camera to use. It has a nice, comfy feel and focuses quickly thanks to an 11-area AF system. We were pleasantly surprised by this since the camera does not have an AF Assist lamp. It does have built-in imager shift stabilization so every lens you attach is stabilized. This helps eliminate blur and saves money since you don’t have to buy more expensive IS lenses (something Canon and Nikon make you do).

Since the camera uses a Contrast Detection focusing system rather than Phase Detection, it’s slower than a DSLR. The PEN does 3 fps for a maximum of 18 high-res JPEGs versus 4 fps up to 100 JPEGs for the Nikon D5000. Also the quickest shutter speed is 1/2000th for the Olympus, 1/4000th –at least—for most DSLRs. Also ISO tops out at 3200 whereas most new DSLRs are 6400-plus. This is not to say DSLRs are slam-dunk-better, we’re just pointing out the differences and tradeoffs.

Note: while the E-PL1 does 3 fps, you really should turn off the Review function as this noticeably slows down the camera. Since you’re framing your shots using the Live MOS sensor on the 2.7-inch LCD rather than a viewfinder, “review” is annoying. We also prefer the pop-up flash to work automatically in low light rather than manually but that’s just us.

Enough with the photo geek speak—let’s talk about the prints and movies. In a word, the stills are outstanding. Colors were natural and really on target. The many shots taken in NOLA really popped. Of course the red and yellow street cars looked great in sunshine but the old cemetery statuary in shadows also were fine. Overall, the photos were among the best we’ve seen in a long time, besting some DSLRs. What this really means is that the quality of the lens as well as the size of the sensor are key for good images (most of our photos were taken with the 17mm pancake lens).

When it comes to ISO and digital noise, the benefits of the larger sensor were immediately recognizable. Even at ISO 3200, noise was under control for our test subject when enlarged on the monitor and with 8×10 prints. You’d be hard pressed finding any digicam that handles noise this well.

The camera takes very sharp macro images and the Pop Art filter is a lot of fun, turning green spring trees into a ‘60s fall dream-like vision. Used discretely it’s a nice tool in your kit.

As for videos, the 720p at 30 fps on a 50-inch plasma HDTV via HDMI were decent but nothing to shout about. They’re simply not at the level of the AVCHD clips taken with the Sony TX7.

We give Olympus well-deserved plaudits for blazing a trail with a new type of camera. We really enjoyed shooting the PEN and especially the results it cranked out. Although compact and loaded with features, the E-PL1—even though it takes very high-quality stills–is just a bit too expensive for our taste. We’d love to see it below $500 for the kit. The other issue is the lack of lenses for the Micro Four Thirds system. It’s not even close to the roster of Canon and Nikon. Yes you can buy an MMF-2 adaptor so additional Four Thirds glass attaches to the PEN but that sets you back another $199. Still the PEN E-PL1 bridges a yawning gap for those shutterbugs who want the flexibility and quality of DSLR, but not the bulk.

Note: Panasonic is introducing the G10, a similar Micro Four Thirds camera for $599 with a 14-42mm lens sometime in May. It has a viewfinder unlike the E-PL1 as well as a more potent battery. We’ll test one as soon as we can. In the meantime, check this PEN out.