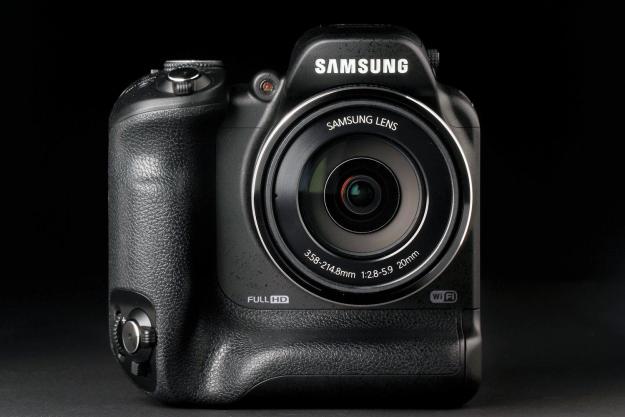 “The Samsung WB2200F is somewhat of a strange-looking duck, but definitely check it out if you’re in the market for a mega-zoom.”

Without doubt, Samsung’s WB2200F is one of the most unusual-looking digicams we’ve handled in recent years. This $450 16.4-megapixel bridge camera packs a 60x optical ultra-zoom lens in a package that resembles a $6,000-plus DSLR. But, just because it looks like a DSLR, doesn’t mean it functions like one. We tested it against the Nikon Coolpix P600, another DSLR-inspired bridge camera with a 60x optical zoom lens, to see how well it handled through similar paces.

Don’t feel embarrassed about mistaking this camera for a DSLR. With the WB2200F’s Dual Grip system, it mimics those of high-end DSLRs used by pros (think Nikon D4S, D3X, and Canon EOS-1D X). Those DSLRs, however, are priced well over $6K just for the body, and perform far better, since the WB2200F has the heart and brain of a point-and-shoot. This intentional DSLR-like two-grip design gives you a second set of controls when you turn the camera from landscape to portrait position; it’s also especially handy for keeping the camera stable in your hands when you’re zooming out to full telephoto. Another benefit of this bulky design is it accommodates a much larger battery (600 shots), compared to the 300 shots of the Nikon P600.

The intentional DSLR-like design is handy for keeping the camera still.

The WB2200F measures 4.7 x 4.8 x 4.1 inches in the off-position and weighs 26 ounces with the battery; depth extends to around 7 inches at full telephoto. Due to the Dual Grip, it’s much taller than most consumer-oriented cameras, so it’s really, really big. We found the textured-surface grips to be very comfortable, but always do your own hands-on test. On the front is the 60x optical zoom (20-1,200mm, 35mm equivalent) with maximum apertures of f/2.8-5.9, which is slightly wider than the f/3.3-6.5 aperture range of the P600’s 60x lens (24-1,440mm). There’s optical image stabilization to eliminate most of the shakes from handheld shots (no system is 100-percent perfect, however, so use proper stabilization techniques when the telephoto is maxed out, like bracing yourself against a wall or using a monopod). There’s an AF Assist lamp nearby to help with focusing. On the left side of the lens is the i-Function button, a system similar to the one found on Samsung compact system cameras; depending on your shooting mode, it provides access to an attractive graphic user interface (GUI) for changing shooting parameters.

On the top deck is the built-in flash as well as stereo mics for the Full HD videos. Nearby are the main mode dial, a jog wheel, and buttons for power and Direct Link. Direct Link gives quick access to your selected Wi-Fi option. Near the front of the grip is a shutter button surrounded by a zoom toggle. A similar set of controls is on the bottom right corner (jog dial, shutter, zoom toggle) as well as a lever to lock the controls to prevent inadvertent shots from being taken.

On the back are two critical features: the electronic viewfinder (EVF) and LCD screen. The EVF is small, rated only 200K dots. In comparison, the P600’s EVF is bit darker and less readable, but neither is great nor do they have eye sensors that switches automatically between the EVF and LCD (you have to press the nearby “EVF” key). The P600 has a stronger LCD due to its 3-inch tilting screen that’s rated 921K pixels, versus 460K for the WB2200F’s fixed screen. On the plus side, the WB2200F’s LCD stood up to direct sunshine once the brightness setting was pushed to the maximum level.

Even though there’s a lot of space on the back of the camera, Samsung didn’t go crazy and filled every inch with buttons. You’ll find the usual assortment of camera buttons, and all are well labeled and familiar. Noteworthy is a second exposure compensation button to use when you’re holding the camera in the portrait (vertical) position.

On the right side are two compartments with solid hinges covering USB and HDMI outputs, as well as the SD card slot. On the left are flash open and the EVF diopter control. There’s also an NFC tag for quick Wi-Fi pairing (if your phone supports it, that is), a tiny speaker, and a battery compartment.

The camera comes with the battery, USB cable, and AC adapter, lens cap, strap, and quick-start guide. Since the battery charges in-camera, there’s no battery charger. Unlike Samsung’s higher-end cameras, there’s no free version of Adobe Lightroom included – not even basic photo-editing software. (Samsung’s i-Launcher software can be downloaded from the company’s website.)

The WB2200F uses a 1/2.3-inch 16.4-megapixel back-illuminated CMOS image sensor. It’s the same size as the P600’s 16-megapixel sensor (and many point-and-shoot models), but the backside illumination should provide improved results overall, especially in dimly lit scenes – that’s the theory, at least. Best resolution is 4608 x 3456 pixels (Super Fine). Like the P600 there’s no uncompressed RAW option, but Samsung offers three JPEG compression levels rather than Nikon’s two. Best movie quality is 1080/30p using the MP4 format – similar to the P600. We set the camera to highest quality settings for our tests.

We’ve reviewed many Samsung cameras and really like the GUI. It’s bright, colorful, and simple to follow. We had the help function turned on so brief captions appeared, to walk you through the system. But you won’t really need it, as the camera isn’t complicated to use.

The main mode lets you choose Smart Auto, Program AE, and ASM (aperture-priority, shutter-priority, or manual). The S (Smart) setting has 12 scene modes, while Star has photo and movie filters plus rudimentary photo editing. There’s also Settings, which is unusual since that’s usually buried in the menu system in other cameras. Finally, there’s Wi-Fi, which is different than Direct Link since this gives you access to all your wireless options (MobileLink, Remote Viewfinder, email, SNS & Cloud, and Samsung Link/DLNA); Direct Link takes you to just one of those options, of your choosing (more on these in a bit).

Multiple shooting options and pretty menus are nice to have, but with this camera, it’s all about that 60x optical zoom. There’s really nothing better than having a range of 20mm to 1,200mm in a portable package that doesn’t require attaching a heavy, bulky interchangeable lens. During testing, we had the WB2200F and the Coolpix P600 with us, shooting a variety of scenes and subjects.

One big issue we had with the P600 was the uneven focusing. If you didn’t have a hard edge or sharp contrast for the zoom to grab focus, you were in trouble. We snapped many of the same scenes and rarely had a problem with the WB2200F. Not that it was perfect, as a faraway mountain ridge on a slightly overcast day was a challenge to photograph, but it was not nearly as problematic as with the P600.

While we were out taking a touristy boat ride on a lake, the captain pointed out to a sheep in the far distance. What is normally something that’s difficult to see with the naked eye, we were able to quickly zoom onto it at full telephoto and grab the image. Granted, the shot wasn’t National Geographic sharp, but the results were quite impressive – this is what that 1,200mm focal length is all about.

We like the color, feel, and tone of the images.

The Samsung has a speedier burst rate than the P600 (8 frames per second vs. 7), however, both have the same issue: shoot a full burst and the camera basically goes into a standstill as it saves photos to the card. We had some good luck capturing jet-skiers and boaters on a lake, but had more misses than keepers. The WB2200F was better at photographing static subjects: we preferred the color, feel, and tone of the Samsung camera, although the P600 did a fine job, we must acknowledge.

This mega-zoom has an ISO range of 100-6,400, which is fairly standard for such a small sensor/lens combo. Since the WB2200F is essentially a standard digital camera even though it looks like a DSLR, sensitivity is not a high point. In fact, the P600 trumped the WB2200F in this area. In our tests, noise became noticeable at ISO 400, and really fell apart at 1,600. If you purchase this camera, keep the ISO as low as possible.

Videos, for the most part, were decent with fairly accurate color. The camera had some trouble focusing as we zoomed through the focal range, but performance was better than the P600. Smooth and steady is the way to go, with gentle pans rather than frenetic POV clips.

We have never been shy about how we much we like Samsung’s Wi-Fi camera/smartphone implementation (Sony’s too). It certainly helps having major smartphone divisions under the same roof, compared to other companies like Nikon, which is still a laggard. Samsung’s Smart Camera app (iOS and Android) makes it very easy to pair your camera and phone. We had no issues pairing the camera with an older Droid 4 for our tests, but if you have a compatible Android device with NFC (Samsung called it “Tag & Go”), the pairing process is quicker (first-time use will require an easy setup); we’ve had success using it in other Samsung cameras. (Otherwise, NFC is pretty much useless.) Once connected, it’s easy to transfer images between the camera and the phone. You can also use your phone as a remote control. Beyond the app, the camera lets you email images and transfer directly to Facebook, Picasa, YouTube, and Dropbox. And if you own DNLA devices such as an HDTV, you can wirelessly display images here as well.

If you can get beyond its rather unusual shape and bulky size, the WB2200F is a mega-zoom we can easily recommend. Available for $450, it’s a better performer than the Nikon P600 and, based on MSRP, it costs less. Overall we were quite pleased with image quality (still and videos), focusing response, the optical image stabilization system, and the 60x lens. Definitely check out this somewhat strange-looking duck if you’re in the market for a mega-zoom.

Best Samsung TV deals for May 2022

Best Apple Watch deals for May 2022