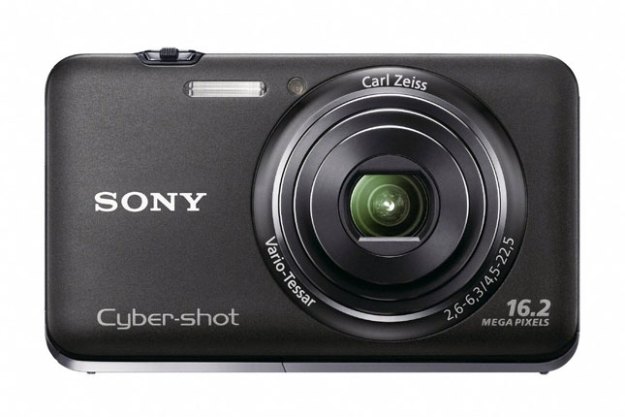 You’ve heard of 16-megapixel DSLRs—how about a 16.2MP point-and-shoot? That’s what Sony just introduced and the WX9 not only takes 4608 x 3456 pixel photos, but Full HD AVCHD videos which is a very unique combination. Let’s see if this is finally the “best of both worlds” device we’ve been searching for.

A quick glance at the DSC-WX9 with its Carl Zeiss Vario-Tessar 5x 25-125mm lens won’t leave you super impressed. Available in silver, red or black (our review sample), the camera has the classic Altoids tin shape, although it’s actually smaller and thinner than the candy carrier. Measuring 3.75 x 2.25 x .78 (WHD, in inches), it weighs 4.9 ounces fully loaded. In other words you can carry this around all day with your smartphone and still not be burdened. As a capture device, it’s so much better than an iPhone, iPad or Droid it’s ridiculous, but we’re getting ahead of ourselves. The camera has a nice matte surface which is fine but there’s too much text surrounding the lens and it could lose the “16.2 megapixels” nomenclature. Then again, there’s nothing on the surface to let you know how much firepower is inside. Also on the front is the flash and AF Assist/self-timer lamp.

The top has the shutter with surrounding zoom toggle, on/off button and two pinhole mics for stereo sound.

The 3-inch LCD on the back is another strength—it’s a 3-inch screen rated an excellent 920K pixels, a spec you’ll usually find on much more expensive cameras. It has very good contrast and black levels—you’ll like framing and reviewing your images since what you’ll see is very realistic. The screen does wipe out in direct sunshine, so this is a bit of a negative, therefore we’ll take perfection off the table. Unfortunately, adjusting screen brightness is buried several levels down in the menu system. How we wish manufacturers would make this important process more accessible. Naturally the LCD takes up most of the rear real estate but there are several key controls on the right. There’s a main mode switch to move between camera, panorama and movie recording. There’s also a red-dot button for quickly taking videos even if you’re not in movie mode. Below these two is a very cool circular controller with a center set/OK button. Just turn it and your shooting mode options appear on the right side of the screen so you can quickly pick the one you want.

Options here include Intelligent Auto, Superior Auto, Program, Background Defocus, Scene (14 options) and 3D. This is definitely an aim-and-forget camera, yet there is some panache. Intelligent Auto is like the Smart Auto found on most new digicams where the camera guesses the subject in front of it and makes the appropriate adjustments. We’ve found this works well in almost all instances and models. The WX9 takes it further with Superior Auto combined with HDR which takes 6 shots of your subject and quickly merges them to help cut down on noise and increase dynamic range. It slows things down a bit but the results are worth it. This is just one plus of the super-speedy CMOS chip; a 10 frames per second burst mode is another when you’re in Program. Going beyond the ordinary is the Background Defocus option that blurs the background while leaving your main subject in focus (it combines two frames to achieve this effect). With 3D you can grab stills shot in the MPO format viewable on a 3D HDTV. You can grab single 3D frames and 3D Sweep Panoramas as well when you’re in the Panorama mode. And finally you can shoot videos in the AVCHD format at 24 Mbps, better than many full-blown camcorders. Not bad for a $219 camera…

The control wheel not only lets you browse through shooting options but by pressing the four corners you can adjust the flash, self-timer, burst mode and display to adjust how many icons you want to appear on the screen. The camera has grid lines to keep your horizons straight. Also on the back are buttons to access the menu, to delete files and go into playback mode.

On the right is a compartment for a mini HDMI cable, the eyelet for the wrist strap while on the bottom is a tripod mount and Sony’s proprietary output adaptor. This multi-connector used to drive us off the deep end as you needed a special Sony cable to watch stills and videos on your HDTV. Now with the mini HDMI out, this is a non-issue, praise be! While you still have to buy a mini HDMI cable, Sony supplies the special cable which also has a USB connector. You’ll use this to download stills/videos to your computer and it charges the battery when connected to a PC. It also connects to the AC adaptor since you have to charge the battery in-camera rather than with a separate plug-in charger. This is another of the WX9’s negatives since the battery lasts 210 shots–your camera will be out of action as it charges–there goes perfection again. In the battery compartment on the bottom is a combo slot for Memory Stick Pro-HG Duo or SDXC cards. We suggest 8GB high-speed editions as you’ll quickly fill your cards, given the AVCHD video, 16.2MP bursts, 3D stills and Sweep Panoramas.

Loading an 8GB card and with a charged battery in place, it was time do put the camera through its paces.

The Sony Cyber-shot DSC-WX9 is one of the first cameras with a new class of 16.2-megapixel Exmor R CMOS sensors. This is not the same Exmor imager found in the company’s NEX and DSLR models. Those are much larger; here it’s the typical 1/2.3-inch dimension of a point-and-shoot. DigitalTrends.com readers know this size sensor has the potential for noisy images even at low ISOs (200-400). Anything higher is usually asking for trouble. In general, CMOS sensors combined with the right processors aren’t nearly as noisy in low light compared to CCDs other than the 10MP versions found in quality cameras like the Canon S95 or Panasonic LX5. CMOS chips are also much faster, letting the cameras perform more tricks including improved burst modes and enhancing dynamic range.

We used the WX9 over the course of several weeks taking it on a trip to Brooklyn’s Coney Island along with several other cameras we were testing, including a Nikon Coolpix S8100 and Canon PowerShot 300 HS. The camera also took a trip to Manhattan at night and the bucolic ‘burbs of New Jersey (don’t laugh; this was not Snooki land) as well as Washington D.C to catch the sights and early blooms of spring. Once finished, stills and videos were downloaded to the PC, 8×10 prints made, images enlarged 100%+ on the monitor and everything was checked out on a 55-inch Sony Bravia 3D EX720 HDTV.

Before getting to the results, let’s state the DSC-WX9 is a fun, compact camera. Carrying it everywhere is a pleasure. The camera focuses quickly as it has a 9-point AF system, far more sophisticated than the usual 3 of a low-end point-and-shoot. We especially liked the wide-angle Zeiss lens. Even though you give up some range on the telephoto side, the camera really adds a nice perspective distortion to your shots. This is our viewpoint and you definitely should do your own eyes-on test before you buy. And even though it grabs 10 fps in Program, you can only take single images in Intelligent Auto and Superior Auto and these are relatively slow as the camera processes multiple frames. Don’t get us wrong—this is not pokey slow but it’s best for static subjects as the results are well worth the wait. Shooting videos is also a breeze although as with all cameras, the mics can pick up the sound of the zoom mechanism and make gentle breezes sound like the flight deck of an aircraft carrier. Now on to the results…

We’re happy to report the digicam takes very high-quality stills—and the videos demolish any camera at the price. After all, it takes AVCHD movies at 24 Mbps, a far better codec than most other Full HD models on the market. They looked great on a 55-inch screen with fluid motion and accurate colors. Unfortunately, the stereo mics cannot handle even the gentlest breeze without distorting the sound. Guess we can’t have everything. Yet this is just a minor distraction compared to the fine photos you can take with this camera. Colorful Coney Island street signs looked great as did the classic red parachute jump. We took some Sweep Panoramas of the boardwalk and surrounding areas–the images were top notch. We’ve always liked this feature and it’s quite impressive on the big screen. Overall you’ll really like photos taken outdoors as the colors really pop—we’d say they compare to the more expensive Canon PowerShot 500 HS–and the WX9 costs almost $100 less. Most of our shots were taken at the highest resolution using Superior Auto. Optical Image Stabilization did a good job keeping images sharp.

We have to give the Canon 300 HS/500 HS and Nikon S8100 (all newer CMOS cameras) better marks as far as digital noise is concerned. The Sony was good up to ISO 800 and had problems at 1600/3200 whereas the others controlled artifacts and kept the colors more accurate at those levels.

One area the Sony totally tops the competition is 3D. The WX9 not only takes 3D stills but 3D Sweep Panoramas as well. 3D stills can be viewed on any compatible 3D HDTV as they’re MPO files, but you can only see the “Sweeps” on a Sony 3D HDTV. We don’t think this should be the reason for buying a new 3D television but the effect is fairly decent with a reasonable amount of depth. It works best in bright light and doesn’t have the motion or sensation of the JVC GS-TD1 but that camcorder costs a cool $1,699, not $219! Also lagging behind is Background Defocus which simply cannot replicate the effects of a DSLR’s depth-of-field options.

Insta360’s next camera could be amazing for lowlight photography
The best 360-degree camera apps for iOS and Android
The Insta360 Sphere is a virtual invisibility cloak for drones
DJI Mini 3 Pro unboxing video drops just ahead of launch
Nikon’s new 800mm lens for Z-mount cameras lightens the load
ReelSteady makes GoPro Player ‘reel’ useful for filmmakers
GoPro takes to the skies with the Hero10 Black Bones
How to turn off the camera sound on an iPhone
24 amazing images of our planet for Earth Day
Instagram test lets you pin particular posts to your profile
Snapchat’s pocket-sized Pixy drone takes to the skies
GoPro Hero 10 Black vs DJI Action 2 vs. Insta360 One RS: Clash of the action cameras
Landscape photography contest offers special Iceland prize