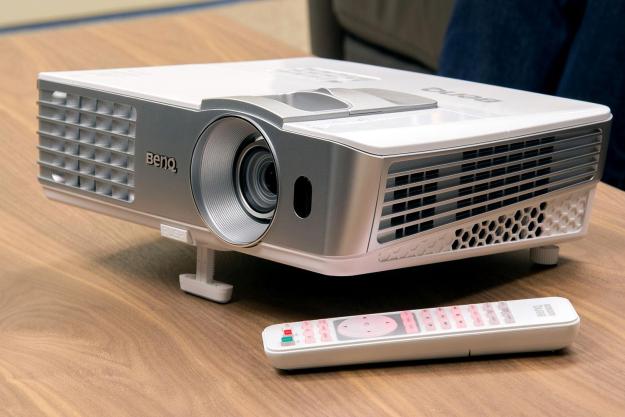 “If you’ve been on the fence about buying a projector, hop on down and pull the trigger. The HT1075 is a sure thing.”

So you’ve decided to take your home theater setup to the next level with a projector and projection screen, and you’re looking to keep the price under $1,000? Welcome to the club … it’s a big one, and growing every day.

There’s just something about that $1,000 price point, isn’t there? Perhaps that’s because a decent projector and screen combo can deliver some serious cinematic wow without necessarily breaking the bank. Fortunately, manufacturers have caught on and are now producing sub-$1k projectors that fold in features once reserved for premium models, like lens shifting, 3D capability, and optional wireless HD signal delivery.

With our recommendation already out of the way, we think this review will best serve you by explaining what to expect from the HT1075, and more specifically, how it compares to a step-up model like the Epson Powerlite Cinema 3020E (available for $1,400 online).

It’s clear that BenQ wanted to keep the HT1075 portable. The projector weighs 6.3 lbs., measures 12.2 x 9.6 x 4.1 inches, and is built with a tough plastic shell, making it perfectly portable for backyard movie nights (at your place or a friend’s), or turning your bedroom into a pop-up movie theater for the night.

In the box with the projector you’ll find a backlit remote control with batteries, a power cord, user manual on CD with printed quick-start guide, and a lens cover.

If you want 3D glasses, they’ll run you about $40 a pair on Amazon, and you’ll want to prepare yourself to look nerdy because these glasses are anything but stylish. Other accessories include a soft carrying bag, ceiling mount and spare lamp kit (always a good idea to pick up at time of purchase so one is handy when you need it).

The headlining accessory, however, is BenQ’s Wireless FHD kit, which allows users to beam signals from their sources to the projector without long runs of HDMI cables. For those looking to install a projector in a finished room, this is a killer feature. Unfortunately, the wireless kit comes at a premium: $345 at Amazon.

On the plus side, the kit does allow for up to two HDMI sources, making a source switcher like an A/V receiver unnecessary for those who only need to connect, say, a Blu-ray player and game console. It can also work through walls at distances of up to 100 feet, which is more than what many wireless HD transmitters can boast.

If you’re building a home-theater room from scratch, then you have certain luxuries where projector placement/positioning and wiring are concerned. But for those who must fit a new projector into an already finished room, features that facilitate flexible placement and positioning are always going to be desired. Fortunately, the HT1075 excels in this regard, including both horizontal and vertical keystone correction, 1.3x zoom, and vertical lens shift. All that adds up to make the HT1075 an incredibly easy projector for users to set up.

Sometimes it just isn’t possible to place a projector at dead-center with its projection screen. Horizontal and vertical keystone correction will take the trapezoidal image you get when a projector is shooting from off-center, and turn it into a well-justified rectangle or square shape. Vertical lens shift allows users to move the image up or down to better fit within the screen area, requiring less propping up with magazines or books when placed on a shelf, table or cabinet. Zoom allows the image to be adjusted to fill the screen area without having to move the projector itself forward or back.

Adding to the HT1075’s versatility is 2200 ANSI lumens of light output, which is enough to produce easily visible images in less-than-totally-dark rooms. For perspective, one of the brightest projectors we’ve tested in the sub-$1K category, the ViewSonic PJD-7920, boasts 3,000 lumens, and we had to tone it down quite a bit during our evaluation.

The handiness of a backlit remote – particularly for use with a projector – can’t be overstated. The remote that comes with the HT1075 is one of the brightest and most legible we’ve seen. Its button layout also makes sense, making it easy to use, even in pitch-dark rooms.

Finally, we’re happy to report BenQ has done a few things to reduce this projector’s total cost of ownership. In SmartEco mode (which reduces total brightness – not a problem for most scenarios) will extend lamp life up to 6,000 hours. To put that into perspective, you’d have to use the projector 5 hours a day, every day, for nearly three years to burn it out (replacement lamps currently run $250). Clearly, most folks will get a lot more life out of the HT1075’s lamp. When replacement is necessary, though, the lamp can be easily accessed through a door on the top of the projector, making access when mounted upside down super easy.

BenQ has also outfitted the projector with a sleep mode that reduces power consumption down to ½-watt when plugged in but not in use.

We tested the HT-1075 with an Oppo BDP-95 universal disc player, an Xbox 360, and a Roku streaming stick (thanks to the projector’s MHL HDMI input), and ran all but the Roku through a Pioneer Elite SC-79 A/V receiver as a source switcher. The Pioneer receiver and projector were linked with a 15-foot HDMI cable since the wireless FHD kit was not available for this review. Over the course of our evaluation we placed the projector in four different room locations (mounted from the ceiling, on a table in the center of our room, and on small tables to both the left and right of our seating position. Our projection screen for this review was a 110-inch 16:9 Da-Lite pull-down projection screen. Room lighting varied from pitch-black to medium bright (no direct sunlight ever shone on our screen).

The BenQ HT1075 took the place of the Epson Powerlite Home Cinema 3020 that has been resident in our system for the last six months or so. Given the Epson costs about twice as much as the BenQ (thanks to a boatload of included features), we were expecting a noticeable drop in overall quality, but we ended up surprised at how well the HT1075 held its own, producing a more-than-adequately bright image with natural-looking colors, and genuinely film-like feel to the image.

The HT1075 got broken in with some scenes from animated flicks like Tangled, Frozen, and Finding Nemo … because 6-year old daughter. Images were bright and brilliant, but it was the HT1075’s color accuracy that stole the show. To the naked eye, colors appeared spot-on. While using the projector’s cinema pre-set, reds were rich and deep without crossing over into eye-searing territory, and subtle shades of yellows and oranges played in perfect harmony. In short, it boasts the best out-of-box color we’ve seen at this price point.

Turning quickly to adult fare, we loaded up Prometheus, Skyfall, and The Hobbit: An Unexpected Journey. The common denominator among these films is plentiful scenes with deep blacks and plenty of shadow detail. Here is where must sub-$1,000 projectors fall short, and while the HT1075 didn’t manage a perfect rating here, we did notice it did a better job than the both the aforementioned Viewsonic and the Optoma HD26.

Perhaps the best thing we can say about this projector’s picture quality, though, is that it never distracts you in any way, allowing you to become immersed in whatever you’re watching. The sheer scale of the image combined with ample brightness and gorgeous colors make the HT1075’s work a treat for the eyes.

Of course, the projector does have a few negative points as well. Since it uses a conventional lamp, the projector puts out a lot of hot air – you’d be wise not to use it in a room with no air conditioning during the summer months. Another by-product of that lamp’s heat is the fan noise generated by trying to keep it cool. We measured the noise at about 48 db measured from 1 meter – nothing wildly out of line with this style of projector, but perhaps enough to annoy the uninitiated during quiet movie scenes. Finally, this is a DLP projector, and that means it uses a color wheel. Some folks are sensitive to a sort of “rainbow effect” that is generated by DLP devices, so if you were ever bothered by a DLP TV, you might want to steer clear here and consider an LCD-based projector instead.

We’re thrilled that a projector of such high quality can be had for under $800. That the HT1075 also happens to be extremely user-friendly is a real coup for BenQ. If you’ve been on the fence about buying a projector, feel free to hop on down and pull the trigger. The HT1075 is a sure thing.