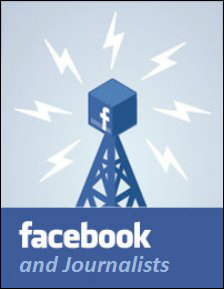 Whether for better or worse, social media continues to play an increasingly important and influential role in journalism. If the Internet put information at our fingertips, social networks are annotating, researching, and sourcing it for us. That’s not to say it’s destroyed reporting (although, plenty say it has), but it’s definitely changed it. In some cases it’s made it trickier for writers to know what’s real and what’s not: Too many average Joe’s are technologically savvy enough to create a rumor that becomes a craze, and the digital world in particular is rife with this kind of thing. Of course, social networking sites have also made reaching out to hard-to-contact sources far easier and the chances of receiving a comment from important higher-ups far better. So it’s not all bad. Definitely controversial, but not necessarily evil.

Twitter and Quora have become well known for their aid to journalists and researchers alike, and now Facebook’s trying to get in the club as well. The site launched its new Facebook for Journalists platform, a tool, it claims, to be “an ongoing resource for the growing number of reporters using Facebook to find sources, interact with readers, and advance stories. The page will provide journalists with best practices for integrating the latest Facebook products with their work and connecting with the Facebook audience of more than 500 million people.”

Sure, users Facebook may have, but industry pull it does not. At least not yet. Up until this point, Twitter and Quora are the sites du jour for writers looking for a story, or trying to dig up one. Twitter’s bite-sized information and dearth of insiders using the site makes it a natural platform to find a story. There are an innumerable amount of reports that have begun with nothing more than an executive’s tweet. And Quora has become a natural outlet: It’s got some pretty prestigious clientele actively using the site, keen to ask and answer questions. And of course, you’re able to plant the seed for a story right there and hope the likes of Mark Zuckerberg or Kevin Rose will feel compelled to answer.

And Facebook wants a piece of the action. While it’s inarguably influential, even to the point of spurring global change, professional it is not. Its’ very purpose (at least originally) is to make news out of what your girlfriend and brother and roommate are doing, not world events. But the site’s obviously taking steps to add some of that in: In addition to its journalist-dedicated page, President Obama is slated to appear in a live streamed event later this month.

What seems to be more important than providing journalists with yet another way to find information is providing them with some evolving ethics on the matter. The blogosphere and digital reporting arena would do well to have a coalition helping mold this new ground – and Facebook has one thing Twitter and Quora definitely don’t: More than 500 million active users who spend 700 billion minutes on the site a month.