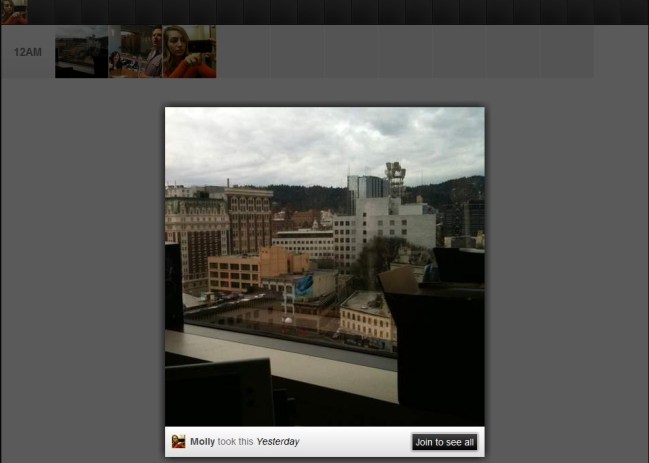 Are you sick of Color already? Maybe just the deluge of puns involving the app’s name that are sure to continue hitting your news feed? It’s not even out of its infancy and already it’s taking over. Based on the idea of creating a social network that is entirely location-based and contains nothing more than various photo-streams, Color is making headlines for its potential to unite strangers as well as the ever-trending mobile, social, and location platforms. And of course, it’s also being heralded as the straw that broke privacy’s back. With all the fanfare surrounding the digital world’s game-changing new app, we had to give it a shot.

Let’s address some of the more objective aspects of Color. Right off the bat, Color isn’t an entirely intuitive experience. The initial setup has a familiar, businesslike feel to it: You fill out a simple form (anyone else find catharsis in filling out forms?) asking your first name and for a self-portrait. And then it gets sort of isolating – albeit, most of this can be attributed to the fact that Color hasn’t found a wide audience yet. Even still, the UI is a cluttered, busy experience – and a wordless one at that. It’s all symbols and images, without accompanying user explanation. For example, choosing an individual image from the photo stream courtesy of anyone within your 150 foot radius yields three graphics. It took awhile to determine what each did and while Color’s clearly going for a minimalist approach, it’s done that and some – to the point of mild confusion and occasional annoyance.

All that said, some of Color’s randomness is a coup for the app. It’s more like a bulletin board of images than a neatly stacked pile, which has a certain aesthetic appeal to it. UI issue will probably be some of the first kinks Color works out in its already promised upgrade.

Now, it’s important to get this criticism out of the way because it doesn’t have very strong legs to stand on: Not enough people are using this yet for it to work like it’s supposed to. Over the course of 24 hours, our photo stream was limited to the same handful of users in our proximity…and one of them works down the hall. It would be interesting (and yeah, sort of creepy) to see the goings-on of various strangers in your vicinity, but not if it’s the same five people. Especially since they’re all within the same office building or apartment complex. The idea of seeing someone in the elevator who says “Hey I recognize you from Color!” is pretty harrowing.

Of course, if this thing really takes off like it’s supposed to and lives up to its $41 million potential, the rotating faces and photos would get exponentially more interesting.

The one thing this app’s developers have nailed is the technology. It utilizes a patent-pending Multi-lens function which uses proximity algorithms to find other smartphones in your area using the app. Since that’s the entire idea Color is based on, of course it should work, but it was still impressive seeing photos of the view from the opposite side of our office’s tower.

Color’s potential seems huge. At the very least, it’s an intriguing concept, and at most we’ll have to agree it’s a revolutionary (albeit creepy) one. If you felt pretentious uploading your mundane images to Facebook and Twitter, at least in those cases you’re being judged by people of your choice. With Color, you don’t have a ton of control over who sees what – and whether or not that’s a good thing is a matter of opinion.

What is Twitter Blue and is it worth it?
What is Mastodon? Here’s why everyone’s talking about this Twitter alternative
Twitter’s SMS two-factor authentication is having issues. Here’s how to switch methods
Twitter has reportedly suspended signups for Twitter Blue
How to use Twitter Advanced Search
Twitter to start charging for verification mark, reports say
Having trouble accessing your Instagram account? You’re not alone
Elon Musk considers bringing Vine back from the dead
Staying on Twitter? Here are two ways to make it easier
Elon Musk now Twitter CEO after firing entire board
Twitter Blue is losing Ad Free Articles and Musk’s latest tweets indicate further changes
Clear Mode on TikTok: Here’s what it is and how to use it
Twitter’s edit button could soon be free for all users