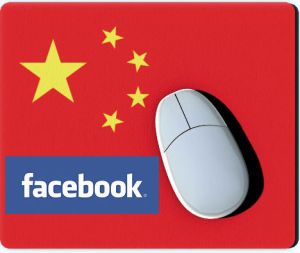 Facebook has been blocked in China since 2009, when riots in the country’s Xinjiang region led to severe crackdowns on Internet use. Since then, statements from Chinese officials and Facebook CEO Mark Zuckerberg have hinted at the possibility of cooperation between the two, if a compromise between the nation’s overbearing censorship and Facebook’s “openness” can be reached.

Now it looks as though… something is going on. What exactly that may be is still up in the air, but numerous reports say Facebook is working with China to come up with a solution. According to Marbridge Consulting as well as a few blogs, a post on Sina Weibo from Hu Yan Ping, the founder of a Chinese market research firm claims that Facebook will be collaborating with Baidu to build an entirely new social networking site. Ping wrote, “Facebook really is about to enter China, the agreement is signed. A domestic website will work with Facebook to create a new site. This new site it not interlinked with Facebook.com. Will this live or die in China?”

It’s a legitimate question. Chinese blogging and social media services are becoming increasingly popular, even internationally. If Facebook (or a Facebook-led production) wants to make an impression in the country it needs to move fast. So what exactly would this new site, or even Facebook, have to compete with?

Sina Weibo is China’s version of Twitter and has Sina, the largest Chinese web portal, behind it. It’s been around since 2009, but skyrocketed to mass popularity within the last year, reaching well past 100 million users. It’s also well-used among the celebrity set. According to Bill Bishop, who analyzed the site last month, “it is a better designed and more stable product, and Sina’s product roadmap appears to have it heading towards a robust SNS, almost like Facebook.” Sina Weibo combines elements of many popular social platforms, including polling, group buying, and applications.

It’s currently moving over to a new doman, Weibo.com, and rumored to be looking at an initial public offering.

Tencent is most well known as China’s largest Internet company, and has recently decided to capitalize on that moniker by introducing new social networking services. The site offers social gaming, networking, and instant messaging, and is hugely profitable. Its social networking platform specifically is called Qzone and runs the full gamut of social applications, including blogs and photo sharing. It is arguably the world’s largest social network and claims to have more than 200 million users.

Another extremely popular social service is Renren, which has been around since 2005. It’s the most similar to Facebook among its Chinese competitor sites, and includes many of the same applications (like Places, Groups, etc). Its UI is almost the most familiar to Facebook’s, and just like its western counterpart, it has found a following among college students. It claims to have somewhere between 150 and 160 million users, and exists with an open platform allowing outside development and integration.

Topics
How to undo reposts on TikTok (and why you should)
Twitter’s downfall made me look for alternatives, but they just made it worse
How to block people on Snapchat
How to post a Short on YouTube
What is Twitter Blue and is it worth it?
Twitter closes offices as ‘work pledge’ deadline passes
What is Ambient Mode on YouTube?
What is BeReal?
How to delete a BeReal post
How to use TikTok’s voice changer
Twitter attempts to sort out verification system with new badges
Hive Social is my favorite Twitter alternative, but that’s not saying much
Elon Musk meets Apple’s Tim Cook to settle dispute