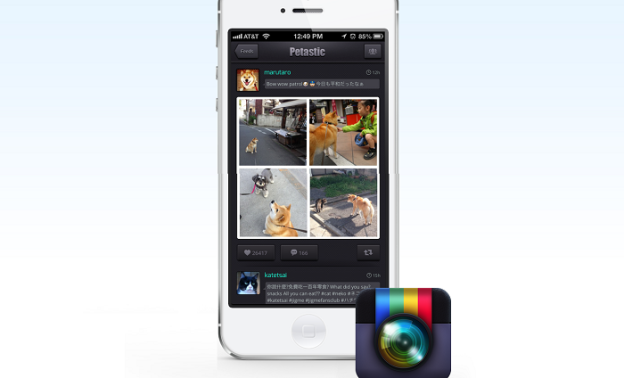 Those of us who have fallen in love (and obsession) with Instagram see the world a little differently – through Amaro and Mayfair filters, actually. Anything and everything can be transformed into a work of art with the app. It’s made us constantly document our surroundings and lives with the app; our fingers hovering over the icon, ready to snap.

But just because you can turn something into an Insta-piece of artwork doesn’t mean you should. There’s also the act of appreciation the content flowing into Instagram instead of just creating it. A new service called Instafeed want to help us start curating and collecting the images in Instagram in a new, more editorial way than the app currently allows.

InstaFeed – which debuts today on iOS – wants to change change the way people look at Instagram, by encouraging users to curate and share photos that inspire them rather than just photos they take. InstaFeed gives Instagram fans more options when it comes to consuming photos published on the platform. So look up from that camera icon for a second, folks, and see what’s happening in the Instagram world around you before taking yet another picture of your breakfast. Because guess what: There’s some amazing stuff in there.

An intro to InstaFeed

You sign up for InstaFeed using your Instagram account, but instead of posting pictures, you can look up pictures of things you’re interested in – in this way, it’s more similar to Pinterest than photo-sharing apps. Right now Appiphany, the developer, is focusing on perfecting the app for iOS before taking it to Android, so it’s only available for Apple users at the moment. Appiphany made a few pre-curated lists, so if you want to only see pictures of really cute animals, they have a feed that picks up on selected puppy-and-kitty based Instagram profiles. Currently, InstaFeed’s pre-made list topics include sports, celebrities, musicians of many genres – and they plan to add more each week. You can also make custom lists, so if you want to just see pictures of Lady Gaga, make a list with Gaga and her admirers on it.

“We’ve gone through the Instagram network and vetted some very high quality content producers in certain categories and interests and pre-populated some feeds with those users,” he explains, outlining how the team curated feeds based on different interests, like fashion. And these feeds aren’t set in stone – if you find a user you like on Instagram, you can add them to one of the pre-curated feeds. So if you like the fashion feed but wish Alexa Chung’s photos were a part of it, you can just add her to the existing content.

If you want to comment on a picture, you don’t have to switch over to Instagram – when you comment or like a person’s photos, it appears on Instagram as well. This means you can make feeds about things you’re interested in, as well as feeds that feature just select Instagram users. Similar to Facebook’s lists function, now you can make a feed of just your family members, or just your high school friends.

Right now, if you like a user you see on InstaFeed and you want to see what their Instagram account looks like, there’s no integration that will take you directly to their page, so you’ll have to open Instagram separately to look them up. But Corsaro said this type of functionality is something InstaFeed wants to pursue in the future. He said prospects for tighter integration looked good, noting that the Instagram API is very open, and that InstaFeed was already given the functionality to comment directly to Instagram – integration that tight is somewhat unusual for apps that complement Instagram.

From creators to curators

If you’re a casual Instagram user who occasionally takes pictures of your dog, don’t expect the pup to end up in the animals section; Instafeed’s pre-made lists only take photos from users they’ve selected to have superior and highly specific content. “For pre-curated feeds we are really diligent about keeping a singular focus,” Corsaro says. But just because your odds of becoming Insta-famous are lower, you can still end up in custom feeds. “If someone, say, your cousin, wanted to create a feed with you in it, they could.”

InstaFeed selects most of the users who make its pre-curated lists from official accounts or very high-profile accounts with hundreds of thousands of followers. “We actually looking to partner with folks as we launch categories in the future,” Corsaro says. Appiphany hopes that featured users eager for more fans will eventually help promote their app.

InstaFeed encourages Instagram users to share content that isn’t originally theirs; it gives you the ability to select a photo from the pre-curated lists and re-post it from your account on Instagram. This may not jive with people who get angry about others re-posting their photos without proper accreditation, and it definitely aligns Instagram more closely with Pinterest – where users are constantly “re-pinning” other people’s work – than with Facebook, where most of the pictures people post are their own.

This is by far the most fascinating part of InstaFeed. It wants to shift the focus of Instagram away from content creation and towards content aggregation. Will users respond? Many people already re-post photos they didn’t take, from inspirational quotes to lavishly-livin’ snapshots. InstaFeed just makes it easier to do so, and condones it. If InstaFeed takes off, it could substantially change the way Instagram users view their content, making it less personal and more communal.

Topics
Video-editing app LumaFusion to get a Galaxy Tab S8 launch
How to delete a BeReal post
What is BeReal?
What is Ambient Mode on YouTube?
What is Twitter Blue and is it worth it?
Elon Musk now Twitter CEO after firing entire board
Twitter Blue is losing Ad Free Articles and Musk’s latest tweets indicate further changes
Clear Mode on TikTok: Here’s what it is and how to use it
Twitter’s edit button could soon be free for all users
Instagram to soon let creators make NFTs and sell them to fans
Elon Musk to cut half of Twitter workforce, report says
Twitter reportedly plans to enable Edit Tweet for everyone this week
Twitter to start layoffs on Friday, internal email reveals