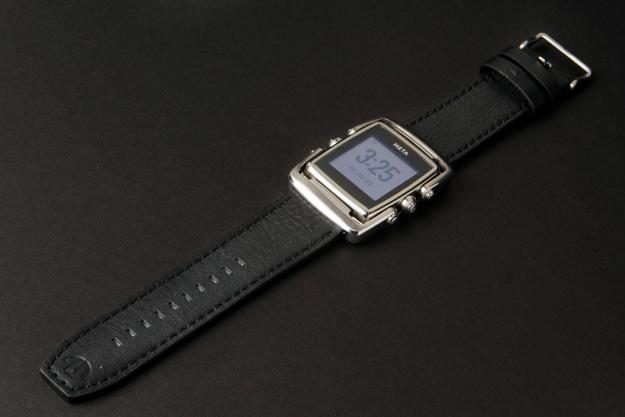 “Meta’s M1 Core smartwatch is worth considering if you value style over price, but let’s be clear: this is a Pebble that costs more than a full-fledged smartwatch.”

Do you like the the Pebble Smartwatch for its Android and iOS compatibility, its ability to deliver text notifications to your wrist, and its multi-day battery life, but hate it for its plasticky shell and straps? Are you underwhelmed by the look and feel of the Pebble Steel? Do you crave a smartwatch that emphasizes aesthetics over function?

Then Meta’s M1 Core, with its swooping steel hardware and luscious leather band might just be for you. It does a decent job of delivering notifications to your wrist without looking like a low-priced throwaway gadget. And battery life (which consistently lasted about five days in my testing) even edges out the Pebble by a bit.

But unless you’re in love with the M1’s looks, there are several better smartwatches that deliver more functionality for less money. The M1’s low-resolution screen also makes text look blocky, and despite the fact that the watch doesn’t actually do a whole lot, it can be confusing to navigate, thanks to a completely unnecessary six buttons.

The Best thing going for the Meta M1 are its looks. They won’t appeal to everyone, but the company’s founders came from the watch company Fossil, and M1’s chunky silver steel hinges and frame certainly look like something you might find on a traditional watch of that ilk.

The $300 M1 Core model that I tested also has leather straps that feel flexible and comfortable out of the box. But if you’re looking to spend a little less, you can shave off $50 by opting for rubber watch bands in one of three colors. A model with a gold face and blue leather straps is available for $400, and a black stainless steel edition is the priciest variant, currently available for $450.

Worn on the wrist, the M1 Core definitely feels more like a fancy connected timepiece than most other smartwatches. And at 11 ounces, it also has a heft that you’ll notice you’re not used to wearing a large watch.

TM1 Core definitely feels like more of a premium timepiece than other smartwatches.

While the M1’s build quality and materials impress, the screen could definitely be better. I’m fine with the fact that there’s no touchscreen or color here, because that translates to long battery life and makes the watch easy to read during the day. At night, though, the backlight, activated by pressing the upper-left button, is weak and runs only along the top of the watch face. This makes it hard to actually read the time in the dark with some watch faces. The viewing angle of the screen when the backlight is lit is also pretty narrow.

Worse, the screen’s 128 x 128 resolution is lower even than the Pebble’s (144 x 168), and the M1 uses tiny fonts for notifications, so text looks noticeably blocky. Many of the watch faces look choppy as well. If you’re into retro gaming, you might like the look, but considering the M1’s other obvious attempts at sleek aesthetics, the screen is the watch’s weakest design element.

Too few apps, and way too many buttons

The Pebble smartwatch’s user interface manages to be fairly intuitive with four buttons, even when you start downloading and installing extra apps to add functionality. With the M1, there is no app store; you’re stuck with the built-in watch, weather, calendar, music player, messenger, and timer apps (and eight mostly uninspired watch faces).

As such, the M1’s six buttons, three along each side, feel excessive and confusing. The upper-left button activates the backlight, and the left lower button is a nebulous “menu” button that basically backs you out of all the apps to give you a scrollable look at them all as tiny icons. The other three buttons, one on the left and three on the right edge, function as four-way navigation buttons. Navigating the watch isn’t that complicated, and I did get used to the layout after a couple weeks. But there’s no doubt that you could more easily access all the M1’s features with fewer buttons and better UI design. Really, the six buttons on the watch seem to be there more for design symmetry than for smart function.

Simple setup, and a plethora of notifications

Setup with my Galaxy Note 4 went about as expected. I grabbed the Meta app from Google Play, and it first asked me to pair the M1 in standard Bluetooth fashion. Strangely, the watch didn’t expressly tell me to enter “0000” to pair, but the app suggested either that that or 1234, and the former worked every time, pairing the watch without a problem.

Notification text is readable, but small, and it definitely isn’t pretty.

Next, you head to the app’s “Meta Filter” tab and choose which apps can send notifications to the watch. I’m not entirely certain, but it seems like every app installed on my phone was listed here, including plenty that I’m quite sure don’t even produce notifications.

Still, it’s easy enough to scroll through the long list and select your email and social media apps, along with whatever other apps you’d like to let shout messages to your wrist. Once that’s done, the Meta M1 should start delivering messages as expected.

As for how they’re delivered, there’s some good and some bad. For starters, the watch’s vibration isn’t as strong as the Pebble’s, perhaps because the motor is encased in a heavy metal frame. I found myself occasionally missing notifications because I didn’t feel watch buzz. And sometimes I thought I felt a notification, only to look at the watch and not see one. Again, you’ll get more used to this over time, but if you’re coming from a Pebble, you’ll miss its stronger buzz.

For those who actually like to read emails or long text messages on their watches, it’s worth noting that the Meta M1 can display six lines of text on the screen. But remember what I said about the resolution being only 128 pixels square? Now imagine how small and blocky six lines of text are on a screen that’s just under an inch on each side and only has about 16,384 pixels.

Notification text is readable, but small (you may have to squint), and it definitely isn’t pretty. Picture the text on the cut scenes of 80s Nintendo titles, and you get the idea.

Much like Samsung’s recent smartwatches, the Meta M1 charges via a small proprietary connector that clamps to the back of the watch and has a standard Micro USB connector on one side. The good news is that you can use a standard cable. The bad news: the charger itself is small enough that it could be easily lost, even in a bag with more a few deep pockets. And should you lose it, you’ll likely have to get a replacement directly from the company. Google and Amazon searches didn’t turn up any M1 chargers.

There are several better smartwatches that deliver more functionality for less money.

Aside from its premium build, battery life is the M1’s best feature. The company claims you’ll get 5-7 days between charges. Some reviewers have gotten much less than that. But it all really depends on how many notifications you get. Enable every app on your phone to send messages to the M1 and you’ll probably get 3-4 days. But I found I was consistently getting right around five days between charges with Gmail, Twitter, Facebook, and text message alerts enabled.

Even if you only get three days between charges, that’s still at least a day better than most color-screen smartwatches. And I actually found the Meta M1’s longevity to be just a bit longer than my Pebble, which usually alerts me that it needs a recharge early on the fourth day of use.

The Meta M1 Core isn’t the most well-designed or versatile smartwatch. But if all you want is the ability to read notifications on your wrist, and you care more about premium materials than the sharpest screen or the most functionality, it’s not a bad option.

We’re happy to see seasoned watchmakers get into the smartwatch game and push aesthetics to the forefront. But with its limited functionality and high price, the M1 will likely remain a niche device, especially as Android Wear watches seem to be getting better fast, and Apple’s Watch should also be hitting store shelves soon.

What we’d really like to see is a company like Meta or Fossil team up with Samsung, LG, or Apple, and work as equal design partners to deliver a wrist-worn device that both looks and feels like a premium timepiece, but that also delivers the functionality and app selection of the best wearables available. The Meta M1 delivers style, but it doesn’t have the function to back it up.