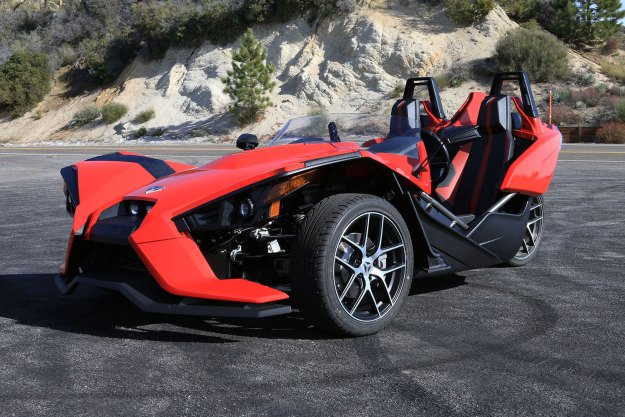 “The Slingshot is the most fun you can have on three wheels.”

To gaze upon the Slingshot for the first time is – for most people anyway – a combination of awe and confusion. Even lawmakers still aren’t sure what to make of this reverse trike that hails from a company normally associated with snowmobiles and ATVs.

But this love child of a motorcycle and a sports car starts to make a lot more sense with closer inspection. With the absence of a roof, doors, and nearly anything else that isn’t essential to the operation of the vehicle, the Slingshot sports a curb weight that makes the Lotus Elise look like a fatty. And while it’s far from being the most pragmatic way to get around, it’s hard to deny the fact that this three wheeler offers one of the most compelling fun-per-dollar propositions currently going.

The oddball Slingshot Sports a 2.4-liter four cylinder power plant that sends all of its grunt to a single rear wheel by way of a five-speed manual gearbox and a carbon fiber-reinforced belt drive. The folks from Polaris say that the impetus to create the Slingshot came from their desire to build a vehicle that could cause a “paradigm shift” in the automotive market. While that certainly has the air of PR hyperbole, it’s not unlike the motivating factors behind the Cam Am Spyder from a few years ago (which is also a reverse trike), and the Slingshot is arguably more successful at that mission.

The Slingshot proved to be surprisingly comfortable for a high performance-focused vehicle.

Unlike the Cam Am Spyder, you sit in the Slingshot rather than on top of it. This, along with the Polaris’ side-by-side seating configuration, traditional steering wheel, three pedals on the floor and a shifter in the center console, makes the experience from behind the wheel feel more like that of an open cockpit car rather than a motorcycle.

It also makes acclimating to the Slingshot a surprising easy process, even for those who lack any seat time at the helm of a motorcycle. I would consider myself part of this group, as aside from a brief stint on a dirt bike in my childhood, sliding in behind the wheel of this trike for the first time constituted my introduction to the realm of motorcycles.

Despite my lack of experience, commanding the Slingshot felt immediately familiar due to the traditional road car-style input methods. And before buckling the seat belt and setting off, one might be forgiven for wondering why you wouldn’t simply opt for a sporty convertible rather than this far less practical option. But after firing up the engine and setting off on my first journey at the helm, it became immediately clear that such comparisons are pointless.

The Slingshot’s tubular steel frame, minimal bodywork, and bare-bones cockpit not only contribute to its 1,700 pound curb weight, they also allow it to retain much of the experience of riding a motorcycle. The windscreen provided on the top-spec SL model does help deflect insects and random debris from meeting your helmet, but otherwise it’s very clear that you’re outside while in the Slingshot – you see, hear, and smell everything around you at all times. While modern road cars seek to isolate the driver from the outside world, this trike offers the exact opposite experience.

It’s a sensation that cuts both ways though, as driving the Slingshot at speed is a joy on a twisty back road like Angeles Crest Highway, but can also be fairly disconcerting when jockeying for position with 18-wheelers on the freeways around LA.

The Slingshot’s performance is also something of a double edged sword. The trike’s Ecotec mill generates 173 horsepower and 166 pound-feet of torque, and it’s more than enough grunt to make the Polaris a thrilling experience when you dip into the throttle – especially since the exhaust system’s bark is only being filtered from your ears by your helmet.

But with all of that power being routed to one contact patch, lighting up the back tire is such an effortless proposition that it occasionally works against the Slingshot. At low speeds in first or second gear, dipping halfway into the throttle is all that’s really required to send the rear tire into a frenzy. While this makes for endless entertainment when all you’re after is hooning around like a maniac, it’s less desirable when you’re looking to pass some slower vehicles on the road and you’re not sure whether or not you’re going end up careening sideways into oncoming traffic.

It’s worth noting that Polaris provides defeatable traction control on the Slingshot as standard, but its threshold is fairly high. The rear tires would still happily spin into smoke whenever horsepower outmatched grip, regardless of whether or not traction control was enabled. As a result, attempts to lay down quick 0 to 60 mph sprints proved to be an exercise in restraint rather than courage.

While rear end grip might be a bit lacking, the Slingshot’s handling is impeccably tuned, effectively balancing responsiveness with ride compliance. The front independent suspension is paired with a swing arm out back that soak up bumps at highway speeds and maintain a reasonable level of comfort around town, while electronically-assisted steering rack is well weighted and responds to inputs with immediacy and precision that prevents things from ever feeling lethargic.

Along with the Slingshot’s remarkably comfortable vinyl seats – which offer horizontal and backrest adjustment – the three wheeler isn’t as punishing on long treks as you might expect, and it will happily lope around in fifth gear at about 2300 rpm at highway speeds. While I wouldn’t call it a grand tourer by any stretch of the imagination, the Slingshot proved to be surprisingly comfortable for a high performance-focused vehicle that has more in common with an Ariel Atom than a Toyota Camry.

The Slingshot is one of those motoring experiences where its inherent strengths can sometimes serve as weaknesses, and vice-versa. Prices start at $20,000 for the base model and top out at about $25,200 for an SL model like this one, which includes larger forged wheels and tires, a windshield, and an audio system with a 4.3-inch color screen and backup camera. When compared to its two-wheeled brethren, the Slingshot is going for high-end Ducati money, and the latter offers performance that’s on an entirely different level.

However, when stacking up the Slingshot against road-going offerings of the four-wheeled variety, there just isn’t a car on the market that offers a driving experience anywhere near as engaging as the Slingshot in this price range. And no automobile (with perhaps the exception of an open cockpit formula racer) can provide the same visceral feeling of connection to the road and the outside environment like the Slingshot does.

While those attributes do have their occasional drawbacks, the moments where everything works more than make up for it.