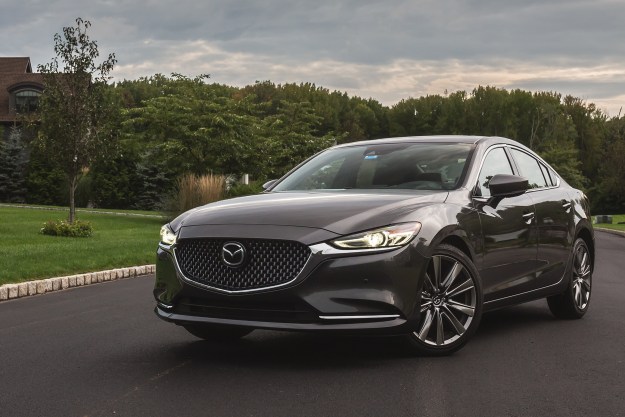 “With revitalized zoom-zoom power, the turbocharged Mazda6 is a sporting star in an unlikely space.”

When the current, third-generation Mazda6 first arrived in 2012, it immediately captivated us with its all-around high-class styling, superb driving dynamics, extensive standard options list, and modest pricing. As a package, it set another bar as to how much car you can get for your money in a mainstream automobile.

The Mazda6 has always stood out as one of the three top choices among the hugely competitive midsize sedan crowd. Its rivals include the Honda Accord, Toyota Camry, Kia Optima, Hyundai Sonata, Nissan Altima, Chevrolet Malibu, Ford Fusion, and the Volkswagen Passat.

There was one major setback that really kept the Mazda6 from becoming king, however. It only came with a 187-horsepower, naturally-aspirated four-cylinder engine. Buyers could choose between a well-tuned six-speed automatic transmission or a six-speed manual. The 6 it was still outgunned by the competition offering six-cylinder power or, at least, the option of a more potent turbocharged four.

Since launch, Mazda hinted at the arrival of more power and, after what seemed like eons, it finally delivered with the CX-9 crossover a short time ago. Naturally, the new turbo four joined the Mazda6 lineup as an option. Does the extra oomph give the Mazda6 the advantage it needs to take the midsize family sedan crown? Was it worth the wait? Oh yes, yes it was.

The Mazda6 typically starts at $23,000 and to get the new turbo four, one will have to spring for the third-tier Grand Touring model with a sticker of just $29,200. Our fully-loaded Signature tester stamped the final invoice at $34,750.

The Mazda6 sedan might be from 2012 but thanks to its polished, future-proof styling, product designers only casually updated minor details to keep it feeling fresh. The main cluster gets finer backlit fonts while analog gauges replace the old LCD screen. Backwards that might seem, but the end result is a more refined and upscale layout. The center stack and HVAC panel benefit from a cleaner redesign. And the UltraSuede trim and supple Nappa leather festoons the interior with the ambiance of a car that costs way more than the sticker price.

Of course, there’s adequate space for five adults and their things. And the tech list remains just as extensive to keep them comfortable, safe, and occupied. The list includes dual-zone climate control, heated and cooled front seats, navigation, and a rather good-sounding Bose premium sound system. The safety list also keeps up with the Joneses with features like blind-spot detection, forward collision warning with automatic braking and pedestrian detection, lane-departure warning with lane-keep assist, and radar-guided cruise control.

Though since the core design remains largely unchanged, the interior does feel a little bit long in the tooth if one starts nit-picking. The BMW iDrive-like dial and mediocre processing speeds within the infotainment make the interface and interactive experience feel a bit last-generation.

As a whole motoring experience, the Mazda6 turbo is absolutely sensational to drive and even to look at.

And, when using the 360-degree parking camera, we were disappointed at how surprisingly low-resolution the views seemed. This is particularly obvious when compared to the newer systems in the latest Honda Accord and Toyota Camry. Also, the system didn’t like the twilight produced on rainy nights as any water droplets on the camera lenses rendered them useless.

However, these are minor criticisms because despite feeling like a dinosaur, the Mazda6’s interior ages gracefully and delivers accordingly.

With a direct transplant from the CX-9, the Mazda6 finally gets much-needed bragging rights under the hood. The 2.5-liter SKYACTIV-G four-cylinder boasts 250 turbocharged horses, bolstered by a whopping 310 pound-feet of torque. Unfortunately, diehard enthusiasts will decry and protest the lack of a manual. But the six-speed automatic is finely tuned to perfectly match the engine’s powerband.

The rise of downsized, turbocharged four-cylinders in place of naturally-aspirated six-cylinder engines might be formulaic. But in the Mazda’s case, the turbo-four is a good replacement for displacement. That’s because there’s a mountainous amount of torque available right from the get-go.

Typically, there would be a significant delay in power delivery before reaching peak output, which is what we’d call turbo lag. The engine’s fancy dynamic pressure turbo renders that lag factor virtually nonexistent. Mazda says it peaks at 5,000 rpm. But it comes on so quickly that, if you ignored the muffled lawnmower exhaust note, you could easily think there’s a much larger engine hidden under the hood.

The Mazda6 always stood out as one of the top choices among the hugely competitive midsize sedan crowd.

Since it’s still a compact four-cylinder, just with a clever turbo slapped on it, the Mazda6’s front end remains light. There’s no mucking about: the Mazda6 turbo is a real hoot to drive. Turn-in is incredibly sports-car like with superb chassis tuning and body control, all thanks to that clever G-Vectoring Control system that surfaced in 2017. Whenever the road was anything but straight, the Mazda6 behaved as balanced and composed as a rear-wheel drive sports sedan, just without the tendency for oversteer. And thanks to the same clever technology, along with some fancy trickery with the front suspension, torque-steer is virtually nonexistent, even right off the line and with the gas-pedal planted.

For the daily routine and errand runs, the Mazda6 settles down with an exquisite ride unbothered by the crater fields that New York City and New Jersey call roads. It’s pretty fuel efficient too, with the on-board computer reporting an average of around 25-26 mpg in week’s mix of spirited city and highway driving.

Notable criticism includes the sensitivity of the automatic braking system that’s part of the forward-collision mitigation technology. The system seems a bit touchy, especially for those New York City-style quick lane changes. One instance upset the Mazda6 and a fellow motorist behind, heavily applying the brakes unnecessarily and automatically during a changeover to a lane with a clear forward line of travel. And, there is a bit of tire roar when the pavement surface gets rough.

All Mazdas come with a three-year, 36,000-mile basic bumper-to-bumper warranty and a five-year, 60,000-mile policy for the engine and transmission. For the 2018 J.D. Power Vehicle Dependability Survey, Mazda placed just one spot above the industry average of 142 problems per 100 new vehicles produced and sold, ranking with 144 problems. That’s a significant improvement over the 2017 survey, where Mazda ranked lower in quality with 166 problems per 100 vehicles. This represents an observable increase in vehicle reliability and dependability.

Although our tester came fully-loaded in top-spec Signature form, we would take the Mazda6 one-step below in Grand Touring Reserve trim stickered at $31,700. That still pretty much checks all the options boxes for the stuff that matters, such as heated and cooled seats, sat-nav, the premium Bose Centerpoint audio system, dual-zone automatic climate control, and all the passive and active safety gear.

All that seems to be absent in the lower spec-model is the 360-degree parking camera — which didn’t quite justify its premium — and the front and rear parking sensors — which aren’t really necessary since the Mazda6 is easy to maneuver and see out of. We’d take the extra savings for a weekend getaway up to a place with lots of empty, twisty roads.

The zoom-zoom factor returns for Mazda’s bread-and-butter midsize sedan, putting it at the front line of the battlefield with the rest of the more powerful competition. But the hike in power isn’t just boost to brag about as it’s also extremely well-executed.

The addition of the turbocharged-four does nothing to disrupt the Mazda6’s already beloved driving experience, excellent packaging, and suave styling. But it does everything to round out the experience we were all hoping for and expecting from the inclusion of a more powerful engine.

Now, it only falls short by the tiniest of margins because, when compared to the renewed competition, the Mazda6 does seem to feel a bit early 2010s. Despite its age, the Mazda6 is still compelling enough as a package to be able to tie itself with our Editor’s Choice, the Honda Accord Sport. It’s not the fastest, the newest, and the most technologically advanced. But as a whole motoring experience and a package, it is absolutely sensational to drive and even to look at. So, it really is a matter of splitting hairs.

If you’re on the hunt for the latest and greatest, the Nissan Altima is about as fresh off the press as you can get in the segment. The latest Kia Optima received its overhaul in 2015, while its cousin, the Hyundai Sonata, received an update in 2017. The Chevrolet Malibu surfaced just in 2016 and Ford’s aging Fusion is simply going the way of the dodo very shortly. All are great choices, but the Mazda6 really zoom-zooms itself into the top three places in its niche.

Slightly archaic interior feeling aside, the Mazda6 Turbo should serve excellent duty for the near-future. It’s so compelling as a package as one of the finest midsize sedans money can buy — this side of the luxury market — it stands to last a very long time. As of recent, Mazda added Apple CarPlay capabilities in addition to Android Auto to make sure it’s compatible with the latest smartphones.

If it wasn’t for the Mazda6’s age at this point, it would, easily take the crown as the best car in the segment. For the latest and greatest, the Honda Accord, Toyota Camry, and Nissan Altima will check chose boxes. But if you’re ultimately looking for one of the best all-around packages in the seas of middling family sedans, the turbocharged Mazda6 delivers a perfectly balanced feeling that even the new competition can barely top, both from behind the wheel and on the outside.