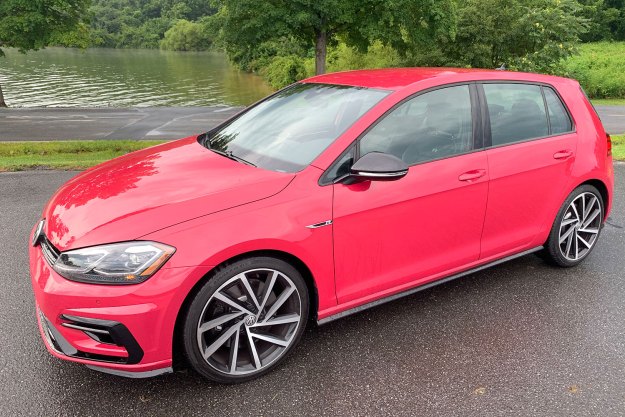 “The VW Golf R's refinement is worth its premium.”

Of all the Volkswagens we were set to test this year, the 2019 Golf R was the one we were most eager to take for a spin. It is arguably one of Volkswagen’s top offerings at the moment and includes all of Volkswagen’s great driver assistance technology, as well as a stunning digital cockpit. Also standard this year is Volkswagen’s great dynamic chassis control, which allows the driver to truly customize how the car handles and drives.

There’s only one trim level this year, with a starting price of $41,290 ($42,390 for the direct-shift gearbox automatic). That means you’ll only need to decide on the color you want. We had hoped Volkswagen would bless us with a loan of a “Spektrum” R – a $2,500 option that allows you to paint your car in one of 40 different custom colors – and the automaker didn’t let us down.

When the car appeared, we were told it was “Raspberry Red” — uh, no Volkswagen, this is pink. After getting used to the shock that we were about to rock a pink car for the week, we got down to business. And thank goodness for the car’s great handling, 288 horsepower,and 280 pound-feet of torque — it seemed like we needed them at every turn with this one, and the R responded.

At least we know the safety features work

A good portion of our driving took place on the first day – as did a good deal of the excitement, good and bad. Early on, we spent a lot of time testing out the built-in safety functionality – without realizing we were actually going to need it in a real-world situation.

Less than four hours after we got our hands on the car, we were coming off the highway to make a left turn and very nearly got T-boned by a driver racing through the intersection to avoid a red light. While the car didn’t approach close enough to set off the obstacle-avoidance sensors, the torque of the engine allowed us to stomp on the gas to avoid a collision. This engine sure has a LOT of giddyup.

Unfortunately that was just one of several close calls.

Later that day, on a trip home from work, the R’s safety capabilities were again tested. This time, it was somebody who didn’t use a turn signal to change lanes on the highway. This near-miss did set off the warning sensor, and some quick action on our part along with responsive steering kept us out of danger. Thank you, Volkswagen.

Our near-collisions aside, we appreciated the lane assist and blind spot monitoring. Lane assist was especially noteworthy, as the vehicle’s system worked quite well to keep us in our lane on the highway. As the car approached either side of the lane, the car corrected the steering to stay within that lane. If you’ve never driven a car before with this, your next one needs it. Competitors such as the Veloster N and even the Subaru WRX have lane assist options as well.

Add in adaptive cruise control, which was able to safely maintain space between us and the vehicle ahead of us, and we walked away quite impressed with the R’s package of safety tech which all but let the car drive itself. While these features are not limited to the R – every vehicle in VW’s lineup offers it at some trim level now – it makes a great car even better. One thing we did notice is that the lane assist was sometimes confused by larger potholes and/or uneven or patched roads with lane markers. This occasionally led to some unexpected and unpredictable behavior, so be forewarned.

While the two previous incidents already has us thinking Volkswagen was going to get their car back in pieces, our time behind the wheel was fated to test us more.

Neither rain, nor floods, nor cruddy roads

If you live in or have been through Pennsylvania recently, no doubt you’ve been blessed with the wonderful weather (read: Noah’s Ark) we’ve been having, which has been made oh so much better by roads that seem like they have more craters than the surface of the moon. Of course, one of those deluges came during our testing.

One of our favorite things about all-wheel drive hatches and sedans is how they handle. Thanks to physics of a low center of gravity, you’ll have a whole lot more fun whipping one of these around in bad weather than any SUV or truck.

Of all the Volkswagens we’ve tested this year, the 2019 Golf R was the one we were most eager to take for a spin.

Indeed, during the worst of these torrential rainstorms, at no point did we ever feel like we were driving the R beyond its limits. The 4Motion feature is as enjoyably nimble as its Quattro brethren, delivering just the right amount of torque when and where we needed it.

This was all made better by the addition of dynamic chassis control (DCC). Altogether, there are four modes in addition to standard, including Eco, Comfort, Race (Sport In other VW models), and Custom. We found ourselves frequently turning to Comfort on our longer drives. With its silky-smooth suspension and reduced steering input, even riding on horrible roads was shockingly comfortable.

But race mode was more fun just about everywhere else. The suspension becomes much firmer, and steering became infinitely more responsive. Another plus? It uncorks the engine a bit, giving this 2.0T R a sound closer to that signature obnoxious growl of R32s past.

Regardless of whatever was thrown at it, the R handled it and positively begged for more. It still suffers from the same issue as the GTI when it comes to clutch and shift travel – we think the R especially needs less of both, but we dealt with it.

Fuel economy is also much lower than other VW models at 21 city/28 highway, but we were able to get as much as 30-32 mpg on some of the longer, more leisurely drives. This isn’t a Prius, and if you’re reading this, you’re probably not seriously in the market for one anyway.

A spartan, yet future-forward interior

Regardless of the power under the hood, it’s still a Volkswagen, and the R wins no awards for interior design. Still, the seats are leather and surprisingly comfortable for its class, while LED lighting is standard throughout. Where the interior really wows, however, is the combination of the large 8-inch touchscreen and Volkswagen’s new digital cockpit.

Where the interior really wows is the combination of the large 8-inch touchscreen and Volkswagen’s new digital cockpit.

While the layout isn’t as streamlined as what you’ll find in the higher trim-level 2019 Jettas, where both features are placed at the same level and seem to flow into each other, it’s not any less useful. We liked focusing on the map – which when combined with SiriusXM’s TravelLink allows traffic information to be right in front of you. While we didn’t experience it during our testing, we do know from our time with other VWs with TravelLink that drivers will get audible cues to traffic issues ahead.

At the end of the day, the Golf R is still a small car so there isn’t an awful lot of headroom and legroom in the back, but there’s enough for a full-sized adult male to be comfortable, at least on shorter trips. This complaint is also true of the Civic Type R, but not of the WRX STI. We only had two other issues with the interior – awkward placement of the window controls on the doors (it needs to return to the upper parts of the handle) and a too-deep USB port that makes it tough for people with large hands to plug in a USB cord.

Sharp exterior has some issues

On the outside, the R looks pretty much like the GTI, save for some small changes to the front fascia and other minor styling differences. We were big fans of the auto-leveling headlights which swivle into the turns and provide additional side illumination on sharper bends. The LED headlights and taillights are bright, and it looks a tad sportier than the GTI thanks to being about a half-inch lower.

The Spektrum paint colors we’ve seen in the wild are stunning, including ours, but we experienced another issue that gave us pause about recommending this paint job. Toward the end of testing, we were apparently hit in the parking lot of a local supermarket.

We’ve had this happen to our own personal cars, but how the Spektrum paint on the R performed was a little bit concerning. The paint flaked versus scratching off, which revealed that Volkswagen isn’t painting these as thoroughly as we’d like. It’s an awfully thin coat of paint.

A service tech at our local Volkswagen dealership agreed that this shouldn’t have happened, and is likely due to too few coats of paint on the car (these vehicles are apparently hand-sprayed, thus the three- to four-month lead time). Our recommendation? Have your dealer paint the car – if they do it, that doesn’t void your warranty, and for $2,500, you’ll get a better result.

We didn’t want to see it go

Despite Murphy’s Law attempting to ruin our experience at every turn, seeing this car go still hurt. The lower-model GTI is fun to drive but there’s still that bit of roughness around the edges. The R is its refined older brother, a classier GTI if you will. It’s probably the reason why the R is selling in surprisingly big numbers to more middle-aged men, according to a salesperson we’ve talked to.

Even though it’s one of the more expensive non-luxury hatches out there, it feels worthy of its $41,000 price tag. The entire package is wrapped together nicely, and it feels very much worth its premium price because other hot hatches aren’t anywhere near as refined. You will have a ton of fun driving this, as well as a surprising amount of pleasure and comfort on long hauls.

How DT would (not) configure this car

Since there’s only one trim level, we’ll actually use this space to tell you what not to do. While yes, it’s awesome to choose your car color and, as a result, drive as close to a “one-off” as most of us ever will, the quality of the paint job itself is nowhere near as durable. Save yourself some money and have the body shop at the dealership do it and it will likely hold up much better — and not take three to four months.

If you’re a Volkswagen fan, the answer is yes. While the GTI is a fun car, the R is the whole package. We had to nitpick here to find things wrong with the car, and there’s no deal-breaking issues – just little annoyances.

Those less loyal to the brand should check it out, especially if they’re looking for something less obnoxious than the Subaru WRX STI or Civic Type R. We don’t think you’ll be disappointed.

We just pray you have better luck with your R than we did.

Topics
We need more 7-passenger EVs, but the 2023 Mercedes EQS SUV has room to improve
Lux and refreshingly livable, Mercedes’ EQE moves EVs mainstream
Tesla to fix window software on 1M of its U.S. cars
2024 Chevrolet Equinox EV aims for affordability with $30,000 base price
Uber says it’s investigating ‘cybersecurity incident’
Nvidia’s Drive Concierge will fill your car with screens
The Uber hack is an outrageous tale of a teen hacking for fun
How to watch Tesla’s AI Day tonight and what to expect
2023 Audi Q4 E-Tron first drive: the predictable and traditional EV SUV we need
Tesla AI Day 2022: Optimus, self driving cars, and everything else announced
Tesla hopes full self-driving beta will be out globally by the end of 2022
Elon Musk reveals first delivery date and customer for Tesla Semi truck
Nissan wants the 2023 Ariya to be its comeback EV, but the bar has been raised