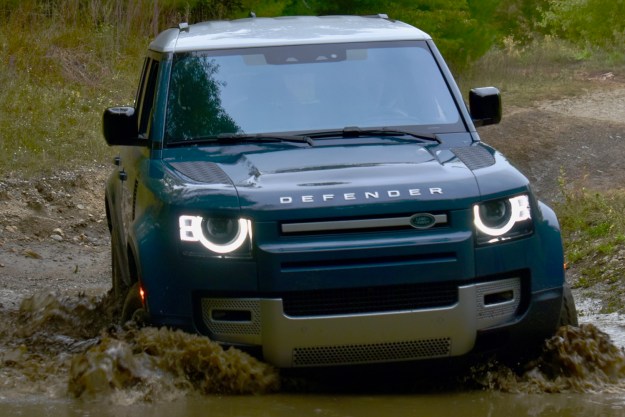 Modern Land Rover is defined by SUVs that combine luxury with off-road capability, vehicles that, despite their mud-plugging abilities, are typically compared to the likes of Mercedes-Benz. It wasn’t always this way.

When Land Rover launched in 1948, it made simple, rugged vehicles aimed more at farmers, explorers, and soldiers than wealthy suburbanites. Those early Land Rovers were Britain’s answer to Jeep, not Mercedes. As Land Rover drifted further into luxury, the Defender became the last reminder of the brand’s origins. Until it went out of production in 2016, that is (United States sales ceased in 1997).

Fans loved the original Defender because it existed in a time warp, preserving old-school simplicity as cars got more complicated. That makes the mission of the redesigned 2021 Land Rover Defender even more difficult: The SUV has to stay true to its roots, while embracing technology to appeal to a wider range of buyers.

Today’s Defender tries to split the difference between its predecessor and other Land Rover models, as well as the competitors they target. Starting at $49,900, the 2020 Land Rover Defender 110 is pricier and more luxurious than a Jeep Wrangler, but less expensive and simpler than a Mercedes-Benz G-Class. Does that actually make for a good off-roader? Let’s hit the trail and find out.

The 2021 Land Rover Defender is to the original what the J.J. Abrams-helmed Star Trek movies are to the 1960s Star Trek television show: A remix of memorable elements from the original aimed at a more mainstream audience.

The latest Defender retains the boxy proportions of the original, but with subtle changes to enhance aerodynamics. The body sides taper inward, and the corners of the body are rounded, all to help the Defender cut through the air with less effort. In this age of stricter global emissions standards, even off-road icons need to meet efficiency targets.

Under the skin, the new Defender swaps the old model’s body-on-frame construction for a modern unibody, giving it better road manners. As before, the Defender is available in four-door 110 and (for the 2021 model year) two-door 90 configurations, but the numbers don’t mean much. On the old Defender, they corresponded to the length of the wheelbase, but today’s Defender 90 has a 101.9-inch wheel base, while the 110 has a 119-inch wheelbase.

The latest Defender retains the boxy proportions of the original, but with subtle changes to enhance aerodynamics.

Like the exterior, the interior aims to balance the original Defender’s ruggedness with modern considerations. It’s down-market from other Land Rover models, but designers weren’t going for all-out luxury here. Instead of covering things up with extra trim pieces, the structure of the doors and dashboard are left exposed for a no-nonsense look. Rubberized floors and upholstery made from decitex fibers and recycled polyester are sensible choices for a vehicle designed for off-roading (more traditional leather upholstery is available on the top Defender X trim level).

The four-door Defender 110 is longer and taller than a Jeep Wrangler Unlimited and Mercedes-Benz G550, and is wider than the Jeep as well. That doesn’t translate into substantially greater passenger space, but the Defender offers more seating options. The standard configuration is two rows and five seats, but a three-row, seven-seat version is also available. Land Rover also offers a front center jump seat on two-row models, allowing them to seat six people in a pinch. The Defender 110 also has more cargo space than the Wrangler Unlimited (Mercedes doesn’t publish cargo capacity figures for the G-Class).

The standard infotainment setup includes a 10-inch touchscreen with Apple CarPlay/Android Auto compatibility. A 12.3-inch digital instrument cluster is available on all trim levels except the base model. The first and second rows each get two USB ports and two 12-volt outlets, with a wireless charging pad upfront as well. On models so equipped, the third row gets a single USB port and 12-volt outlet.

The infotainment system is Land Rover’s latest Pivi Pro setup, with Qualcomm Snapdragon processors and the Blackberry QNX operating system. This allows for quicker responses, even just after starting the car, according to Land Rover, and that did seem to be the case. The menu setup was also easy to learn, with only a couple of taps required to perform most basic functions. However, the screen needed to be forcefully poked before it would respond.

Like other Land Rover models, the Defender gets the automaker’s Terrain Response 2 system, with drive modes for different surfaces like snow, mud, or rocks, as well as an “auto” setting that makes adjustments on the fly. The Defender is also the first Land Rover to get a Wade Sensing feature, which changes vehicle parameters for fording water (maximum wading depth is 35.4 inches, in case you were wondering), shows the depth of the water on the central screen, and even drags the brakes to clean them off once you’ve driven out of the wet stuff.

The screen needed to be forcefully poked before it would respond.

The Defender also gets an array of cameras to help spot obstacles while off-roading. You can train cameras on the front tires to check clearance around rocks, or use ClearSight Ground View to “see” through the hood and get a view of what’s directly in front. The Defender also gets a video rearview mirror. Other automakers already offer this feature, which shows the feed from a rear-mounted camera in the mirror, but it really comes in handy here, as the Defender’s spare tire blocks rearward visibility otherwise.

All Terrain Progress Control acts as low-speed, off-road cruise control, handling braking and acceleration while the drive steers. It was able to drive the Defender up a steep hill on the Land Rover Experience off-road course in Manchester, Vermont. Like many other off-roaders, the Defender also gets hill-descent control, which automatically maintains a set speed while driving down hills.

For on-road driving, standard driver-assist features include blind spot monitoring, automatic emergency braking, and lane keep assist. Adaptive cruise control is standard on HSE and higher trim levels, or as part of an optional Driver Assist Pack. Land Rover and other luxury brands still refuse to make adaptive cruise control standard, despite that being the case for less-expensive vehicles from mainstream brands.

Land Rover offers two powertrain options in the Defender. The base P300 option is a 2.0-liter turbocharged four-cylinder engine, making 296 horsepower and 295 pound-feet of torque. P400 models get a 3.0-liter six-cylinder engine with both a turbocharger and an electric supercharger. Land Rover calls the P400 a “mild hybrid,” because it has a small battery pack charged through regenerative braking. Electricity powers engine accessories and provides a small power boost, but the Defender can’t be driven solely on electric power. Total system output for the P400 is 395 hp and 406 lb-ft of torque.

The P300 and P400 have more horsepower than the counterpart turbo-four and V6 engines available in the Jeep Wrangler, and the P400 also boasts more torque than the Jeep V6. However, Jeep also offers a diesel engine with 442 lb-ft of torque, and a plug-in hybrid is on the way. The pricier Mercedes-Benz G550 boasts a 4.0-liter twin-turbo V8, making 416 hp and 450 lb-ft. Nonetheless, the Defender’s 8,201-pound maximum tow rating bests the torquier diesel Jeep and Mercedes, not to mention most midsize pickup trucks.

Both powertrains use an eight-speed automatic transmission, with standard four-wheel drive. This is an off-road-ready system with a two-speed transfer case and center and rear locking differentials, ensuring maximum traction on slippery surfaces.

What really sets the new Defender apart from its predecessor—and the competition—is its on-road behavior.

Living up to its reputation, the Defender proved completely drama-free in off-road driving through the Vermont woods, tackling steep hills, rocks, mud, and, dirt without breaking a sweat. Just as current supercars use electronics to make high-speed driving easier regardless of skill level, modern Land Rovers make off-roading accessible to novices. All you have to do is steer clear of trees and let the Defender’s driver aids do their thing.

Off-road capability was a prerequisite, though. What really sets the new Defender apart from its predecessor — and the competition — is its on-road behavior. With its comfortable ride (courtesy of adaptive air suspension) and precise handling, the Defender felt more like a regular car than a mudslinging off-road SUV.

The P400 powertrain provided more than enough power for passing on the highway, and the vehicle itself felt rock-solid at higher speeds — which isn’t always the case with tall, boxy SUVs. The interior is fairly quiet as well, and the driving position is much more comfortable than the cramped, upright pose the old Defender forced on its drivers. The only blemish was somewhat vague steering.

Safety ratings from the Insurance Institute for Highway Safety (IIHS) and National Highway Traffic Safety Administration (NHTSA) aren’t available yet. That’s often the case with new models like the Defender.

Land Rover’s four-year, 50,000-mile limited warranty is comparable to other luxury brands. The Defender’s newness makes it hard to predict future reliability, but Land Rover does not have a good reputation in this area.

We’d start out with a five-seat model in the midrange SE trim level, which includes the streaming video rearview mirror and other convenience features, but with the more durable base interior trim rather than the leather of the higher trims. The SE is also available with the P400 powertrain, a box we would check.

To that base, we would add adaptive cruise control ($1,200) and the Towing Pack ($3,050), which includes the All Terrain Progress Control and Terrain Response 2 off-road driver aids. We’d also add the Explorer Pack, which includes a roof rack and lockable exterior cases for extra storage space, plus a snorkel to help the engine breath easier while fording water or in dusty conditions.

These options bring the total price to $71,900. It’s admittedly a big step up from the Defender’s $49,900 base price, but it builds a well-equipped vehicle with plenty of tech features and few frills.

The original Land Rover Defender helped define the modern SUV, but the brand and its customers have moved on. Land Rover is now a luxury brand, and SUV buyers are used to greater levels of refinement and technology than the old-school Defender offered. The new Defender is more than just another redesign. It incorporates decades of technological progress in one fell swoop.

The 2020 Defender is the automotive equivalent of a Patagonia jacket. It’s a pricey, premium item, but it offers a higher level of quality for that price. The Defender is far from spartan, but it doesn’t indulge in the decadence that makes most other SUVs from luxury brands bette- suited to shopping mall parking lots than off-road trails.

That makes the Defender a unique proposition. It’s a bit more upscale than a Jeep Wrangler (or the upcoming Ford Bronco), but not a full-on luxury vehicle like the Mercedes-Benz G-Class. The Defender can match those vehicles in off-road capability, but with on-road manners that will make the trip to the trailhead more comfortable.

The Defender does come up a bit short on character. It lacks the Wrangler’s convertible roof and removable doors, and the G-Class’ V8 swagger, and it’s styling is a bit less distinctive than those SUVs. What it lacks in flash, though, the Defender makes up in competence.

Yes. The Defender has the off-road capability you want and the everyday practicality you need.