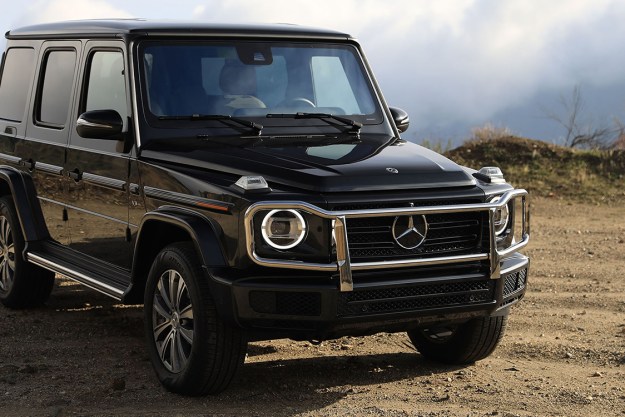 “If you’ve been waiting for a more civilized G-Class, now’s your time to strike.”

Forty years ago, Mercedes-Benz unveiled the 460-series Geländewagen. Developed primary for military applications, the original civilian G-wagen was a no-nonsense, highly utilitarian machine that served as a German counterpoint to serious off-roaders like the Land Rover Series III.

A lot has changed since then. While Mercedes has admirably kept off-road prowess near the top of the list of design priorities as the G-Class matured over the years, the more recent adoption of military-spec trucks by the celebrity class has altered the mission of many of these machines. One could argue that today’s G-Class has more in common with an S-Class than it does with a Wrangler Rubicon.

The $124,500 base price of the G550 backs up that assertion, and our tester rang up $134,315, largely due to the addition of options like massaging seats and Nappa leather. But the G-Class is still undoubtedly an outlier in the Mercedes-Benz lineup – so much so that the body-on-frame truck is built in Austria by Magna-Steyr for Mercedes rather than alongside the automaker’s other offerings. There are three locking differentials outfitted to the truck as standard, as well as a live axle rear end. That’s serious off-road hardware you won’t find in a run-of-the-mill crossover.

While the G-Class is still an anachronism, Mercedes has made an effort to update it with some modernity, a strategy aimed at addressing the concerns of the current customer base while retaining the trademark characteristics that have made the slab-sided SUV an automotive icon. Have they been successful in that mission? We put the all-new machine through its paces on streets of Los Angeles and in the storm-battered San Bernardino Mountains to find out.

The G550’s squared-off look is undoubtedly a major selling point for the truck – it sticks out amongst a sea of vehicles that have been designed in wind tunnels, now perhaps more so than ever. The exposed hinges, clamshell hood, and flat panels give the G-Class a purposeful look, and it’s backed up by a pronounced heft to the proceedings – the doors take more muscle to close than you initially expect them to, and the locks come down with a sharp clack that makes it feel like you’ve just secured yourself in a bank vault. Brushed aluminum and wood accents provide visual stimuli and a sense of luxury without bordering on garishness. It feels better built inside than Land Rover’s Range Rover, one of its main competitors.

Over the years, the G-Class has received criticism for its cramped confines, so Mercedes threw some development weight behind addressing the issue with this new model. It’s now 2.1 inches longer and 2.5 inches wider than its predecessor despite losing 375 pounds, and the expanded exterior dimensions help to provide more interior room. Front occupants score 1.5 inches of additional legroom out of the deal, while rear passengers gain a whopping 5.9 inches of additional legroom. The brick-like shape of the G-Class has always facilitated ample headroom, even for taller occupants, and the new model is no exception to the rule.

The rear door swings open to reveal an abundance of cargo room despite the fact that the rear seats do not fold flat. Although the official number is likely a bit lower than the outgoing model because of the extra rear passenger space, you’re still working with about 80 cubic feet of space – more than enough for most folks. To add context, the Range Rover boasts up to 31.8 cubic feet of trunk space with both rows of seats left up, and 68.6 cubes with the second row folded flat.

A 12.3-inch infotainment display with Apple CarPlay and Android Auto compatibility provides the center stack with a much-need dose of modernity that presents itself far better than the tacked-on look of outgoing model’s COMAND system. While the G550 comes with analog gauges for the speedo and tach by default, a second 12.3-inch display for the gauge cluster is optional and replaces those analog elements when equipped.

The infotainment system is controlled by way of a rotary dial and touchpad combination, while a small collection of hard buttons on the center console and steering wheel provide quick access to often-used functions. The touchpad is generally receptive to inputs, but it can be finicky in colder temperatures or when wearing gloves, which we occasionally found frustrating since there are no other methods of getting around in the menu system.

While the COMAND system’s integrated navigation gets the job done, the sharp resolution of the 12.3-inch display along with Apple CarPlay and Android Auto compatibility means that a lovely rendition of Google Maps is just a USB connection away, making the latter our preferred method of handling nav and DJ duties during our time with the G550.

Four drive modes are available via a toggle switch on the center console – Eco, Comfort, Sport, and Individual. Comfort is the default state for the vehicle, while Eco dulls response in pursuit of higher efficiency, and Sport dials up the urgency for sharper control. The Individual setting allows the driver to pick and choose their preferred settings among the variables provided in order to best suit their taste.

The new G-Class also sports a bevy of standard active safety features, including blind spot monitoring, automatic emergency braking, and lane-keeping assistance. These features finally bring it into the 21st century, and place it on par with other models in its competitive set.

Press the ignition button and the G550 roars to life with an air of authority. Under the hood is Mercedes’ twin-turbocharged, 4.0-liter V8, which generates 416 horsepower and 450 pound-feet of torque in this state of tune, and power is sent to all four wheels through a nine-speed automatic gearbox. It’s a combination that’s good for a sprint to 60 mph in just 5.5 seconds – an eyebrow-raising feat given the truck’s 5,600-pound curb weight. That’s quicker than the entry-level Porsche Cayenne. You’ll never think twice about merging onto the highway or passing a truck on a twisty, two-lane road.

Whatever the G550 might lack in on-road manners it more than makes up for when the conditions are less than hospitable.

The G-Class has never been a nimble machine, but Mercedes has put some effort into providing some improvement here as well, ditching the recirculating-ball steering rack in favor of a more conventional rack and pinion setup and swapping out the live front axle for a double wishbone suspension.

Working in concert, these chassis tweaks help to provide a more traditional driving experience that makes piloting the big machine less of a harrowing affair. Our tester was equipped with optional adaptive dampers, which help to curtail body motion in the Sport setting while allowing for reasonable compliance during everyday driving in Comfort mode.

Around town the G550 is still a bit of an oaf – the big, heavy truck requires patience and deliberate inputs even in its sportiest settings, and the slow ratio of the new steering rack doesn’t exactly encourage spirited driving – there’s an AMG-tuned G63 model for that sort of work, after all. Buyers seeking a large, luxurious SUV that’s relatively city-friendly should look at the Porsche Cayenne. There’s also a noticeable amount of wind noise at freeway speeds, no doubt a result of the truck’s boxy silhouette.

Some vehicles are more capable off-road, and others are better behaved on-road, but none of them are a G-Class.

But whatever the G550 might lack in on-road manners, it more than makes up for when the conditions are less than hospitable – a discovery we made when we found ourselves in the middle of a snow storm while heading back down the mountain. Although the Pirelli all-season tires were a bit out of their depth in those icy conditions, the G550’s all-wheel drive and sophisticated traction control system kept the truck confidently planted no matter what the elements threw at us.

With lots of heft to lug around, and a boosted V8 under the hood, it’s not surprising that the G550 isn’t the king of fuel efficiency. Official EPA numbers pegged it at 13 mpg city, 17 mpg highway, and 14 mpg combined, and we saw a touch less than that because of our inclination to disable the automatic start/stop feature and our lead-footed driving style. The Range Rover doesn’t do much better in its standard configuration, but Land Rover offers fuel economy-conscious buyers turbodiesel and plug-in hybrid options rated at 24 mpg and about 20 mpg combined, respectively.

For better or worse, the G-Class is an outlier not only among the Mercedes-Benz lineup, but the industry as a whole. Its closest rival would be the Range Rover, which starts at roughly half the price of the G550 and touts more available ground clearance as a result of its adjustable air suspension.

The Range Rover is also a bit more well-behaved around town, but that’s unlikely to matter to most G-Class buyers. For many, this truck is as much a stylistic statement as it is an instrument of off-road mobility, and in that regard, the Range Rover just won’t turn heads like the G550 will.

All new Mercedes-Benz vehicles come with a 48-month, 50,000-mile warranty that covers the vehicle bumper-to-bumper. An available extended warranty option adds 36 months and 100,000 miles worth of coverage.

To really embrace the G-Class’s current role as equal parts status symbol and off-roader, we’d opt for mystic blue metallic paintwork with 20-inch AMG multi-spoke wheels to give the truck some visual flair.

We’d also stick with the Nappa leather included in Executive Interior Package our tester came with, along with the optional adaptive dampers included as part of the A20 Suspension Package, but we’d swap out the walnut interior trim for brown ash wood.

Buying a G-Class is an emotional purchase. Like a supercar, the G550’s appeal isn’t based on practicality, efficiency, or reliability – you buy a G-wagen because it’s a G-wagen. Mercedes-Benz understands this, and it has given the sport-utility a number of updates that make it easier to live with on a day to day basis without altogether abandoning its intent and purpose.

Some vehicles are more capable off-road, and others are better behaved on-road, but none of them are a G-wagen. And for many would-be owners, that’s all that really matters.

If you’ve been waiting for a more civilized G-Class, now’s your time to strike.