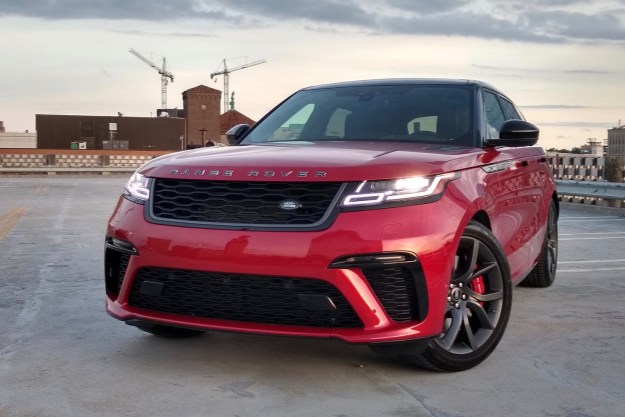 That name requires a lot of unpacking. Launched for the 2018 model year, the Velar is part of Land Rover’s effort to turn the iconic Range Rover into a family of models. The Velar is sleeker and more car-like than the original Range Rover, which remains the brand’s flagship. And the SVAutobiography Dynamic Edition is a one-year-only special edition that packs a supercharged V8 instead of the usual V6 engine.

The Velar was already Land Rover’s most tech-heavy SUV, but the V8 adds performance to its resume. That added capability comes at a price, though. The SVAutobiography Dynamic Edition starts at $91,775 — a whopping $34,550 more than a base Velar.

The Velar (the name is a reference to the first Range Rover prototypes from 1969) pushes the limits of Land Rover design, It eschews traditional SUV boxiness for a more streamlined look. The steeply raked windshield and low roof give the Velar a completely different silhouette than the original Range Rover and the smaller Range Rover Sport, while short overhangs create a sporty appearance and ensure bodywork won’t get hung up on obstacles while off-roading.

Differences between the SVAutobiography Dynamic Edition and the standard Velar are subtle. The Dynamic Edition gets a different front bumper, with bigger cooling outlets that feed air to the V8 engine and brakes, as well as a new rear bumper with quad exhaust tips. A tray under the transmission tunnel helps improve aerodynamic efficiency.

The interior feels more like the cockpit of a sports car than an SUV. You sit fairly high off the ground, but the dashboard, center console, and door sills rise up to envelope you. While that does make it easier to reach the cupholders or touchscreen, it also creates the worst of both worlds. A big, tall vehicle that you can’t see out of.

The interior feels more like the cockpit of a sports car than an SUV.

Interior material quality is high, as should be expected in a vehicle costing this much. Land Rover included plenty of real metal trim, and the quilt-pattern stitching on the seats is a neat touch. However, Land Rover also used a lot of piano black plastic, which smudges and scratches easily, and also creates glare in direct sunlight. With the sun at certain angles, the piano black and metal trim, along with the vast expanse of screens, can blind a driver like paparazzi flashbulbs on the red carpet.

The Velar has more cargo space than the GLC or Macan, but the Mercedes has more legroom front and back (Porsche doesn’t publish interior measurements for the Macan). The BMW X3 M has more cargo space than the Land Rover, but only with the rear seats folded. While smaller overall, the Alfa Romeo Stelvio offers more headroom than the Velar, as does the X3 M. Subjectively, the Velar’s rear seats felt comfortable and spacious, but the front seats felt cramped, with limited legroom.

The Velar has Land Rover’s InControl Touch Pro Duo infotainment system which, as the name implies, has dual 10.0-inch touchscreens. The upper screen handles phone, navigation, and media functions, and can tilt up to 30 degrees for better positioning. (Apple CarPlay and Android Auto are standard, as is a Wi-Fi hot spot that can handle up to eight devices.)

The lower screen handles vehicle settings and climate control. It has supplementary knobs that serve as a handy way to change cabin temperature or switch between different drive modes. Screen menus are logically arranged, with high-quality graphics, but load times for both screens were slow, especially right after starting up the car.

The driver also gets a 12.3-inch digital instrument cluster, head-up display, and capacitive steering-wheel controls. Those controls work well, but their shiny black plastic finish is yet another contributor to glare in the cockpit – something Lincoln managed to avoid with its reconfigurable steering wheel controls.

One screen gets supplementary knobs that serve as a handy way to change cabin temperature or switch between different drive modes.

As with most other luxury cars, it’s surprising to see adaptive cruise control as an optional extra when it’s standard on some cars from mainstream brands like Honda and Toyota. Land Rover also doesn’t offer anything more sophisticated than basic lane keep assist. Other luxury brands (and even some mainstream ones) offer tech that can actively steer the car to keep it centered in its lane.

The driver aids performed well, with the exception of the 360-degree camera system. Poorly chosen camera angles and a confusing interface made it unhelpful. The 360-degree view also doesn’t automatically appear, and couldn’t be engaged in certain situations. A system like this can be very helpful in an SUV like the Velar, so it was frustrating that Land Rover’s effort fell short.

The SVAutobiography Dynamic Edition’s V8 engine transforms the Velar. Where the standard Velar is a laid-back and luxurious cruiser, the Dynamic Edition is exciting and, well, dynamic.

The 5.0-liter supercharged V8 is used in numerous models from Land Rover and sibling brand Jaguar. In the Velar, it produces 550 horsepower and 502 pound-feet of torque. For comparison, the most powerful V6 Velar can only muster 380 hp and 332 lb-ft. Power is channeled to all four wheels through the same eight-speed automatic transmission used in other Velar variants.

Land Rover estimates it can go from zero to 60 mph in 4.3 seconds, with a top speed of 177 mph. That’s good for such a heavy vehicle but, unfortunately for Land Rover, there are a lot of high-performance SUVs on sale today. The Velar has a lot more power than a BMW X3 M Competition, Mercedes-AMG GLC63, or Porsche Macan Turbo, but it can’t better their zero-to-60 mph times. Out of the box, the Macan Turbo matches the Velar’s time, and it can do 4.1 seconds with the optional Sport Chrono package, according to Porsche. BMW quotes 4.0 seconds for the X3 M Competition, while Mercedes claims the GLC63 can reach 60 mph from a standstill in just 3.8 seconds.

With its engine breathing through a quad exhaust system, the Velar sounded like an angry bear.

In addition to the V8 swap, Land Rover gave the SVAutobiography Dynamic Edition bigger brakes, beefed-up four-wheel drive hardware to handle the extra power, and new tuning for both the four-wheel drive system and adaptive air suspension. Despite the fairly limited nature of the changes, the Dynamic Edition felt pretty sporty on twisty roads. Steering was precise, body roll was nicely controlled, and the bigger brakes had plenty of confidence-inspiring stopping power.

With its engine breathing through a model-specific quad exhaust system, the Velar sounded like an angry bear. And like a bear, this Land Rover was surprisingly nimble, though still a beast. If corner carving is a priority, you’re better off with a sports sedan or sports car, but the Velar handles curves better than the average SUV.

While it emphasizes on-road driving, the Velar is also equipped for off-roading. It sports a locking rear differential and Land Rover’s Terrain Response system, which adjusts various vehicle settings for different surfaces. The Velar also has All-Terrain Progress Control, which acts like low-speed cruise control on slippery surfaces.

However, the Velar’s four-wheel drive system only has a single-speed transfer case, rather than  the two-speed units used in most serious off-roaders. That, along with our test car’s 21-inch wheels and low-profile tires, means this SUV wouldn’t be our first choice when hitting the trails.

The downside of a V8 is poor gas mileage. The SVAutobiography Dynamic Edition is rated at 17 mpg combined (15 mpg city, 20 mpg highway), compared to 20 mpg combined (18 mpg city, 24 mpg highway) for the most powerful V6 Velar. Over a week of driving, we only managed an average 14.5 mpg, according to the car’s trip computer.

Crash-test ratings from the Insurance Institute for Highway Safety (IIHS) and National Highway Traffic Safety Administration (NHTSA) are not available. While the Velar has been on sale for a few years, high-end vehicles like this are typically a low priority for testing, as they sell in small numbers.

Land Rover does not have a good reputation for reliability, but the automaker offers a four-year, 50,000-mile limited warranty that’s comparable to other luxury brands, as well as a six-year corrosion/perforation warranty with unlimited mileage.

Is it better to go for the SVAutobiography Dynamic Edition, or the standard Velar? While it comes with a significant price premium, the Dynamic Edition is the one to get. If you can afford it, the V8 powertrain adds a sporty character other Velar models are missing.

This version also gets the full complement of driver aids and other features, some of which are extra-cost options on other trim levels. The Dynamic Edition also has a decent shot at collectability: Land Rover hasn’t set a firm production cap, but a spokesperson told Digital Trends that the company only expects to make 500 of these special editions.

The 2020 Land Rover Range Rover Velar SVAutobiography Dynamic Edition proves the devil is in the details. It’s a stylish SUV that combines luxury, performance, and tech like few other vehicles. Yet a closer look reveals some issues.

Land Rover’s InControl TouchPro Duo infotainment system fulfills the promise of a smartphone-like interface, but slow screens dampen the experience. The interior is luxurious, but a lack of front legroom and glare-inducing trim pieces show it could have used another pass through customer clinics. The Velar generates impressive performance figures, but the BMW X3 M Competition, Mercedes-AMG GLC63, and Porsche Macan Turbo are quicker. Other Land Rover models are better equipped for off-road driving.

These flaws come short of ruining the experience, however. The standard Velar is a solid but luxury SUV that doesn’t really stand out from the many available alternatives. This model’s V8 engine, however, transforms the SVAutobiogrpahy Dynamic Edition into something truly special.