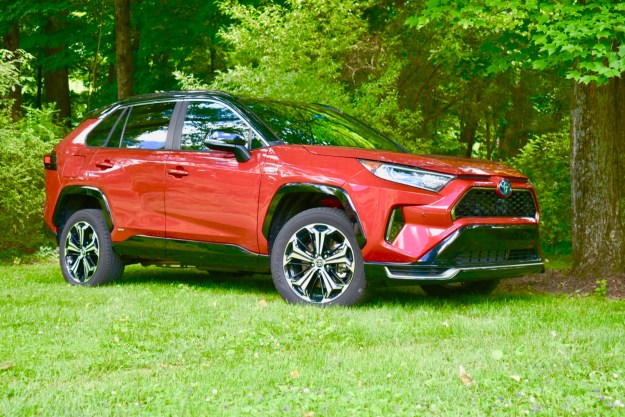 The Prime looks like an ordinary RAV4, Toyota’s bestselling model. However, like the Prius Prime, the RAV4 Prime is a plug-in hybrid, boasting better gas mileage than the current RAV4 Hybrid model. Yet the Prime isn’t just the most fuel-efficient RAV4. It’s also the most powerful, quickest accelerating RAV4, too.

The RAV4 Prime comes in two trim levels. The SE starts at $39,195, while XSE models like our test car start at $42,500. That means the base SE starts about $2,000 above the most expensive RAV4 Hybrid. However, based on its battery pack size, Toyota expects the Prime to qualify for a $7,500 federal tax credit, which should erase that difference.

Unlike the Prius Prime, which gets markedly different styling than the standard Prius, the RAV4 Prime looks like any other RAV4. Black exterior trim, a different grille, model-specific wheels, and badging are the Prime’s only identifiers. The RAV4 itself is styled to look like a rugged off-roader, but it shares the same Toyota New Global Architecture (TNGA) platform as cars like the Corolla and Camry.

The interior is virtually unchanged as well, which is not a bad thing. Chunky knobs and strategically-placed rubber grips give the interior a rugged feel, while enhancing usability. The freestanding infotainment touchscreen is easy to reach from the driver’s seat but is a bit of a stretch for front-seat passengers. The front seats were fairly comfortable, but the rear seats’ bottom cushions were flat and unsupportive.

Chunky knobs and strategically-placed rubber grips give the interior a rugged feel, while enhancing usability.

While Toyota nailed the design, interior material quality fell short. The Prime is the flagship of the RAV4 lineup, but the interior didn’t seem like a step up from less-expensive models. The leatherette seats looked like they were taken out of a taxi, and trim pieces appeared to have been sourced from Rubbermaid.

Toyota claims the battery pack, which is mounted under the floor, doesn’t impact interior space. That doesn’t make for segment-leading interior space, however, as the RAV4 was already behind most competitors. The RAV4 Prime boasts more rear headroom than the Ford Escape and Mitsubishi Outlander plug-in hybrids, but the Escape has more rear legroom, thanks to a sliding second-row seat. The Toyota also offers more cargo space than the Ford and Mitsubishi. The RAV4 and Outlander also have 120-volt outlets in their cargo areas to power tools, camping equipment, or whatever else you might want to plug in on the go.

The base RAV4 Prime SE gets an 8.0-inch touchscreen with Apple CarPlay and Android Auto and a built-in Wi-Fi hotspot. The XSE trim level gets a 9.0-inch touchscreen — the largest available in any RAV4. An optional Premium Package for the XSE adds a head-up display. It’s the only way you can get that feature on a RAV4.

The infotainment system is easy to use, thanks in part to backup analog controls for most important functions. The digital instrument cluster display will be familiar to anyone who has driven another Toyota hybrid. It crams a lot of information into a relatively small space, but is easy to acclimate to. Overall, the infotainment experience doesn’t offer anything special, but does its job in a straightforward way.

The infotainment system is easy to use, thanks in part to backup analog controls for most important functions.

The standard bundle of driver aids is comparable to other mainstream brands, although Lane Tracing Assist shouldn’t be confused with the more aggressive steering-assist features offered by the likes of Ford, Nissan, and Subaru. Toyota’s version is more of an upgraded lane keep assist feature than a true steering aid.

The RAV4 Prime tries to excel at two very different disciplines: Performance and efficiency. It uses an upgraded version of the RAV4 Hybrid powertrain to achieve some impressive numbers.

The 2.5-liter gasoline four-cylinder engine makes the same 176 horsepower as before but, with the added grunt of two electric motors, total system output increases to 302 hp. That’s 83 hp more than the RAV4 Hybrid, and substantially more than the Ford Escape or Mitsubishi Outlander plug-in hybrids. The Escape is also front-wheel drive only, while the two Japanese vehicles have all-wheel drive.

The RAV4 Prime can do zero to 60 mph in 5.7 seconds, according to Toyota, a number previously reserved for sports cars. That also makes the RAV4 Prime the quickest four-door Toyota currently sold in the United States (only the Supra sports car is quicker).

The all-wheel-drive hybrid system is similar to other Toyota vehicles. It uses a dedicated electric motor to power the rear wheels, without any mechanical connection to the front wheels. As in the RAV4 Hybrid, that rear motor is also used for torque vectoring, shunting power side to side to improve on-road handling and to increase traction on slippery surfaces. A “trail” driving mode helps with the latter as well.

The RAV4 Prime is the quickest four-door Toyota currently sold in the United States.

On the road, the RAV4 Prime felt as quick as the number suggest. It wasn’t just the extra power, it was how that power was delivered. The Prime felt like an electric car, delivering an instant surge of torque at every prod of the right pedal. This smooth, urgent acceleration occurred regardless of the battery’s state of charge. A slight hum was the only indication that the gasoline engine was on.

Like the Mitsubishi Outlander, the RAV4 Prime has paddle shifters that can be used to adjust the level of regenerative braking, helping to slow the car without using the braked pedal and recovering some energy, to boot. However, the effect didn’t feel as dramatic in the Toyota as it did in the Mitsubishi, and you have to upgrade from the SE to the XSE to get those paddles.

Toyota also tried to make the Prime more refined than other RAV4 models, giving it thicker laminated glass, more sound deadening, and different suspension tuning. The Prime did feel appreciably more quiet and comfortable than other RAV4 variants, but perhaps Toyota should have gone in the opposite direction with a sportier suspension setup. As is, the chassis can’t capitalize on that 302 hp.

The RAV4 Prime proves that power doesn’t have to come at the cost of efficiency. Toyota quotes 42 miles of electric range, with an efficiency rating of 94 MPGe. That’s more electric range than a first-generation Chevrolet Volt, with an identical efficiency rating. When it debuted in 2010, the Volt was a purpose-built vehicle considered General Motors’ “moonshot,” so seeing similar figures in an ordinary crossover is remarkable. The RAV4 Prime also offers nearly double the electric range of the Toyota Prius Prime, albeit with much lower efficiency.

The Prime beats the Ford Escape and Mitsubishi Outlander on electric range, although the Ford is more efficient, at 100 MPGe. Toyota did not have gasoline fuel economy ratings available at the time of publication, but we averaged 42.5 mpg, according to the car’s trip computer.

With the standard 3.3-kilowatt onboard charger, a full charge takes 12 hours from a household 120-volt outlet, or 4.5 hours from a 240-volt Level 2 charging station. A 6.6-kW charger available on the XSE trim level cuts the Level 2 charging time to 2.5 hours. That’s as good as it gets, as Toyota doesn’t offer DC fast charging on the RAV4 Prime (it’s standard on the Mitsubishi Outlander).

Safety ratings for the Prime aren’t available yet, but the standard RAV4 received a “Top Safety Pick” rating from the Insurance Institute for Highway Safety (IIHS), missing out on the highest rating due to poor headlights. The National Highway Traffic Safety Administration (NHTSA) gave the standard RAV4 a five-star overall rating.

Toyota offers a three-year, 36,000-mile, basic warranty and five-year, 60,000-mile, powertrain warranty, as well as free scheduled maintenance for two years or 25,000 miles. The Prime’s battery pack has its own 10-year, 150,000 mile, warranty, and other hybrid system components get an eight-year, 100,000-mile warranty. The RAV4 has a good overall reputation for reliability, with many hybrid models enduring grueling taxi service without problems.

The most tech-friendly incarnation of the RAV4 Prime is the XSE with the optional Premium Package. The XSE gets a few tech features the base SE trim level doesn’t, including a larger 9.0-inch touchscreen and Qi wireless phone charging. The Premium Package ($3,765) adds a head-up display, more powerful 6.6-kW onboard charger, cargo area power outlet, video rearview mirror, 360-degree camera system, and park assist with front and rear automatic braking.

The Prime itself is the best RAV4. Just as the RAV4 Hybrid outclasses the gasoline model in power and refinement, as well as gas mileage, the Prime adds performance to this crossover’s resume, along with even greater efficiency. If you’ve got the extra cash, the Prime elevates the RAV4 from a pretty good car to a world-beater.

The RAV4 Prime is also the class of its (admittedly small) competitive field. It beats the Mitsubishi Outlander on cargo space, performance, and efficiency, while offering more tech features. The Ford Escape plug-in hybrid falls short of the RAV4 Prime on electric range, but offers greater efficiency. The Ford is also priced below the Toyota, starting at just under $35,000. However, the Escape itself is not our favorite small crossover, and the plug-in hybrid doesn’t have all-wheel drive.

Yes. The RAV4 Prime is a true jack of all trades.

GMC poured all of its truck-making expertise into the Sierra EV pickup
Check out Spectre, Rolls-Royce’s first all-electric car
2023 Kia Niro EV first drive review: Practical doesn’t have to bore you to tears
Nissan wants the 2023 Ariya to be its comeback EV, but the bar has been raised
Uber says it’s investigating ‘cybersecurity incident’
Nvidia’s Drive Concierge will fill your car with screens
The Uber hack is an outrageous tale of a teen hacking for fun
Tesla to fix window software on 1M of its U.S. cars
Lux and refreshingly livable, Mercedes’ EQE moves EVs mainstream
How to watch Tesla’s AI Day tonight and what to expect
2023 Audi Q4 E-Tron first drive: the predictable and traditional EV SUV we need
We need more 7-passenger EVs, but the 2023 Mercedes EQS SUV has room to improve
Tesla AI Day 2022: Optimus, self driving cars, and everything else announced