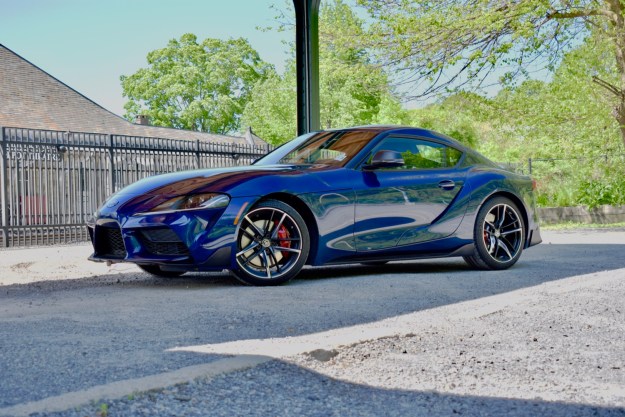 “Toyota's reborn flagship sports car was worth the wait.”

Known for the workaday Camry and RAV4, Toyota doesn’t have many nameplates that stir tons of excitement. That’s why the return of the Supra is such a big deal. The Supra is to Toyota what the Mustang is to Ford, an iconic performance car with a passionate fan base. Like the Mustang, the Supra also became a movie star, thanks to the Fast & Furious franchise.

Unlike any previous Supra, the fifth-generation 2020 model was developed with outside help. It may have a Toyota badge on the hood, but underneath the 2020 Supra is actually a BMW Z4. The two cars were developed in tandem, a move that gave Toyota a new Supra at a fraction of the cost of developing it independently. It also means you’ll find German DNA on virtually every inch of this ostensibly Japanese sports car.

A similar strategy birthed the Toyota 86, which is twinned with the Subaru BRZ. We liked the 86, so can Toyota work the same magic with a different partner? To find out, we spent a week with a 2020 Toyota GR Supra 3.0 Premium (“GR” stands for “Gazoo Racing,” the Toyota division tasked with fine-tuning the car).

The Supra has a base price of $50,920, but the Premium model adds features like wireless Apple CarPlay, an upgraded audio system, and a larger touchscreen. That, along with an optional Driver Assist package, brought the price of our test car to $56,615.

Inside and out, this car is like no previous Supra. Instead of taking design cues from past models, the 2020 Supra’s exterior styling is based on the 2014 Toyota FT-1 concept. Translating concept cars into production vehicles is always difficult, as concepts generally aren’t designed with crash testing or interior ergonomics in mind. While a significant amount of the FT-1 made it into the production Supra, some compromises were made. The front end in particular looks a bit bloated compared to the FT-1, likely a concession to European pedestrian-safety standards.

Aside from the Toyota logo on the steering wheel, the interior is all BMW. The shifter and rotary infotainment controller are lifted straight from the German automaker’s catalog, and the touchscreen sits on top of the dashboard, rather than being embedded in it, as in every other Toyota. The car’s BMW DNA shows up in small details, too. To open the hood, you have to pull the lever twice, and you have to press a button on the shifter for it to work. Even the door chimes have the same distinct BMW sound.

The Supra has one of the best driving positions of any current sports car.

This isn’t a bad thing. BMW knows great interiors, and the Supra is no exception. It has one of the best driving positions of any current sports car. It’s easy to get comfortable, the low dashboard affords excellent outward visibility, and all controls are easy to reach from the driver’s seat.

However, if you’re expecting luxury, prepare to be disappointed. This may be a BMW interior, but it’s an entry-level version, especially compared to the Supra’s BMW Z4 sibling.

The 2020 Supra is available only as a two-door, two-seat coupe; unlike the “Fast and Furious”-era Supra, there is no lift-out roof panel. Interior space is about the same as the convertible-only Z4, although the BMW offers a bit more headroom. The Toyota boasts 10.2 cubic feet of cargo space to the Z4’s 9.9, however. The Chevrolet Corvette Stingray and Porsche 718 Cayman have 12.6 cubic feet and 14.9 cubic feet of space, respectively, albeit split between front and rear trunks.

The Supra has the same iDrive infotainment system used in current BMW models, with identical graphics, menu layout, and rotary controller. The standard touchscreen is 6.5 inches, and an 8.8-inch digital instrument cluster is standard as well. Premium models get an 8.8-inch touchscreen, as well as a head-up display and wireless phone charging.

Because it uses a BMW infotainment system, the Supra gets wireless Apple CarPlay – the only Toyota model with that feature. However, base models don’t get CarPlay at all, and Android Auto is not available. BMW plans to add wireless Android Auto to 2021 models, but it’s unclear if the Supra will get it as well.

The infotainment experience proves that there is no shame in borrowing from the best.

As with the overall interior design, the infotainment experience proves that there is no shame in borrowing from the best. The iDrive system worked as well in the Supra as it does in other BMW models, with intuitive menus and a rotary controller that was vastly easier to use than the awkward touchpad from Toyota’s Lexus luxury division. The only blemishes were a screen that tended to wash out in direct sunlight, and an audio system that sounded more impressive on paper than it did in real life. (Premium models get a 12-speaker, 500-watt JBL system.)

Open the hood of the 2020 Toyota Supra, and the logic of the BMW partnership becomes apparent. The German automaker knows how to make a great driver’s car, yes, but more importantly, BMW was able to provide Toyota with an inline-six engine. An inline-six was the last Supra’s calling card, but Toyota no longer has one in its lineup. Rather than spend the money to develop a new engine just for one model, Toyota borrowed BMW’s.

The 3.0-liter turbocharged engine is shared with the Z4 and numerous other BMW models, as is the eight-speed automatic transmission (if you want a manual, get an 86). Our 2020 test car made 335 horsepower and 365 pound-feet of torque, but 2021 models get a boost to 382 hp and 368 lb.-ft. Toyota will also add a 2.0-liter turbocharged four-cylinder engine to the lineup for 2021. All Supra models are rear-wheel drive for the best possible handling.

Toyota says the 2020 Supra 3.0 will do zero to 60 mph in 4.1 seconds. That’s about as quick as a Porsche 718 Cayman S (the Cayman is 0.1 second slower in base form, but 0.1 second quicker with the optional Sport Chrono package). It’s also 1.0 second quicker than a 1993 Toyota Supra Turbo, according to a Motor Week test, in case you were wondering how the modern Supra compares to its movie star predecessor. The more powerful 2021 Supra 3.0 will do zero to 60 mph in 3.9 seconds, matching the six-cylinder BMW Z4, according to estimates from both manufacturers.

What distinguishes the Supra from other sports cars is its maturity.

The Supra felt plenty quick, but that wasn’t what made the biggest impression. What distinguishes the Supra from other sports cars is its maturity. It was comfortable and quiet enough for a long road trip, and agile enough to make backroads fun. The Supra strikes a better balance between comfort and sportiness than its Z4 sibling, which feels more like a traditional luxury car than a true sports car.

Toyota also achieved this with its own tuning. While some other automakers include a bewildering array of driving modes and expect customers to figure out what works best, Toyota stuck with just two modes: Normal and Sport.

While engineers nailed some details, they missed others. Toyota could have spent a bit more time tuning the steering, which has the same level of feedback as a worn-out arcade game. While the Supra is admirably refined, that also makes for a less engaging driving experience; the car doesn’t really come alive until you hit extralegal speeds. The Supra also wasn’t designed to be driven with the windows down, a compromise likely made to achieve greater aerodynamic efficiency. Lower the windows at anything more than parking lot speeds, and the buffeting noises become unbearable.

The 2020 Supra is rated at 26 mpg combined (24 mpg city, 31 mpg highway), which is identical to the Toyota’s BMW Z4 sibling and slightly better than a Porsche Cayman S. Over a week of driving, we averaged 24 mpg, according to the car’s trip computer.

Because the Supra is a new vehicle, crash-testing ratings from the Insurance Institute for Highway Safety (IIHS) and National Highway Traffic Safety Administration (NHTSA) aren’t available yet, and predicting future reliability is difficult. Expect the Supra to be more like a BMW than a Toyota in that area, though, given that all of its major components are from the German firm. That means reliability might fall short of Toyota’s rock-solid reputation.

Toyota offers a three-year, 36,000-mile, comprehensive warranty and five-year, 60,000-mile, powertrain warranty, which are about average for a new car.

Toyota keeps things simple with just two trim levels: Base and Premium. You’ll want to go with the latter if you want the most tech. The Premium model gets the larger, 8.8-inch touchscreen, wireless Apple CarPlay, and a head-up display as standard equipment. On the driver-assist side, getting the full complement of features requires the optional Driver Assist package, which adds adaptive cruise control, blind spot monitoring, rear cross traffic alert, and parking sensors for $1,195.

Previous generations of the Supra were well catered to by the aftermarket, and we expect that to be the case with the new model. It may take time for parts to hit the market, but plenty of upgrades should be available in due course. Papadakis Racing has already taken the Supra’s BMW-sourced engine up to 1,000 hp, showing that the engine has plenty of tuning potential.

The 2020 Toyota Supra was worth the wait. It’s a well-executed sports car that balances driving thrills with everyday usability and refinement. Some fans may not like Toyota’s use of a BMW platform, but they probably haven’t driven the new Supra. From the infotainment system to the engine, the BMW bits are what make this car so good.

That goodness comes at a price, though. The Supra’s $50,920 base price undercuts the Porsche Cayman and Chevy Corvette, but once you check the boxes for optional tech features, that gap is largely erased. The Corvette starts at $59,995 — just $3,380 more than our test car — and is on a different level of performance. If you’re not wedded to the idea of a two-seater, you could also have a pretty nice Ford Mustang for the same price as a base Supra.

For much less money than the Supra, two sports cars — the Nissan 370Z and Toyota’s own 86 — boast more personality. With available manual transmissions and more visceral driving experiences, they leave in sensations the Supra filters out. However, neither can match the Supra on power or tech, and the Supra is the only one of the three we’d want to take on a road trip.

Yes. The Supra is a great sports car that you can drive every day.