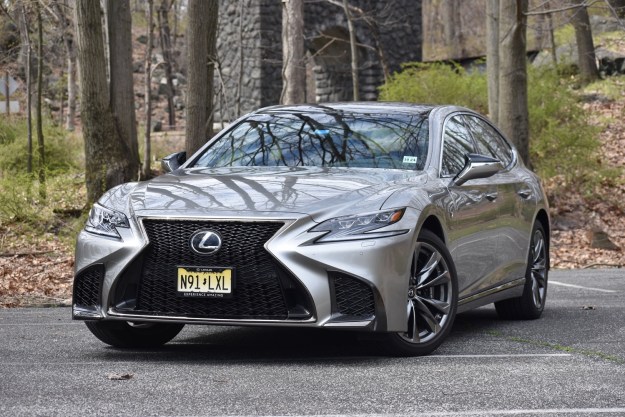 With the 2020 LS 500, Lexus is letting its hair down. The original Lexus LS shocked the world with its amazing build quality and reliability, all at a lower price than a comparable Mercedes-Benz or BMW of the time. The first LS proved to be pretty bulletproof, with one example racking up 1 million miles. Luxury car purchases are inherently irrational, though, so Lexus needed cars that could appeal to the heart as well as the head.

Redesigned for the 2018 model year, the LS got more expressive exterior and interior styling to give it a distinct personality, something previous generations of this big sedan lacked. The LS also got a tech and performance upgrade to keep pace with rivals like the Audi A8, BMW 7 Series, and Mercedes-Benz S-Class.

Our test car was a 2020 Lexus LS 500 with the optional F Sport performance package and all-wheel drive (rear-wheel drive is standard). As tested, the car carried an $89,555 sticker price, about $13,000 more than a base model.

Like other recent Lexus models (and those of parent company Toyota), the 2020 LS 500 tries very hard not to be boring. From the massive “spindle” grille to headlights that look like they were designed by Zorro, the LS 500 stands out in a way its German rivals don’t. Unlike the previous-generation LS, where many of these styling elements were tacked on after the fact, the 2020 model’s exterior also works as a cohesive whole.

The interior is even better. Not only does it have a distinctive look, with aluminum trim pieces flowing across the dashboard and hand-folded pleats on the doors, but the materials are top-notch. Almost everything you touch is real metal or leather. Lexus skipped the traditional wood trim on our performance-oriented F Sport test car, but it is available as an option.

The interior is also cavernous, but that’s expected in this segment. As spacious as the Lexus is, the Mercedes-Benz S-Class and Audi A8 offer more front and rear headroom, respectively. The Audi also has a tiny bit more front legroom, while the BMW 7 Series has more legroom, and a bigger trunk.

The LS 500 stands out in a way its German rivals don’t.

Lexus nailed the design, but missed the target on tech. The infotainment system includes a 12.3-inch central display screen and a digital instrument cluster (our test car had the optional head-up display as well). Display graphics were clear and easy to read, but everything is controlled by the awkward Remote Touch Interface trackpad.

This interface is similar to a laptop, requiring the driver to move a cursor around the screen. While Lexus has made some improvements over past versions (the latest version supports handwriting recognition), the trackpad is still difficult to use while driving.

The LS comes standard with Apple CarPlay and Amazon Alexa compatibility, but not Android Auto. Some Lexus models got Android Auto for the 2020 model year, so it’s possible the feature will be added to the LS in the future. Lexus hasn’t discussed a firm timeline, however.

One unusual feature that Lexus did include was a CD player, something that has disappeared from most other new cars. The Lexus SC 430 was the last car sold in the United States with a cassette player, so Lexus clearly has a thing for throwback media.

Like most of the Japanese automaker’s other models, the 2020 LS 500 comes standard with the Lexus Safety System+ 2.0 bundle of driver aids. This includes autonomous emergency braking, road sign recognition, adaptive cruise control, automatic high beams, lane departure warning, and Lane Tracing Assist, which provides small steering inputs to keep the car centered in its lane. Separate from that package, blind-spot monitoring, rear cross-traffic alert, and parking assist are also standard on the 2020 LS 500.

The driver aids are fairly basic compared to other luxury automakers. For example, the LS can recognize stop signs, but the Audi A8 knows when traffic lights change (in 30 cities with the necessary infrastructure, at least). Lane Tracing Assist struggled with even the gentlest of curves on highways, drunkenly lurching from one side of the lane to the other. The adaptive cruise control had trouble maintaining a set speed. Going downhill, it relied too much on engine braking to slow the car, letting the speed creep up by a few mph before finally slowing down. It’s a low-resolution version of the experience you get with one of the German alternatives.

Turn off the driver aids, and the 2020 Lexus LS 500 is in its element. Lexus has been steadily improving the driving dynamics of its cars, and the LS 500 shows how far the automaker has come.

Under the hood (and a big plastic engine cover) sits a 3.5-liter twin-turbocharged V6, which makes 416 horsepower and 424 pound-feet of torque. The V6 is coupled to a 10-speed automatic transmission, with standard rear-wheel drive or our test car’s optional all-wheel drive.

Lexus said rear-wheel-drive models will do zero to 60 mph in 4.6 seconds. That means this 4,900-pound sedan is quicker than a base Porsche Cayman. It’s also quicker than the base versions of the Audi A8, BMW 7 Series, and Mercedes-Benz S-Class, and tied with the V8-powered BMW 750i. However, the Germans offer other variants of their big sedans with more power and quicker acceleration.

Lexus nailed the design, but missed the target on tech.

Our test car was an F Sport model, equipped with adaptive suspension and bigger brakes to improve handling. F Sport models don’t get the same level of upgrades as full-bore Lexus F models, but this LS 500 did fairly well with what it had.

The car never stopped feeling like the big, heavy sedan it was, but the F Sport suspension made it reasonably agile in corners. The engine was one of the punchiest turbo six-cylinders we’ve experienced, feeling like it had a few more cylinders. If big cars are like boats, then this one is more guided-missile cruiser than ocean liner.

Even in normal mode, the ride wasn’t as smooth as we’ve come to expect from cars in this segment. That may have been down to suspension tuning, as well as our test car’s 20-inch wheels. The tradeoff between ride quality and handling seemed reasonable, though.

All-wheel-drive 2020 Lexus LS 500 models like our test car are rated at 21 mpg combined (18 mpg city, 27 mpg highway), while rear-wheel-drive models do slightly better at 23 mpg combined (19 mpg city, 30 mpg highway). The ratings are fairly close to gasoline versions of the Audi A8, BMW 7 Series, and Mercedes-Benz S-Class. Over a week of driving we averaged 15.5 mpg (according to the car’s trip computer), but the average dipped into the 11-mpg range in city driving.

Lexus also offers an LS hybrid with up to 28 mpg combined, but substantially less horsepower than the non-hybrid model. Audi, BMW, and Mercedes offer plug-in hybrid powertrains with even greater fuel efficiency.

If big cars are like boats, then this one is more guided-missile cruiser than ocean liner.

Lexus offers a four-year, 50,000-mile, basic warranty and six-year, 70,000-mile powertrain warranty. The LS built its reputation on peerless reliability, and Lexus still has a fairly good reputation in this area.

It may add $6,000 to the price, but the F Sport package seems like a good investment. The adaptive suspension livens up the handling, and upgraded brakes are always a plus on a car this heavy. F Sport models also get comfortable, yet heavily bolstered front seats that are nice alternatives to the overstuffed couch cushions of some other luxury cars. The head-up display ($1,200) and 23-speaker Mark Levinson audio system ($1,940) would complete our hypothetical LS build.

The 2020 Lexus LS 500 has a powerful turbocharged engine and well-designed interior that makes for a very luxurious experience, though rivals offer better tech. Lexus needs to get rid of the clunky trackpad interface, and upgrade the driver aids. The original LS hybrid was one of the first traditional luxury cars to embrace electrification, but now Audi, BMW, and Mercedes offer plug-in hybrids. The F Sport model is indeed sporty, but not as sporty as the top versions of the German sedans.

Lexus gave the LS a soul, but now it needs to give the car a tech upgrade. The infotainment system and driver aids are the most deficient areas, but it would also be nice to see a full-bore F performance model, or plug-in hybrid, or all-electric, powertrain options. Those changes would elevate the LS from a good car into a great one. Even so, the Lexus LS 500 will send you down the road like a rocket ship, yet keep you nestled in total comfort. That’s definitely going to appeal to many buyers.

Yes. The 2020 Lexus LS is luxury with personality.