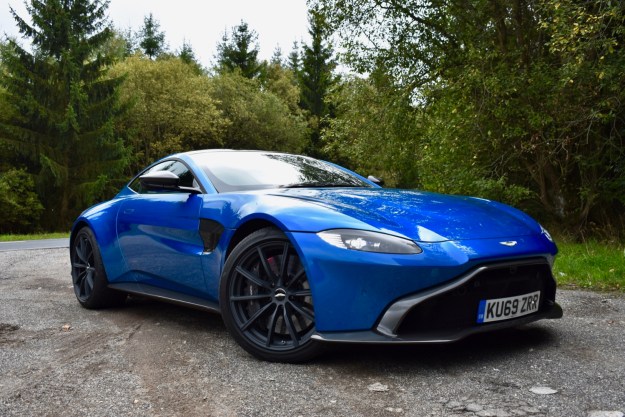 “Aston Martin listened to fans and added a manual transmission to the 2020 Vantage AMR. It's glorious.”

Car enthusiasts love manual transmissions, but they really don’t make much sense in the modern world. As satisfying as a rev-matched downshift may be, dual-clutch gearboxes can swap cogs much quicker than any human. Because they don’t make sense, that makes a stick shift the perfect fit for a modern Aston Martin.

You don’t buy an Aston because it makes sense. You buy one because it’s much cooler than a regular car. The selling points of an Aston are all subjective. It’s all about the styling, the sound, and a visceral driving experience that can’t be quantified in numbers. Aston is small and independent, with decades of accumulated street cred from 007 and motor sports. It has to do things differently.

So it’s not surprising that one of the last bastions of the manual transmission is an Aston, specifically the 2020 Aston Martin Vantage AMR. Priced at $179,995, production is limited to 200 units worldwide. Don’t worry if you miss out: Aston will make the manual transmission a regular production option for the Vantage beginning in early 2020. But do you actually want one, or is it finally time to let that clutch pedal go?

Aston Martin is one of the most famous names in the car business, but a name alone won’t move metal. An Aston Martin needs to make strong first impression, not just to be worthy of the name, but to woo buyers who might be considering something else. That’s why the Vantage looks like it was driven straight off a movie set.

If this car looks a bit familiar, that’s because it shares a bit of styling DNA with the Aston Martin DB10, a car built specifically for the James Bond movie Spectre. During a visit to Aston’s design studio, the film’s producers saw designs for what would become the Vantage, according to Motor Authority. Because the car wasn’t ready for release yet, Aston made a different version for the movie, which became the DB10.

Of the changes made in the transition from screen to street, the Vantage’s grille is a bit jarring. Where the DB10’s grille was elegant and well proportioned, it seems like Aston modeled the Vantage version on the mouth of a baleen whale. The detailing is a bit awkward as well. But the look is certainly bold, helping to distinguish the Vantage from the larger DB11 and emphasize that the new model is a clean break from its predecessor. The Vantage is also a nice counterpoint to the familiar shape of the Porsche 911, and makes the Mercedes-AMG GT (with which it shares an engine) look positively cookie cutter by comparison.

The interior is all business. Like a high quality leather jacket, the materials both look good and feel durable. The steering wheel is exactly the right size, and the shifter is in exactly the right position, as is the button for the different driving modes. The gunsight-like digital instrument cluster shows you exactly what you need to see, and nothing you don’t. It’s exactly what you want in a sports car.

While it may have a great sports car interior, the Vantage doesn’t work very well as just a car. The seats are comfortable, but their bolstering, combined with a lack of headroom, may make it difficult for drivers without a jockey-like physique to find a comfortable position. That’s an issue with most sports cars, though, so it would be unfair to single out the Vantage. However, Aston’s interior designers deserve special blame for the haphazard layout of the buttons and switches. Finding things like the trunk and hood releases took some searching. We thought about looking in the owner’s manual, but because the Vantage doesn’t have a glovebox, we couldn’t find that either.

The infotainment screen also seems like an afterthought. Its small size (8.0 inches) and cheap graphics seem out of place in a six-figure car, but at least Aston offers both Apple CarPlay and Android Auto. Rival Porsche has dragged its feet on offering the latter.

All about that ‘box

The Vantage isn’t about touchscreens or connectivity, anyway. This car is all about the driving experience, which is why a manual transmission is such a good fit for it.

That transmission is a seven-speed unit sourced from Italian firm Graziano. It features an unusual “dogleg” configuration, which moves first gear to a separate slot of shifter’s H-pattern. This puts all forward gears in sequence, theoretically making it easier to select the right gear at speed. If you’ve been driving with a conventional manual pattern your entire life, this will mess with your head. We can see where Aston was going with this, though. Upshifting through the first three gears is much simpler than in a conventional manual. But it’s also easy to grab first gear instead of third when downshifting, which is not ideal.

This car is all about the driving experience, which is why a manual is such a good fit

The gearbox also features AMshift, which automatically blips the throttle to smooth out downshifts, and allows you to upshift without lifting off the loud pedal. While a rev-matched downshift feature like this is nothing new (it’s been available on the Nissan 370Z for about a decade), it is a welcome addition here. If you take pride in your heel and toe technique, AMshift can also be switched off with a button right by the shifter.

Aside from the manual transmission, the Vantage AMR gets a mechanical limited-slip differential, as well as standard carbon ceramic brakes and forged wheels. Combined with the transmission (which is lighter than the conventional eight-speed automatic) all of these items shave 209 pounds off the Vantage’s curb weight, according to Aston. Engineers also made some changes to the suspension tuning but the AMR is otherwise identical to a standard Vantage.

Under the hood sits the same 4.0-liter twin-turbocharged V8, which is sourced from Mercedes-AMG. This engine is used in a seemingly endless array of Mercedes models — from the AMG GT sports car to the GLC 63 SUV – but it seems like an engine Aston would have designed itself. Powerful (it makes 503 horsepower and 505 pound-feet of torque in the AMR) but also characterful, it hurtles you across the landscape and keeps you entertained while doing it. Many modern cars, even sporty ones, don’t have enough engine noise. That isn’t a problem here. The V8 burbles like a coffee maker around town, and bellows like an avenging angel drunk on whiskey when you’re really on it. It’s no wonder Aston chose this engine not only for the Vantage, but for the DB11 and DBX SUV as well.

This is the first time this V8 has been coupled to a manual transmission, though, and that makes a big difference. In other cars, you’re just along for the ride. In the Vantage AMR, you’re in control of all that power. We were afraid the V8’s copious torque (which is downgraded a bit from the automatic Vantage) would make shifting largely extraneous, but the AMR loves to fire through the gears. It’s enough to make you ignore the fact that this isn’t the best manual shifter. In terms of precision, it felt medium resolution, but we were hoping for full HD.

The Vantage’s V8 hurtles you across the landscape and keeps you entertained while doing it.

The manual-transmission Vantage will do zero to 60 mph in 3.9 seconds, according to Aston. That’s 0.3 second slower than the automatic, but the manual gives the Vantage a 5 mph higher top speed, allowing it to hit an even 200 mph. That means the Vantage AMR is slightly faster than a Mercedes-AMG GT C or Porsche 911 Turbo – both of which can be had for similar money. But the Merc and Porsche are both quicker from zero to 60 mph – the Porsche by a full second. You’re likely to notice that in the real world.

You’re also more likely to notice how well the Vantage takes corners, though. A rear-wheel drive car with this much power can be intimidating, but that isn’t the case with the Vantage. The chassis setup instills confidence, encouraging you to take each corner a little bit faster. Special praise goes to the communicative steering and the grippy front end, but the whole package is excellent.

EPA fuel economy ratings for the manual transmission aren’t available yet, but the automatic 2020 Vantage is rated at 20 mpg combined (18 mpg city, 24 mpg highway). That may not sound impressive, but it is a bit better than any version of the Mercedes-AMG GT, which uses the same engine. The Aston is also rated just 1 mpg lower than the Acura NSX, and actually gets slightly better highway mileage, despite the NSX’s hybrid powertrain.

Crash test ratings from the National Highway Traffic Safety Administration (NHTSA) and Insurance Institute for Highway Safety (IIHS) are not available at this time.

Of the 200 Vantage AMRs slated for production, 59 will be “Vantage 59” models, and we’d consider getting one of those. This special edition of a special edition commemorates Aston Martin’s 1959 victory at the 24 Hours of Le Mans – the British automaker’s sole win at the legendary French race. Vantage 59 models get a snappy Stirling Green and Lime exterior. It’s priced at $204,995 – a $25,000 premium – but low production will make it rare, and potentially collectible. In the meantime, you’ll stand out more at your local Cars and Coffee.

Like the manual transmission, the 2020 Aston Martin Vantage AMR itself doesn’t make much sense. If you want to spend six figures on a performance car with a hint of luxury, the Audi R8, Mercedes-AMG GT, and Porsche 911 Turbo are already excellent options, supported by more robust dealer networks. The Nissan GT-R and Acura NSX offer more technological takes on the same concept. A V8 Jaguar F-Type will offer similar thrills at a lower price, and so will the upcoming 2020 Corvette Stingray.

But a sports car is not a rational purchase. Everything about the Vantage AMR, from the way it looks, to the sound of its engine, to the way it invites a driver to fling it through corners, exemplifies the point of buying a sports car: to drive for its own sake, not just to get from place to place. The manual transmission was the missing piece of that puzzle, adding another bit of driver involvement that elevates the Vantage into something truly special.