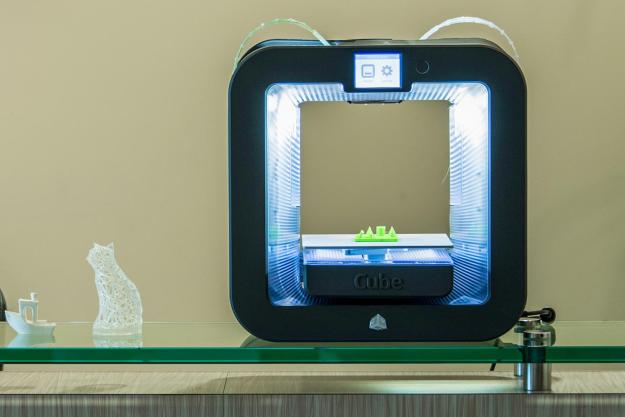 “The Cube 3 is one of the most feature-packed printers you can get for under $1,000, but its hit-or-miss performance can be frustrating.”

As with beer, steaks, and roofing contractors, you get what you pay for when it comes to 3D printers. Fancy features come at a price, and if you want things like dual extruders and touchscreens on your printer, you’ve got to dish out big bucks — unless of course you get yourself a Cube 3. Designed by 3D Systems, this printer offers a range of high-end features for under $1,000.

It almost seems too good to be true, so we got our hands on one and put it to the test.

For a printer with a price tag this low, the Cube 3 boasts some incredible specs. In addition to a neat, fully-enclosed design, the printer is equipped with two extruders, a max resolution of 70 microns, Wi-Fi connectivity, and a built-in touchscreen for navigation. You’d be hard pressed to find some of these things on a $3,000 printer, so seeing them on a printer that’s less than $1,000 is sort of like spotting a unicorn riding a centaur.

3D Systems built the Cube 3 to be user-friendly, and nothing makes this more abundantly clear than the ridiculously simple setup process. The machine is pretty much ready to go straight out of the box, and once you boot it up, it does just about everything for you — including calibration and build-plate leveling. All you’ve got to do is tap a few buttons on the machine’s built-in touchscreen display and you’re done.

The hardest part of the entire process is probably entering in your Wi-Fi password so you can connect the Cube 3 to your home network. This requires you to scroll through the alphabet to find and enter each number/letter/symbol. It’s a bit annoying, for sure, but it’s also not that difficult in the grand scheme of things. Password entry is the toughest part of the whole setup process? That’s saying something.

A lot of 3D printers don’t try to hide the fact that they’re 3D printers, but the Cube 3 does, and we appreciate it. Instead of letting all its belts, motors, and gears hang out for everyone to see, 3D Systems tucked everything away inside a neat plastic enclosure, giving the machine a clean, smooth, and inviting look. If you care about aesthetics, this printer should definitely be on your radar.

If we had to sum up Cube 3’s print performance in one word, that word would probably be “meh.”

It’s no slouch in the build-quality department, either. The plastic enclosure feels a little thin and breakable in certain places, but the printer as a whole is pretty sturdy and well-built. I had to transport it between the DT office and my house a few times, and every time I just stuck my hand through the opening and carried the thing around on my forearm. Everything on the printer is enclosed and secure, so there was never any worry of breaking it — even when I had to pack it along on the bus one day.

3D Systems also included a number of other little design features that make using the Cube 3 great, like a waste-catching system, removable build plate, and quick-change filament system. But some of them are mixed blessings.

Take the filament-spool system, for example. Cube 3 PLA comes in these nifty little pre-packaged spools that clip into the sides of the machine, and lock into the extruder (print head) with a simple twist. This makes inserting filament a breeze, but it also means that you can’t use cartridges made by anyone but 3D Systems, which is kind of annoying. It’s the exact same problem you encounter with 2D printers — once you buy the machine, it only works with one specific type of ridiculously overpriced ink cartridge. Your average spool of PLA or ABS goes for about 30 bucks, but these fancy (and admittedly convenient) spool cartridges from 3D Systems will cost you 49 bucks a pop.

Another double-edged design feature is the printer’s magnetically-attached build plate. The lack of clips makes the plate super easy to remove, which makes prying your finished objects off the plate a bit simpler. The downside, however, is that it’s not heated, and isn’t quite as secure as if it were clipped down. We had a couple printing issues (more on those in a moment) with the Cube, and as far as we can tell, they were either caused by the build plate moving ever so slightly on its magnetic anchors, or the filament not sticking to the unheated plate properly. This didn’t happen on every print, but it happened often enough that it was noteworthy.

Last but not least, there’s the network connectivity. Cube 3 can connect to your computer via Wi-Fi, which is awesome, but depending on the complexity of the object you’re trying to send, this can take anywhere from a few minutes to a few hours. More complex models take ages to transfer onto the printer over Wi-Fi, and a lot of basic ones still take a few minutes. Wireless connectivity is great, but it’s annoyingly slow most of the time.

All things considered, I’d say that while the Cube 3’s design is far from perfect, its upsides definitely outnumber its downsides.

With only a touchscreen and a single button, navigating the Cube’s user interface should come naturally to anybody who’s used a smartphone — which at this point is practically everyone.

But the software that you’ve got to to use to actually run the damn thing is terrible. We don’t usually delve too deep into software critiques on our 3D printer reviews, but this one was bad enough to warrant discussion.

With a price tag this low, the Cube 3 boasts some pretty incredible specs.

Unlike most other other 3D printers, which are designed to work with open-source slicer programs like Cura or Slic3r, Cube works exclusively with its own software program called Cubify. This isn’t necessarily a bad thing, and Cube 3 definitely isn’t the only 3D printer that runs on proprietary software — but unfortunately, the program that works with Cube 3 is a pain in the ass to use. It’s like the crappy software that comes bundled with some all-in-one printer/scanner/copiers. It looks nice, but it just doesn’t work very well, and is simplified to the point that it’s frustrating to use.

For example, after you load an STL file into your “Shelf,” the printer only seems to accept it about 50 percent of the time. The other 50 percent, it gives you an error message explaining that the model might not work with the printer, and needs to be synced again for best results. This is pretty annoying, and happened to us on multiple computers. Oddly enough, the prints would work just fine when we ignored the warning.

On other occasions, STL files would load just fine, but the program wouldn’t allow us to save the modifications we made — thereby making it impossible to print at your desired settings. There were several instances where this happened to us, and the only way to fix it was to close the program, re-open it, and try again. Sometimes it works, sometimes it doesn’t — which is insanely frustrating.

If 3D systems could get this software in order, they’d have a formidable little sub-$1,000 printer on their hands, but as it stands, this software is a huge hindrance to usability.

If we had to sum up Cube 3’s print performance in one word, that word would probably be “meh.” It’s nowhere near as accurate or detailed as higher-end printers, and the objects it produces are far from perfect — but it’s also got a few redeeming features that you typically don’t find in this price range.

The machine is pretty much ready to go straight out of the box.

For starters, it’s got two extruders, and can therefore print in two different colors or materials simultaneously. This is awesome for two reasons. First, it allows you to print two-color objects in a single go. Second, it makes it possible to print your object with one material, and print the supports with 3D Systems’ totally awesome water-soluble filament. This means you dont have to spend half an hour breaking off supports and cleaning up your print — you can just drop the finished product in a water bath and let the supports dissolve away.

That said, even with two extruders, the Cube 3’s print performance does leave a bit to be desired. The Cubify software only gives you the option to print at 200 or 70 micron layer thicknesses — so you’ve got to choose between fast and low-res, or slow and detailed. To be fair, this tradeoff exists in every 3D printer, but Cube 3 doesn’t give you any middle-of-the-road options. If you want to print at 100 microns, you’re out of luck.

Print speed and resolution are decent, but it struggles with fine details and dimensional accuracy. Dimensional accuracy was all over the place when we ran it through the 3D Benchy test, with lengths and widths of certain parts being anywhere from spot-on, to 200 microns off. You honestly wouldn’t be able to spot this with the naked eye, and it probably won’t matter if all you’re doing is printing soap dishes and candle sticks for your house – but if you need extreme precision, this probably isn’t the printer you should be using.

The biggest issue we ran into with the Cube 3 was an abundance of misprints — no matter how many times we calibrated it beforehand. If you don’t apply glue to the bed properly, the first layer sometimes doesn’t adhere to the ceramic substrate strongly enough, which can (and will) cause printing errors. But we experienced misprints even when we applied glue perfectly, so it’s a rather hit-or-miss affair. We’re not entirely sure whether to blame the machine’s unheated bed, or the fact that it might be moving slightly on its magnetic anchors, but the fact of the matter is that we got a fair number of misprints with the Cube 3, and couldn’t figure out how to avoid them.

One of the things we liked most about the Cube was how easy it is to maintain. 3D Systems put some thought into this area, and it really shows. The quick-change filament system is a breeze to maintain, and the magnetically-anchored print plate detaches easily for cleaning. It’s also got waste bins that automatically catch excess filament, and a self-calibration system that levels everything in just a couple taps. No matter how you look at it, maintenance and upkeep on the Cube 3 is a breeze.

Just don’t break it. The printer’s fully-enclosed design makes it quite difficult to disassemble, so if something goes wrong internally, you probably won’t be able to fix it yourself.

You won’t be able to upgrade it much, either. This machine isn’t designed to accommodate upgrades or accessories of any kind — except for software and firmware updates, which we sincerely hope 3D Systems rolls out soon.


The Cube 3 scores big points for great design and useful features, but the machine’s poor reliability and frustrating software make it a pain to use sometimes. It’s a good option for anyone who’s looking for an easy, non-technical way to start 3D printing things, but users seeking high-quality prints and advanced printing options would be wise to look elsewhere.

That said, this it’s also one of the most feature-packed printer’s you’ll find for less than $1,000, so even with the occasional misprint, this machine gives you a ton of bang for your buck.

Rumor suggests AMD RDNA 3 may get an unexpected upgrade