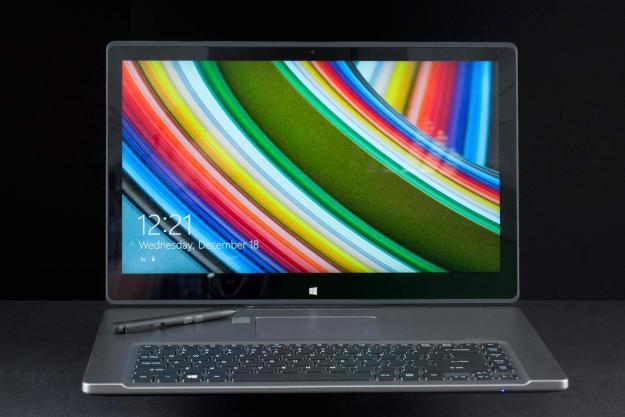 “The Acer Aspire R7 is a bit strange, but it’s also a fundamentally good convertible ultrabook sold at a great price.”

Earlier this year, Acer introduced a strange convertible ultrabook called the Aspire R7. The specifications, which included a Core i5 processor and 15.6 inch 1080p display, looked mundane, but the system packed a secret weapon; a unique “easel” stand that could bring the touchscreen closer to the user or convert the system into a plus-sized tablet. As if that weren’t odd enough, Acer also placed the touchpad behind the keyboard. The idea was that users will mostly be using the touchscreen, so accessing the touchpad is less important.

We thought the formula, while a bit odd, worked, and we awarded the first R7 with our coveted Editor’s Choice award. That old version hit the market before Intel’s 4th-gen Core processors became available, however, so it was out of date by summer of this year. Predictably, Acer has decided to freshen up the R7 with the new hardware, giving it a Core i5-4200U processor.

One of the best features of the earlier model was its price, which sat at $999 when our review was published. This new model, though it includes a few upgrades, is sold for $100 less. An improved version of an award-winning laptop that costs less than the preceding model seems like a sure bet, but there are also new competitors like the Yoga 2 Pro and revised Dell XPS 12 to contend with. Is the Acer R7 still a good bet?

As solid as before

The Acer Aspire R7’s unique hinge suggests that it might directly compete with PC tablets and small convertibles, but a glance at the Acer’s size dispels that notion. This is a large ultrabook with a 15.6” display, and as such, it feels like a small all-in-one rather than a road warrior. Once your expectations are adjusted, however, the laptop is likely to exceed them. Every surface feels solid and the design, though basic, is sleeker and more attractive than most sub-$1,000 ultrabooks.

While the chassis is robust, the star of the show is undoubtedly the unique easel stand. Rather than holding the display at the bottom, as with most laptops, the stand attaches at the display’s center, like a desktop monitor. This means height and tilt can be significantly adjusted and the screen can be moved forward for better touch access. You can even move the screen over the keyboard, turning the R7 into a 15.6” PC tablet.

A hinge like this would be easy to get wrong; it could be too complex, too flimsy, or too difficult to move. Fortunately, Acer has nailed the feel. There’s enough resistance to keep the screen from moving when used, but not so much that adjustments become difficult.

Connectivity is about average for a 15.6 inch ultrabook. Two USB 3.0 ports on the left flank are joined by a single USB 2.0 port on the right. HDMI and a combo headphone/microphone jack are also available. There’s also an “Acer Converter Port” which can be used to attach some compatible adapters, such as Ethernet. While the adapters provide options, switching that proprietary port for USB or even Thunderbolt would have been a better choice.

Pleasing to use, however you use it

As mentioned earlier, the Aspire R7 deviates from normal laptop design by placing the touchpad behind the keyboard. This may seem odd, but it’s actually a rather smart decision, because doing so makes it possible to bring the touchscreen closer to the user.

Those who still want to use a cursor should plan on getting an external mouse; the touchpad, though it works well and boasts a surface that’s four inches wide and three inches tall, is meant only to be used as a backup.

Keyboard quality is respectable. The layout is large and the island-style keys provide a firm, tactile click when fully depressed, though competitors like Lenovo often provide a bit more travel. Back-lighting is standard and offers two brightness levels, neither of which results in much light leak.

An optional feature new to the revised R7 is an available digitizer stylus. Acer seems to think this is big news (as if the easel stand wasn’t enough already), but in practice it won’t matter to most buyers because using a finger is easier in most situations. Still, digital artists will find this extra to be valuable, and the pen’s $49 price tag is reasonable.

The 1080p touchscreen was one of the original R7’s best features, and that hasn’t changed with the new model. Our testing found the panel capable of producing 96 percent of the sRGB gamut. Contrast was measured at 780:1 when at maximum brightness and black levels proved a bit better than average.

All of these numbers add up to a vivid picture that makes movies and games look their best. A glossy coat is used to provide maximum contrast, resulting in some reflection, but the backlight puts out enough light to overcome the problem in most situations. Even outdoor use is possible, though it’s not the best experience.

The R7’s excellent image quality is backed up by strong built-in speakers that can easily fill a room with sound that’s relatively rich, smooth and free of distortion. While a good pair of external speakers or headphones may still be an improvement, most users will find the built-in sound system perfectly adequate. Some 23-inch and 27-inch all-in-ones aren’t as enjoyable!

As we recently reported, Intel’s new 4th-gen mobile processors are not proving to be quicker than their 3rd-gen predecessors, and the Acer Aspire R7 is an excellent example. The previous model’s Core i5-3337U processor managed SiSoft Sandra Processor Arithmetic and 7-Zip decompression test scores of 39.24 GOPS and 7,497 MIPs, respectively. The new model, with a Core i5-4200U processor, managed to score only 38.74 GOPS and 6,590 MIPs.

Affordable, easy to use and reasonably quick, the Acer Aspire R7 is an ideal desktop replacement for anyone who enjoys touch.

These scores are about on par with competitors like the Lenovo Flex 14, which scored 7,087 in 7-Zip, and the Toshiba Tecra Z40, which scored 7,121. But it’s clear that updating the hardware has actually caused a slight reduction in computing power.

Storage performance is a sore point. The R7 managed a score of only 2,038 in PCMark 8’s storage benchmark, which is lower than every other system we’ve tested besides the Lenovo Flex 14. The problem is the 500GB hard drive which, though paired with a small cache solid state drive, simply can’t keep up with the raw bandwidth a 128GB or 256GB SSD provides. On the plus side however, the R7 has greater storage capacity that many of its rivals.

While the new 4th-gen Intel processor did not improve results in our compute benchmarks, it did beef up the R7’s gaming performance. We received a 3DMark Cloud Gate score of 4,365, up from 3,749, and a Fire Strike score of 600, up from 510. These numbers are solid for a system with Intel HD graphics, but don’t get too excited; the 1080p display is demanding, so modern 3D games will struggle at anything but their lowest detail preset unless in-game resolution is reduced to 1600 x 900 or 1366 x 768.

Weighing in at over five pounds and boasting a 15.6 inch display, the Acer Aspire R7 isn’t a picture of portability, though it’s also fairly light considering its size. Using this system on the go is possible, but the smaller Dell XPS 12 is a much better pick for frequent fliers.

Still, the previous model managed respectable life, and updating to a 4th-gen Core processor has only enhanced endurance. The Peacekeeper web browsing benchmark needed five hours and thirty-nine minutes to drain a full charge, and our light-load reading test extended that figure to nine hours and thirty-four minutes. That’s an increase of four hours relative to the preceding R7.

When compared to ultrabooks as a whole, though, these results are only average. Competitors like the Lenovo Flex 14 and Inspiron 14 7000 series last about an hour less in our web browsing test, but others like the HP Spectre 13t and Dell XPS 12 can last over an hour more.

The sound of records breaking

The efficiency offered by a  4th-gen Core processor does more than extend battery life. Thermal output is also improved, making it possible to offer similar performance with less heat. Acer’s R7 takes full advantage of this, dropping the maximum external temperatures at idle from 86 degrees Fahrenheit (in the previous model) to 74. Load temperatures, meanwhile, tumble from 97.3 degrees Fahrenheit to 90.1. This is the lowest reading we’ve recorded from an Intel Core – powered ultrabook. Lenovo’s Yoga 2 Pro, for reference, warms to 95 degrees at load, and the Dell XPS 12 peaks at a steamy 101.9.

This is accomplished in spite of the fan, which seems to be asleep on the job. We recorded a maximum volume of only 41 decibels at load – a new record for the ultrabook category. The fan is audible in a silent room, but moderate ambient noise renders it almost unnoticeable, and the fan only barely increases its speed and pitch when the processor is maxed.

A bit too much bloat

Acer is one of several brands which still places significant bloatware on its devices, and the R7 is no exception. The desktop comes with icons for PDF Annotator, eBay, Acer’s own online store, and Norton Online Backup. And that’s nothing compared to the Start Screen, which has 22 different apps installed, some of them from Acer, but most from other companies.

While the chassis is robust, the star of the show is undoubtedly the unique easel stand.

Thankfully, all of these apps are unobtrusive, so it’s easy to uninstall what you don’t want. The sheer volume of bloatware is a bit intimidating, however, and looks out of place on a well-built and luxurious ultrabook.

A few of the extras are useful, such as the unique “AcerTouch Tools” which allows the user to virtually scrapbook images or more accurately place a cursor among fine text. With this said, these tools aren’t something most buyers will regularly use, and users who don’t know about them may never stumble across them.

The new version of the Acer Aspire R7 isn’t much different from its predecessor. Yes, it’s a little slower and lasts quite a bit longer on a charge, but these differences are not so great that they change the character of the system.

There are some strong potential competitors, like the Dell XPS 12 and Lenovo IdeaPad Yoga 2 Pro, but we think a lot of buyers will also cross-shop this Acer with portable all-in-ones like the HP Envy Rove and regular 15.6” laptops. Though thin and light, the Acer R7 actually holds its own against the performance of such competitors while maintaining a price advantage. HP is still trying to sell the Envy Rove 20 with a Core i3 processor for $849, while Sony’s Tap 21 $999.

Whatever you’re shopping for, it’s unlikely you’ll find a better value. There are faster systems, and those that are lighter, and those that have a better keyboard or touchpad, but the R7 scores well in almost every area while maintaining a bargain price.