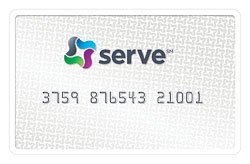 PayPal’s enviable position as the go-to digital payment platform may soon be on shaky ground. According to an official announcement released this morning, credit card giant American Express has its own payment system in the works, which will take direct aim at PayPal and other emerging payment platforms.

The service, dubbed Serve, will share many of PayPal’s features, including fund transfers, ATM withdrawals, and person-to-person payments. Serve users can connect their account to be funded by multiple accounts, including debit or credit cards, bank accounts or from another Serve account.

Serve, which can be accessed online at Serve.com, through apps for iPhone or Android-based devices, or through Facebook, will initially be accepted anywhere that takes American Express credit cards, though the company says it could expand Serve through the adoption of technologies, like the near-field communication (NFC) payment option.

“We intend to quickly evolve the Serve platform by adding new features and functionality as we learn from consumer and merchant experiences,” said American Express group president of enterprise growth Dan Schulman in a statement. “To encourage a broad cross-section of people to experience the benefits and convenience of Serve, we are working with a range of partners to integrate Serve as a payment method and deliver customized offers, and we will waive most consumer fees for the next six months.”

While the absence of fees may sound enticing, Serve isn’t free: AmEx will charge 2.9 percent plus $0.30 anytime money is put into a Serve account. ATM withdrawals will cost $2.00, after one free withdrawal each month. (PayPal has similar fees.)

American Express’ announcement about Serve comes just two weeks after Visa revealed that it, too, would be entering the digital payment market. Other digital payment upstarts that have PayPals number are Venmo and Square.

News of Serve’s launch comes only hours after news that Google, Mastercard and CitiGroup plan to team up to test NFC “digital wallet” technology in select cities.

The best accounting software for your small business

ExpressVPN vs. CyberGhost: Which is the better VPN in 2022?

ExpressVPN vs. Surfshark: Which is the better VPN in 2022?

NordVPN vs. ExpressVPN: Which VPN is best for you?