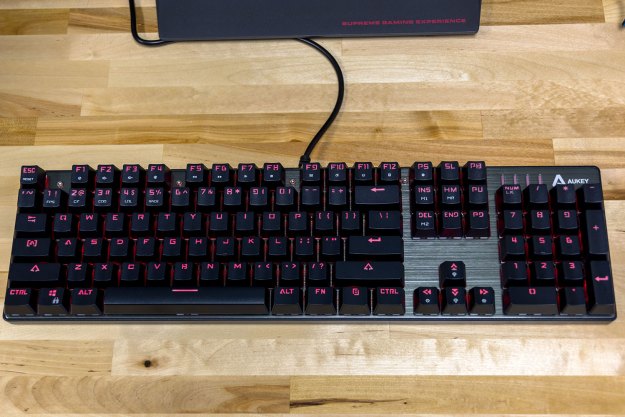 “Aukey's KM-G3 is a sleek mechanical keyboard that targets PC gamers, but should be a hit with anyone.”

Aukey isn’t quite as well-known in the PC gaming industry as Razer, Logitech, Corsair, and Roccat. In fact, scan through the company’s device portfolio and you’ll find camera lenses, car audio kits, charging stations, drones, and even VR headsets. Dip even further into the company’s “Gaming Gear” section and you’ll see laptop coolers, wireless controllers, gaming mice, and just about anything else you could want.

The company is obviously pushing its way into the PC gaming industry to become a reliable brand name like those we’ve come to know and love over the years. However, right now, it’s mechanical keyboard portfolio is seemingly targeting customers who buy mostly on price.

A scan on Amazon shows a price range between $25 and $65, and the company’s new KM-G3 sits on the higher price tier. But in spite of budget pricing, Aukey’s KM-G3 mechanical keyboard is a great full-size 104-key peripheral that’s shouldn’t be overlooked.

A mechanical keyboard aliens could love

The KM-G3 appears to be a rebrand of the Motospeed Inflictor CK104 mechanical keyboard, which is sold in Silver, Red, and Rose Gold flavors. The CK104 also comes packed with Outemu Blue or Outemu Red switches, depending on the model. The Aukey KM-G3 version is only sold in Silver, and doesn’t provide an Outemu Red switch option. We will talk more about these switches shortly.

Aukey picked a silver faceplate for the KM-G3 while the key caps, the outside lining, and the bottom panel are all black. This makes for an interesting design when it comes to illumination, as the metallic finish helps scatter the colorful backlighting between the keys. This color scheme also provides a futuristic look unlike other gaming keyboards on the market.

Aukey has kept size to a minimum, providing just enough physical space to serve as a foundation for the keys. Users won’t see a palm rest, and the surrounding bezel measures more than one eighth of an inch on all sides. The keyboard measures 4.6 inches from front to back, 17 inches wide, 0.5 inches in height at the front (bottom to faceplate) and 0.75 inches in height on the back.

It’s attractive and affordable, but there’s nothing cheap about its quality.

This minimalistic design means more backlight illumination. Save for the key caps, the switches are not covered by the keyboard chassis; the switches aren’t embedded in the keyboard chassis itself. Instead, the LEDs shine through the clear switches and pour out across the silver faceplate and around the key caps. For those looking for a dazzling keyboard to illuminate their desktop, this should be a great candidate.

On the bottom, the keyboard sports two rubber pads towards the front and two foldable “legs” in the back measuring a half-inch tall. Four indicators reside above the number pad area that blend in with the current color scheme and effect when not in use. Otherwise, each indicator lights up in an “alien” blue color when the user activates number lock, scroll lock, caps lock, and/or the Windows key lock.

What exactly is an Outemu switch anyway?

The Outemu Blue RGB switch used by Aukey is a low-cost clone of the Cherry MX Blue RGB switch. That means users can easily remove the current caps and replace them with an entirely new Cherry MX-compatible set. Some of the cap sets you can find on Amazon include backlit golden metal, lime green, and a rainbow gradient.

Here’s a look at the hardware comparison between the Outemu and Cherry MX models:

Generally, mechanical keyboard switch features are defined by a specific color. A “blue” switch means that it requires 60cN of force to actuate the keystroke, and typically provides a distinct, audible “clicky” tactile bump on the way down. They’re more in tune with the standard mechanical keyboard switch for general typing, as opposed to “red” switches targeting PC gamers. “Red” models feel smoother and faster, requiring 45cN of force to actuate the keystroke. They’re also not quite as noisy.

So, why not use Red switches in this keyboard? Good question. A pack of 10 is seemingly no more expensive than a pack of Blue. Aukey currently sells five “KM-G” mechanical keyboards, and the company seemingly relies specifically on Blue and Brown switches:

While the Red switches might be more appropriate, there’s an audience for “clicky” keys in the PC gaming community, and these Blue switches fit the bill.  Their responsiveness isn’t quite as sensitive as what we saw with Logitech’s G Pro tenkeyless mechanical keyboard for eSports, but the KM-G3 makes up for that by providing a software-free experience.

Because there’s software, all changes to the keyboard tied to the Function (FN) key and on-board Flash storage. Finding out how to customize the keyboard requires a trip online and hunting down the manual to see how this keyboard ticks.

According to both manuals, there are ten lighting effects users can cycle through by typing FN + INS: Full Backlight, Breathing, Selective, Color Cycling, Reactive Typing, Wave, Snake Marquee, Ripple, Circle, and Rainbow. If the keyboard is set to Full Backlight, users can switch between seven static colors by typing FN + DEL. Hitting the FN + INS keys will toggle the RGB lighting on and off. Aukey provides visual demos of six lighting effects here.

There’s an audience for “clicky” keys in the PC gaming community.

Selective mode consists of five pre-configured settings clearly printed on the first five horizontal number keys: first-person shooter (FPS), Cross Fire (CF), Call of Duty (COD), League of Legends (LOL), and Racing (Race). So, for instance, if users want to customize the FPS setting, first they type FN + 1 to load up the pre-set, and then type FN + HOME to enter customization mode. The four vertical indicators will then blink, providing a visual sign that the profile is ready for modification. After that, users repeatedly press the key they want to customize to arrive at the desired color. Re-typing FN + HOME will lock the settings.

Of course, there are other uses for the FN key outside of the gaming realm. Because there are no media keys, Aukey moved all media and Windows-based controls to the Function keys, arrow keys, and more. Each underlying function is clearly labeled on the keycaps as a single icon, such as an envelope on the F9 keycap for email, a mute icon on the F4 keycap, and so on. The keyboard can even be reset to its out-of-the-box settings if needed by typing FN + ESC.

What this keyboard really needs to make it an ideal candidate for on-the-go PC gaming (think LAN tournaments, eSports) is a detachable USB cable. As it stands now, the cord is a permanent 5.2-foot-long fixture that could eventually encounter shortage-related connectivity problems when wrapped around the keyboard too many times.

On a performance level, we can confirm that the keyboard can register at least 10 simultaneous key presses without any issues. The product pages and manuals say nothing about a specific key rollover number, although the Amazon listing does mention anti-ghosting. “Ghosting” is a term used when keyboards are unable to process more than three simultaneously pressed keys. When they are, some of the letters may not work while other letters unintentionally appear, as if typed by a ghost.

That said, we’re not sure how many simultaneous key presses this keyboard officially supports. Since it does not support on-board macros and we only have ten fingers to begin with, it’s obvious 10-key rollover ability should be perfect for PC gamers and general typists alike.

The KM-G3 catches the eye, but many PC gamers won’t go in for its software-free customization capabilities.

Of course, the general document writer or tax preparer won’t really care about anti-ghosting or what it takes to actuate a switch. That’s a huge selling point for PC gamers given that every millisecond counts when playing online. Unfortunately, there’s really no good way to measure the amount of force needed from touch to actuation, but using nickels is always fun.

To see what it takes to get a switch to actuate we used a simple method – piling on nickels. In the case of Aukey’s KM-G3, we managed to stack 13 nickels before the key accuated. As a reference, the custom switches used in the previously reviewed Logitech G Pro “tenkeyless” mechanical keyboard only required a stack of 10 nickels to actuate the switch.

In other words, the switches aren’t highly sensitive, but they don’t require a firm mash of a finger either. When using Logitech’s keyboard in DOOM, sidestepping and general movement felt quicker and thus more responsive to our movement commands due to the keyboard’s in-house switches, fast processing time, and super-quick connection to the PC. Of course, the Logitech G Pro retails for $130, so it may be somewhat unfair to compare it to Aukey’s solution that sells more than half the price.

Finally, with the small KM-G3 price tag comes a big warranty provided by Aukey. The keyboard is covered for 24 months once users register the product with the company. However, there is a catch: it’s valid only if customers purchased the keyboard from AukeyDirect on Amazon. “For warranty claims or inquiries, please contact support with your product model number and Amazon order number,” the company states.

The Aukey KM-G3 is a fun and highly attractive mechanical keyboard for general users and PC gamers alike. Its minimalistic design delivers a compact yet full 104-key input experience, while also amplifying its brilliant RGB illumination capabilities. It catches the eye rather quick, but many PC gamers will completely buy into the peripheral’s software-free customization capabilities.

For the price point, Aukey tried to pack plenty of features into a super-slim, 104-key peripheral. However, the sub-$60 mechanical gaming keyboard market isn’t exactly dry as a desert, with well-known and not-so-well-known competitors flooding the market with similar, compact solutions. Aukey’s stiffest competition comes in the form of Razer’s Blackwidow and Corsair’s Vengeance K65 Compact. Both keyboards are of excellent quality, yet sell for $65.

Keyboards tend to last a long time. While the Aukey doesn’t offer the more respected Cherry branded key switches, its Outemu switches still claim a lifespan of 50 million actuations. This keyboard could last a decade or more if it’s not abused.

Yes, if you want an inexpensive mechanical keyboard that’s good for both gaming and general use. Aukey’s KM-G3 isn’t perfect, but it’s affordable and fits nicely into a casual gaming niche that many keyboards fail to serve.

Best gaming laptop deals: Save on Alienware, Razer and more
The best Intel processors for 2022
This killer Black Friday deal on an RTX 3060 gaming laptop is still available
Best Dell XPS deals: Save on XPS 13, XPS 15 and XPS 17
Here’s what I’ve learned after using the Quest Pro for one month
Nvidia may finally admit its major mistake with the RTX 4080
These Chrome extensions will put cash-saving coupons right in your browser
The best GPU benchmarking software
Today’s best deals: TVs, laptops, iPads, robot vacuums and more
Cooler Master’s Orb X gaming pod is futuristic and utterly absurd
Get this Lenovo gaming laptop with an RTX 3050 Ti for $550 today
HP’s popular Spectre x360 2-in-1 laptop is $350 off right now
This massive 17-inch Chromebook is under $200 at Best Buy