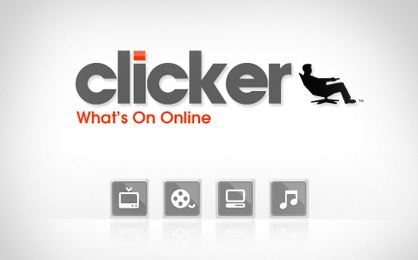 Web surfing is becoming more like channel surfing as television shows, movies and music videos pour onto the Internet.

That’s why pointing people to their favorite TV episodes and flicks could emerge as next big opportunity in Web navigation. Former online search executive Jim Lanzone is hoping to lead the way with Clicker.com, a free service debuting Thursday.

“We are trying to build the ultimate programming guide for the coming age of Internet TV,” said Lanzone, who ran IAC/InterActiveCorp’s Ask.com until last year.

After two months of invitation-only testing, Clicker is welcoming all comers to peruse an index that includes 400,000 TV episodes, 50,000 music videos and roughly 30,000 movies that are part of Netflix’s streaming library or Amazon.com’s video store.

Streaming from Netflix requires a subscription while Amazon.com sells or rents video downloads. Most of the other material in Clicker’s database is shown for free.

The selections range from television staples such as “Seinfeld” to Web-only productions such as “The Basketball Jones.”

Other services already have been trying to cut through the Internet’s video clutter. Clicker will vie against at least two similar sites, Channels.com and BuddyTV.com, as well as video search options offered by Google Inc., Yahoo Inc., Microsoft Corp. and AOL.

That’s nothing new for Lanzone. As Ask.com’s CEO during a two-year stint that ended in January 2008, Lanzone became accustomed to battling Internet search’s big three — Google, Yahoo and Microsoft.

Although Ask.com’s audience remained well behind those of the larger rivals, Lanzone oversaw a team that came up with some search innovations that were good enough to be copied by Google.

Clicker is trying to set itself apart by combining elements of a search engine, a digital video recorder and a forum that allows people to recommend shows to one another. Clicker also will evoke memories of an old-fashioned TV guide, with episode summaries that include the year the video was made.

To make money, Clicker will rely on advertising and eventually may try to collect commissions from video producers that charge to watch content.

The site is part of Clicker Media Inc., a Los Angeles startup that has raised $8 million from such investors as venture capital firms Benchmark Capital and Redpoint Ventures.

Topics
The 6 biggest problems with ChatGPT right now
How to delete a page in Word
These 7 AI creation tools show how much AI can really do
How to recall an email in Outlook
The best Mac webcams for 2023
The best external hard drives for 2023
The best touchscreen monitors in 2023
A key question for the Mac Pro has been answered — and it’s not good news
Apple Mac Mini M2 vs. M1: don’t make a buying mistake
HP Envy x360 13 vs. Dell XPS 13: the best tiny laptop?
Apple’s $600 M2 Mac mini obliterates the $6,000 Mac Pro
Here’s how ChatGPT could solve its major plagiarism problem
Apple spring event: massive Mac launch, XR headset, and more