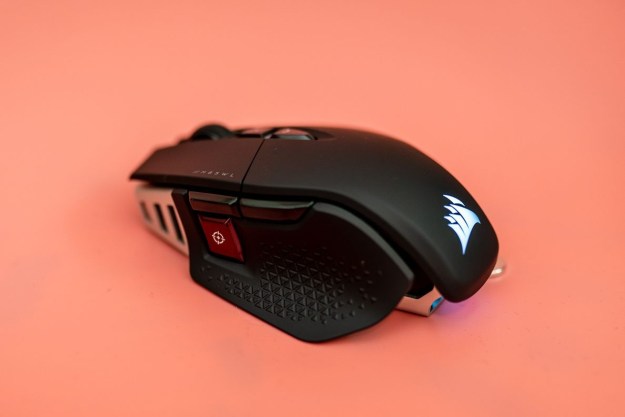 “The Corsair M65 RGB Ultra is cutting-edge gaming tech in an iconic design.”

Corsair’s M65 is an FPS (first-person shooter) icon in the world of gaming mice. After seven years and multiple iterations, Corsair has shown that the M65 design isn’t going anywhere. The M65 RGB Ultra Wireless is something new, though. It’s the first time the design has gone wireless, and at a price the range has never seen before.

Although the M65 has never been a budget option, the first wireless variant pushes up the price to nearly twice that of the wired version, finally nudging the mouse over the $100 mark.

Corsair has made some version of the M65 since it launched in 2014. And for the most part, the design has stayed the same. It’s a tall, stubby mouse with a pronounced bump in the back that feels perfect for palm and claw grip. I use palm grip, and the M65 Ultra Wireless gives me just enough to hold onto.

Like previous versions, this one is constructed with an aluminum frame that lends a sense of heft to the mouse. Unlike the previous Elite version, the M65 Ultra Wireless comes with a textured surface on both sides, similar to Corsair’s Dark Pro RGB. I love the addition, as it brings just a hair of grip to an otherwise matte design.

While 18 grams may not sound like much, it makes a world of difference.

Just like its wired counterpart, the M65 Ultra Wireless comes with six removeable weights. They’re split into three sections, so you can choose to have the internal weight, the external weight, both, or neither. In addition to shifting the weight from 110 grams up to 128 grams, the weights are also distributed to adjust the center of gravity.

While 18 grams may not sound like much, it makes a world of difference. The M65 Ultra Wireless is a heavy mouse to begin with, especially with all of the weights in. There’s a lot of room for adjustment here, as long as you like a heavy mouse (something like the Razer Orochi V2 is better if you want a lighter option).

The weight makes the M65 Ultra Wireless feel like a unit, too. If you’ve used any of the past M65 iterations, you already know what I’m talking about. This is a hefty mouse that feels like it can stand up to pressure, unlike a lot of ultralight esports mice that feel like they’ll fly away if you don’t grip them tightly enough.

Still, it’s important to recognize that the weight isn’t for everyone. Although the M65 has adjustable weight, it’s heavy regardless, just like the Logitech G502 Hero with its removeable weights. The M65 Ultra Wireless is heavier than the wired M65 Elite, too, by 13 grams (though lighter than M65 Pro by five grams).

The M65 Ultra Wireless comes with eight programmable buttons, which is perfect for me. It’s a couple of more buttons than the Corsair Sabre Pro Wireless, but still fewer than an MMO behemoth like the Logitech G600. In addition to left- and right-click, you have access to forward and back thumb buttons, up and down DPI adjustment, and the thumb sniper button that’s iconic to the M65 range.

Optical switches don’t have that problem. They use light instead of a physical switch, which eliminates debounce delay. All told, this delay is so small that most people won’t ever notice it. However, optical switches are technically faster, so if you need a sanity check that someone in Valorant actually killed you, the M65 Ultra Wireless offers one.

It’s the feel of the optical switch that has me hung up.  There are only a few mice with optical switches — namely the SteelSeries Prime and Razer Basilisk V3 — so I’d recommend trying one of them in-store before picking up the M65 Ultra Wireless. It isn’t a bad feeling, but optical switches don’t offer the same click as a mechanical switch — it’s almost as if there’s a dampener.

Besides a switch upgrade, the M65 Ultra Wireless comes with a sensor upgrade. It features the 26K DPI Marksman sensor, just like the Corsair Sabre Pro Wireless. That’s above even the 25.6K DPI sensor on the Logitech G Pro X. Like the optical switches, a higher DPI sensor is technically more accurate even if it’s not relevant for most people.

The 2,000Hz polling rate is relevant. Moving from 1,000Hz — which is typical of wireless gaming mice — to 2,000Hz cuts down the response time to 0.5ms. From the buttons to the sensor to the polling rate, the M65 Ultra Wireless is set up to give you an advantage, no matter how small.

Like the Corsair Sabre Pro Wireless, the M65 Ultra Wireless comes with Bluetooth and Corsair’s Slipstream wireless technology. You can toggle between them on the bottom of the mouse, which I found myself doing often, swapping over to a home theater setup with the M65 and my Logitech G915 TKL.

The M65 Ultra Wireless offers exactly what I’m looking for in a wireless gaming mouse.

Without any lighting, Corsair claims up to 120 hours of battery life when using Bluetooth (90 hours when using Slipstream). The mouse automatically sleeps after 15 minutes, however, so you can reasonably use the M65 for weeks without a charge. Compared to my Razer Viper Ultimate, I didn’t feel the charging bug nearly as often. And when I did, the USB-C port for charging meant I was rarely without a spare cable.

The M65 Ultra Wireless offers exactly what I’m looking for in a wireless gaming mouse. Quick switching between 2.4GHz wireless and Bluetooth makes the mouse versatile for different setups, and the battery lasts long enough to never feel like an issue. USB-C is a big win, too, unlike mice like the Razer Viper Ultimate that are stuck with a micro USB port.

Corsair’s iCue software is a reason to pick up the M65 Ultra Wireless. Like Logitech’s G Hub and Razer’s Chroma, you can customize the RGB lighting and change button assignments in iCue, including mapping absurd macro functions to any of the buttons. Once you have everything set, you can store your DPI, lighting, and macro profile on the mouse to use it free of iCue.

Corsair’s iCue is an essential part of the M65 Ultra Wireless.

There isn’t much in the way of lighting, with the M65 Ultra Wireless sporting a single zone for the logo on the back. Still, iCue allows you to access custom lighting effects like rain or a temperature sensor. I’m partial to static lighting across my rig, which iCue segments into a separate, simplified section.

The most intriguing part of iCue with the M65 Ultra Wireless is the gyroscope. The six-axis gyroscope allows you to configure liftoff detection, but it also opens up the possibility for gestures. The M65 Ultra Wireless includes forward, back, left, and right tilt gestures, which you can map to any key or macro just like a normal button.

And to my surprise, it works. I don’t imagine I’ll ever use the tilt function — immediately after setting it up, I accidently sent the mouse into a frenzy after flipping it upside down — but it works. There are some uses for it, too, like using Alt + Tab to cycle through windows or mapping a key like PrintScreen that you may have to hunt for otherwise.

Corsair’s iCue is an essential part of the M65 Ultra Wireless. It goes far beyond buttons and lighting, allowing you to access to unique features like gestures and critical settings like when the mouse goes to sleep.

The Corsair M65 Ultra Wireless squarely targets two other mice — the Logitech G Pro and Razer Viper Ultimate. The Viper Ultimate is about $20 more expensive, while the M65 and G Pro are both $130. Performance-wise, there isn’t a big difference between these three mice, so it comes down to features and preference.

Corsair’s mouse has a few perks on that front. The optical switches are faster, it includes a massive battery, and it comes with USB-C for charging. I love the design and feel of the M65 as well, though a lot of that comes down to hand size and how you hold your mouse.

I would have liked a slightly cheaper price — around $110 like the Sabre Pro Wireless — but the M65 still feels a step ahead of the competition.

You can save big with a wire, too. Corsair’s wired M65 is $60 cheaper, and there are options like the SteelSeries Rival 3 for around $30.

Yes. The M65 Ultra Wireless is an excellent wireless gaming mouse. It comes with the same premium features as similar mice like the Razer Viper Ultimate and Logitech G Pro X Superlight. However, you can save big with budget wireless options like the Logitech G305 or by picking up the wired version.

The best mouse for 2022: Top wireless mice tested and compared