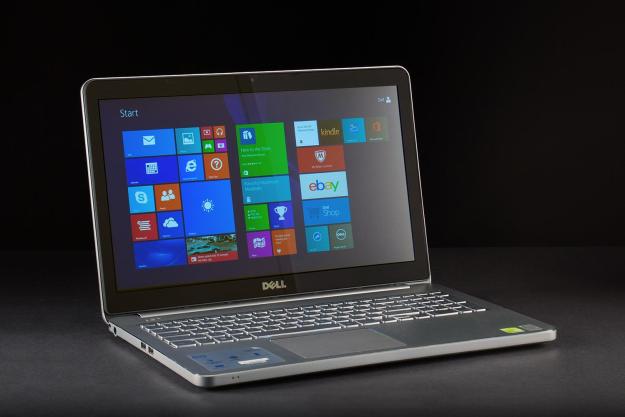 “The Dell Inspiron 15 7000 Series is an excellent desktop replacement. We just wish it would go on a diet.”

Ultrabooks have had plenty of trouble reaching their sales targets, but that doesn’t mean they haven’t changed the industry.

Even today’s least expensive laptops are lighter and thinner than ever before, and most are equipped with an efficient Intel U-Series processor. Often times, the processor is identical to what’s commonly found in Ultrabooks that are sold for several hundred dollars more.

This is the everyman’s performance notebook – and one of the best desktop replacements sold today.

There have been compromises made, however. Ports are gradually going extinct, keyboards have shrunk, and design has come to favor portability over durability. Some buyers wish for the more functional laptops of old which, though bulkier, had more to offer.

What if you could have the best of both worlds, though? That’s the promise made by the Dell Inspiron 15 7000 Series, an Ultrabook that truly has it all. Though it boasts an efficient processor, the Inspiron 15 also offers a full keyboard, complete with a numpad and plenty of USB ports.

So is Dell’s mix of new and old-school design the perfect do-it-all machine?

2010 called, and it wants its laptop back

Though it’s slapped with the Ultrabook label, the Dell Inspiron 15 7000 Series isn’t at all similar to the 13-inch and 14-inch systems that normally carry this title. The system’s chassis is nine-tenths of an inch thick, and weighs in at a hefty 5.7 pounds. While that’s not absurd for a 15.6-inch laptop, it is on the high side. A MacBook Pro 15, by contrast, weighs about 4.5 pounds.

The rubber feet on the bottom of the laptop add another tenth of an inch, which means the Inspiron is an inch thick when placed on a desktop.

On the plus side, the added bulk also contributes to the 7000’s higher build quality. The chassis is mostly constructed of aluminum, and feels robust despite Dell’s decision not to use a unibody design. Panel gaps are visible if you look for them, but mostly reside on the bottom of the system, so they’re usually out of sight. Even the display, which is attached to the system via a massive hinge, feels sturdy when handled.

Style, however, is not this system’s strong suit. The color scheme consists of silver, silver and more silver. Dell is clearly going for the professional look, but in doing so, they’ve created one of the most generic-looking laptops on the market. There’s nothing about the Inspiron 15 that screams modern; an uneducated observer could easily be fooled into thinking that it was released several years ago.

At least there are lots of ports! We counted four USB 3.0 connections, joined by HDMI, Ethernet, a memory card reader, and a combo headphone/microphone jack. Wireless connectivity includes 802.11 b/g/n Wi-Fi, Bluetooth 4.0 and an optional external USB modem. On the whole, this is a strong set of ports and connectivity features for a modern laptop. However, we’d like to see 802.11ac offered as a standard feature, or at least as a configurable option.

The Dell Inspiron 15 7000 Series has a massive keyboard with a numpad included. While the numpad keys are slightly smaller than the primary alphanumeric keys, the difference in size is barely noticeable, and the layout is spacious. There’s a ton of room to stretch out your fingers while typing.

Touch-typists will find the keyboard to be passable, but not overwhelmingly pleasurable. Vague key feel hampers tactile response, but the problem wasn’t severe enough to induce extra errors. The backlight, which provides two brightness settings, is standard. Plus, the keyboard is spill-resistant.

The touchpad, which measures just over four inches wide and about three inches deep, provides a more responsive experience than most. We had few problems with accidental activation of the more finicky features in Windows, like the Charms bar and Metro app multi-tasking, and found multi-touch scrolling to be buttery smooth. The integrated left/right mouse buttons aren’t perfect, but they do their job without slowing the user down.

With the touchpad so close, and the touchscreen so far away, the former generally gets used more often than the latter. That’s a shame, because the touchscreen works well, and its Gorilla Glass finish provides a smooth, pleasing feel.

The entry-level version of the Inspiron 15 7000 Series can only be had with a 1366×768 touchscreen, but our top-tier review unit was upgraded with a 1080p display. The screen can render 98 percent of the sRGB gamut, and 75 percent of Adobe RGB. Maximum contrast was 620:1 with brightness set to max. These numbers fall short of the Acer Aspire R7, which reached a contrast ratio of 780:1, but beat the Dell XPS 15, which returned a contrast ratio of only 360:1.

In some areas, like display quality and battery life, the Inspiron actually out-performs the XPS 15.

Reflections can be an issue here though. Corning Gorilla Glass guards the Inspiron 15 7000 Series’ display, and contributes to a smooth touchscreen experience. However, its high-glare finish turns the system into a mirror. The backlight output is just 229 lux at maximum, which isn’t enough to overpower a bright environment.

Audio quality is adequate. Playback is smooth and balanced, even at maximum volume. The speakers are far from the loudest we’ve heard. Bass is lacking, but the speakers can still adequately fill a room with sound. External speakers or headphones are preferable, but the built-in sound will do if neither is an option.

Ultrabook performance with a twist

We first threw SiSoft Sandra’s Processor Arithmetic test at the Inspiron, which is a balanced benchmark that provides a strong indication of how a laptop performs in everyday apps. Here’s how it held up.

As you can see, the Dell Inspiron 15 7000 Series fell far behind the Dell XPS 15, which was equipped with a quad-core CPU. Still, the Inspiron managed to beat the Acer Aspire R7 and the HP 820 G1, both of which had Core i5-4200U processors.

We also tested processor performance with 7-Zip, a heavily multi-threaded benchmark that simulates file compression and de-compression. In this test, the Inspiron 15 7000 Series, which scored 6,688, was stomped on by the Dell XPS 15, which scored 17,293. The HP 820 G1 managed to slightly outperform the Inspiron with a score of 7,062, while the Acer Aspire R7 trailed the whole pack with its score of 6,590.

Our review unit had a 1 TB hybrid hard drive, combining a solid state cache with a traditional mechanical disk. This led the system to a score of 2,991 in PCMark 8’s storage benchmark. This figure is significantly behind the more expensive Dell XPS 15, which scored 4,929, though the XPS 15 had a full-fledged SSD. The HP 820 G1 and the Acer Aspire R7, both of which had mechanical drives without an SSD cache, scored 2,332 and 2,082 respectively.

The twist in the Inspiron’s performance comes from the GT 750M graphics chip, which is available only on the top-tier version of the laptop. So how does it compare to other 15.6-inch systems?

The Acer and HP, which lean on Intel HD integrated graphics, eat dust in our 3DMark benchmarks. Only the Dell XPS 15, which has the same GT 750M, but a much quicker processor, is faster here. The Inspiron 15 7000 Series isn’t a gaming laptop, but it is powerful enough to play modern games smoothly.

To get a clearer handle on the system’s gaming capabilities, we took League of Legends for a spin, which is among the world’s most popular PC games. At Medium detail, the game ran at an average of 109 frames per second, with a maximum of 138 and minimum of 71. Bumping detail up to Very High cuts the average to a still-excellent 72 FPS, with a maximum of 98 and a minimum of 44.

These results are the best we’ve recorded from a laptop playing at its native resolution since we started using League of Legends as a benchmark. The Dell XPS 15, though technically more powerful, can barely play the game because of its significantly higher 3200×1800 resolution. You can lower the resolution for better performance of course, but by doing so, you sacrifice visual fidelity.

15.6-inch laptops usually don’t provide great endurance, because their larger displays and more powerful hardware suck down more juice. The only way to counter that is by stuffing them with a larger battery, and that’s exactly what Dell has done here. All versions of the Inspiron 15 7000 Series ship with a 58 watt-hour unit.

That helped the system achieve an impressive six hours and forty-two minutes of endurance in the Peacekeeper Web browsing benchmark. The Dell XPS 15 managed six hours and nine minutes, the HP 820 G1 gave out after five hours and forty-three minutes, and the Acer Aspire R7 brought up the rear, lasting five hours and thirty-nine minutes. Only long-lasting Ultrabooks like the Acer Travelmate P645, which endured eight hours and two minutes in Peacekeeper, offers more life.

Our watt-meter caught the Inspiron 15 consuming a modest 12 watts at idle, with the display set to 100 percent. This figure compares well to other 15-inchers, like the Acer Aspire R7 which, though it lacks a powerful GPU, consumed only one watt less (11) at idle.

At load, however, power draw spiked as high as 67 watts. This is less than the Dell XPS 15, which needed 87 watts, but more than every other laptop we’ve recently reviewed. Only gaming laptops need more juice than Dell’s latest Inspiron.

Quiet, except when it’s not

In most situations, the Inspiron 15 7000 Series is a serene machine. It generates just 33.7 decibels at idle, and 39.2 dB at full processor load, which are figures that compare well to everything in the segment. For instance, the Acer Aspire R7 emits 40.4 dB at idle, and the Dell XPS 15 puts out 35.5 dB in this state.

The Inspiron 15 7000 Series was loud enough to become annoying after just a few minutes.

At load, the story changes, with the system’s subtle purr morphing into a 48.3 dB roar that’s easily noticeable, even in a loud room. Though not as noisy as the worst offenders, like the Dell XPS 15 (which emitted 51.1 dB) or the MSI GX70 (which put out 49.4dB), the Inspiron 15 7000 Series was loud enough to become annoying after just a few minutes.

The fan kept the system cool, at least. We recorded external temperatures no higher than 78.2 degrees Fahrenheit at idle, and that figure leapt to only 102.1 degrees at load.

The Inspiron brand name, which is typically reserved for Dell’s entry-level systems, doesn’t do the Inspiron 15 7000 Series justice. This system is undoubtedly the reason why the XPS 15 is so expensive. In some areas, like display quality and battery life, the Inspiron actually out-performs the XPS 15. The fact that it does so at an as-tested price of $1,149 is stunning, and is yet more evidence that emptying your savings for the most expensive laptop on the market is often a losing strategy.

There are a few drawbacks, however. The system is bulky and hefty, making for a poor travel companion, despite its excellent battery life. Plus, the fan can become quite a noise-maker at heavy load. Don’t let the Ultrabook sticker fool you; this is a desktop replacement.

We can’t knock the Inspiron 15 7000 Series for being what it is though. We’re happy to see Dell offer an affordable, powerful, and well-rounded system. This is the everyman’s performance notebook – and one of the best desktop replacements sold today.