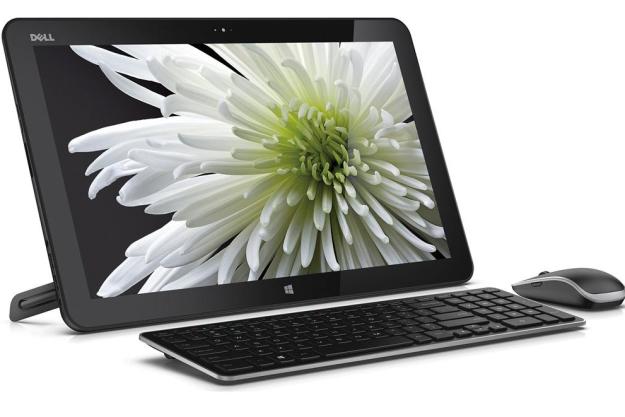 “The XPS 18 is too large to work as a tablet, yet too small to compete with premium all-in-ones.”

After a few years spent off the radar, the cliché “Go big or go home!” is making a comeback thanks to consumer electronics. The “bigger-is-better” philosophy can be found in smartphones, televisions, and all-in-one PCs. While the consumers a decade ago fretted about performance, today’s buyers instead want bigger, better, bolder displays. And as with any trend, there are extremes – like the Dell XPS 18.

The Dell XPS 18 is a hybrid all-in-one PC, which means it’s a big tablet with a built-in stand. And no, the name doesn’t lie; it does indeed pack an 18.4-inch display. If that number doesn’t help you put the size into perspective, consider this alternative explanation: the XPS 18 is about twice as wide as an iPad, four inches taller, and four times heavier.

Increasing size allows for not only a bigger display but also faster hardware. While small Windows tablets usually make do with the slow Intel Atom processor, our XPS 18 review unit arrived with a Core i5-3337U processor and 8GB of RAM.

However, these components quickly add to the price. Though it starts at $899, that price does not include the optional stand, which is an extra $99. An XPS 18 with our as-tested specs costs an alarming $1,449 (with stand), which isn’t much less than the 27-inch Lenovo Horizon. Does Dell’s versatility make up for its substantial price?

Like other all-in-one hybrids built for tablet or table use, the Dell XPS 18 uses a rugged rubberized outer frame that provides some impact protection and a grippy surface. Functionally, this makes sense; but it leads to a bland look. The black bezel transitions to a matte black chassis with no design flourishes aside from a chrome Dell logo.

That’s right; despite a $99 price tag, the stand doesn’t offer a single port of any kind.

The power and volume buttons are located on opposite sides of the device when it’s held in landscape orientation. This would normally prove a problem when oriented in portrait, but with a display this large, there’s not much reason to ever use the device in that fashion. We do wish the buttons were recessed or more firmly sprung, however, because they’re too easy to activate accidentally.

Though usable in-hand, the XPS 18 will probably spend more time on a surface, and Dell has included four fat rubber feet to accommodate this. These provide extra traction to keep the computer from sliding. The bottom feet also extend outwards to provide support, which is why the $99 stand is optional rather than mandatory.

Dell has bundled two USB 3.0 ports in this hybrid – an impressive offering for a tablet, yet disappointing for an all-in-one. Their location isn’t ideal because Dell placed the ports exactly where the user’s left hand cradles the device when it is used as a tablet. An SD card reader and headphone jack are also included and are unfortunately located in the same area.

Don’t think the optional stand will resolve the port issue – it doesn’t add any additional ports. That’s right; despite a $99 price tag, the stand doesn’t offer a single port of any kind. That seems like a major oversight on Dell’s part, as most devices with an optional stand offer at least a couple of USB ports and sometimes HDMI-out as well.

Speaking of HDMI, you won’t find it here, nor will you find any other video output. This means there’s no way to input video from another device (a key feature for all-in-ones, as it lets them act as a small HDTV), and video-out is restricted to USB monitors, which are few in number and expensive for their size.

Lack of connectivity isn’t the only way the stand disappointed us. While sturdy and well-built, the stand doesn’t include any mechanism to physically grasp the XPS 18; it simply rests in the stand using good old-fashioned gravity. That’s fine for people who don’t have children (or cats), but for those who do … well, let’s just say the stand doesn’t inspire confidence.

At least Dell bundled the XPS 18 with a quality keyboard and mouse. Both connect via Bluetooth and ship pre-paired with the PC, so they’ll work the moment the included batteries are inserted. The keyboard has a pleasing feel and the mouse serves up three buttons alongside the scroll wheel. Most users will have no reason to replace either.

Our test equipment reported solid results from the 1080p display. Color gamut came in at 94 percent of sRGB, contrast figures were high, and black levels were low. Brightness reported near 300 nits, which is also above average.

Lenovo’s Horizon is the only competitor we’ve reviewed that bests this Dell’s display. Acer’s Aspire U is just behind the Horizon, and HP’s Spectre One has a narrower color gamut and a dim display. Small hybrids also pale in comparison – both HP’s Envy x2 and Acer’s Iconia W700 are way behind the XPS 18 in every measure except brightness, where they’re just slightly behind.

Audio quality lives up to the display as best it can. Maximum volume is loud and mid-range sounds are reasonably clear for a device of this size. Still, sound staging and bass are lacking, which means a half-way decent pair of external speakers will be a major upgrade.

This hybrid is small compared to most all-in-ones, yet it offers similar hardware. The Core i5 3337U processor is identical to what we tested in the Lenovo Horizon, and, as expected, it turned in middling performance figures. SiSoft Sandra’s Processor Arithmetic test reported 39.4 GOPS, and 7-Zip turned in a score of 7,583 MIPS. These figures aren’t mind-blowing, but they do put the XPS 18 just slightly ahead of the average Ultrabook.

PCMark 7, a benchmark that simultaneously tests multiple components, gave us the same story with a score of 4,288. That’s a good result and once again puts Dell’s hybrid all-in-one in league with a typical Ultrabook.

Poor endurance, a pitiful port selection, so so performance, and awkward chassis make this device a poor choice for any task.

We tested gaming performance with 3DMark, which taxed the Intel HD 4000 graphics processor to its limit, resulting in a Cloud Gate score of 3,689 and a Fire Strike score of 498. Both numbers are, once again, average for the hardware, but that doesn’t put the XPS 18 in good company. The 1080p display found here is clearly too much for most games to handle. Demanding games will be playable only at drastically reduced detail and resolution settings.

The figures reported here are competitive, as they sometimes exceed the Lenovo Horizon and match some standard all-in-ones like the HP Spectre One and Acer Aspire U. However, Acer’s Iconia W700, an 11.6-inch Windows tablet sold at a lower price, defeats the XPS 18 in PCMark and matches or nearly matches its score in every other test. And some large (but equally priced) all-in-ones, like Dell’s own XPS One 27, double the XPS 18’s scores.

Not every five-pound computer weighs the same

Dell’s website boasts of this hybrid’s 5-pound weight. That sounds pretty good for something with an 18-inch display; heck, most 15-inch laptops weigh more!

Yet, that figure doesn’t tell the whole story. The five-pound weight of this device becomes a problem because it is thin and large, which means the center of mass is always some distance from where the device is held. Tablet use is only comfortable with two hands on the device at all times.

And don’t think you’ll be leaving home with this thing, either. There are just a handful of padded bags large enough to hold it (conveniently, Dell sells two through its website), and, even if you do buy one, you’ll find the display so large it takes up most of the table-space at your local coffee shop. Want to use the XPS 18 for entertainment during a flight? Then you’d better have a first-class ticket.

What about battery life? A charge lasted for two hours and nine minutes in our Battery Eater stress test, which is competitive, but the light-load Reader’s Test only extended life to four hours and 26 minutes. These results exclude the XPS 18 from serious travel, even if you can find room in your bag to pack it.

That being said, we’re impressed that the battery lasts as long as it does given the figures returned during our power tests. At idle, this hybrid consumes up to 25 watts of power, and that figure can shoot up to 38 watts at load. These are excellent numbers when compared to large all-in-ones; but, compared to tablets, not so much. Acer’s Iconia W700, for example, uses as much power at full load as the XPS 18 does at idle.

Our review unit arrived with a modest assortment of pre-installed software that included McAfee Security Advisor, Amazon’s Windows 8 apps, a Dell Shop app, and two entertainment apps designed for touchscreen use. Surprisingly, McAfee did not annoy us during our testing. The app installed on the XPS 18 appears to be a simple advertisement rather than a functioning trial anti-virus.

The entertainment apps are Air Hockey, and Fingertapps, a lame retread of ground covered years ago by Rock Band. We didn’t really enjoy either app, and the Air Hockey app frequently lagged during play. Lenovo’s Horizon has Dell beat in this area.

Manufacturers are currently experimenting with many hybrid designs. Some are based on laptops, others take inspiration from all-in-ones, and all of them are testing uncharted waters. Consumers seem to want a do-it-all device, but actually delivering it is another matter. Manufacturers are firing blind in hope that a new idea will score a bull’s-eye.

The XPS 18, however, is a miss. The 18.4-inch display renders the device too large to serve as a tablet, yet also too small to compete with other high-end all-in-one PCs. Poor endurance, a pitiful port selection, so-so performance, and awkward chassis make this device a poor choice for any task. Only the display and bundled peripherals offer merit, but they’re not enough to make up for this hybrid’s many flaws.

Dell’s $899 introductory MSRP is okay, but that model has half the RAM of our review unit and a slower processor. Stepping up to our $1,349 model ($1,449 with stand) merely makes performance competitive, yet pegs the price at an absurd level.

The entire point of a hybrid is value. It provides both a tablet and PC for less than the cost of both when purchased individually. But rather than respecting this, Dell’s gone the opposite direction and priced the XPS 18 higher than a tablet and mid-range Ultrabook (or desktop PC) combined. And that just doesn’t make sense.