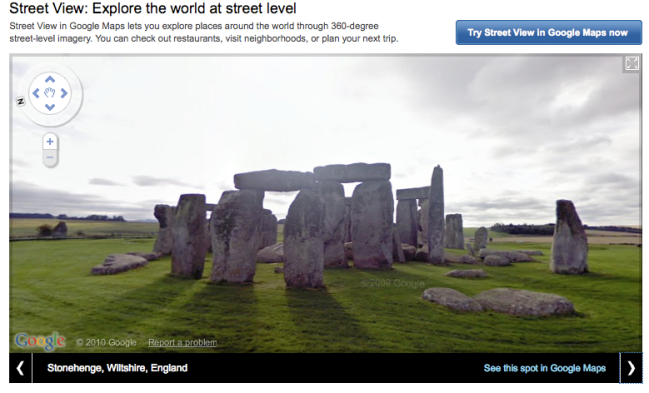 Google has updated its Street View website to showcase some of the the program’s more exotic imagery, detail exactly where Street View is available and even give insights behind the story of the mysterious “pegman.”

On Street View’s homepage, visitors are now greeted with a slideshow of some of the more high-profile destinations captured by the Street View team. Images include shots of England’s Stonehenge, South Africa’s Kirstenbosch National Botanical Garden and Japan’s Kumamoto Castle. There’s also a “7 Continents of Street View” link which displays a greater of variety of attractions around the world (yes, Street View has visited Antarctica apparently).

In the gallery section of the site, Google has arranged images by different categories including UNESCO World Heritage Sites, South African soccer stadiums and U.S landmarks.

The site also now includes information about some of the operations behind the project. Perhaps the most interesting feature here is a map that shows all of the areas Street View covers and all the places that its currently in the process of photographing.

And if you’ve ever wondered about that little figure who appears atop the zoom bar in Google Maps, there’s an explanation for that, too: “Pegman’s name comes from the fact that he is shaped like a clothes peg. He is personified as a life-sized character in several of our demo videos, and has also appeared at other Google events, such as our launch of Street View in France in 2008.”

And if you’ve never experimented with pegman, he’s meant to be picked up and dragged to spots on Google Maps in order to reveal areas covered by Street View.

Despite the recent controversies, the new site really does a good job of justifying the Street Views project. It’s well worth a visit if you have an hour to kill or if you’re in need of some travel inspiration.

The best Chromebooks for 2022: great choices at every price point
Here’s how to delete your YouTube account in just a few easy steps
Lenovo Slim 9i vs. Apple MacBook Pro 14
How to change the login picture on a Mac
The best Mac games for 2022
Best Apple deals and sales for October 2022
Lenovo leaks the world’s first gaming Chromebook — but there’s a catch
Best Prime Day Gaming Laptop Deals: What to expect in October
Want a 72% GPU boost for free? AMD just delivered one — here’s how to get it
Apple mixed-reality headset: Everything we know about Apple’s VR headset
North Korean hackers create fake job offers to steal important data
This powerful student laptop is on sale at Dell this weekend
Hurry! The Lenovo ThinkPad X13 laptop is insanely cheap right now