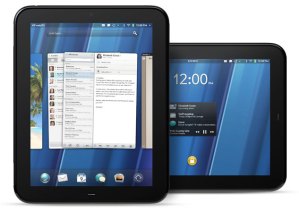 HP’s debut into the world of tablets wasn’t supposed to happen until this summer — that’s what they told the world at their WebOS event earlier this month, anyway. But one of HP’s upstream component partners now tells DigiTimes that HP will begin receiving shipments of the newly-unveiled HP TouchPad at the end of March, and the device will go on sale as soon as April.

By a variety of accounts, this speculative April release date seems like a bit of a stretch — especially since DigiTimes can be spotty in the accuracy of their rumors. And the DigiTimes report doesn’t provide much reason to believe the April release date, considering the sources of the information give no concrete reason for HP pushing its official TouchPad launch date up by a couple of months. Unless, of course, that reason has to do with Apple’s launch of the iPad 2.

DigiTimes says their sources “believe if HP fails to challenge Apple’s iPad, the company will have great difficulties to regain its pace in the tablet PC market in the future,” which is why they are starting this ‘TouchPad in April’ rumor.

If rumors about the iPad 2 are correct, then Apple’s tablet and the HP TouchPad share a number of specifications, including dual-processors, and a 9.7-inch screen with 1024×768 resolution and a 4:3 aspect ratio. Also, the newest word on the street points to a March release for the second-generation iPad.

Here’s what we do know for sure: The HP TouchPad weights approximately 1.5 pounds and measures 13.7mm thick. The device will be based on an updated WebOS 2.1 operating system, be powered by a dual-core 1.2GHz Snapdragon processor, and come in 16GB and 32GB models.

If the April launch is correct, then we expect that to include the Wi-Fi-only model, as HP says that will ship first. The 3G and 4G models are expected later this year. No prices for any models have yet been released.