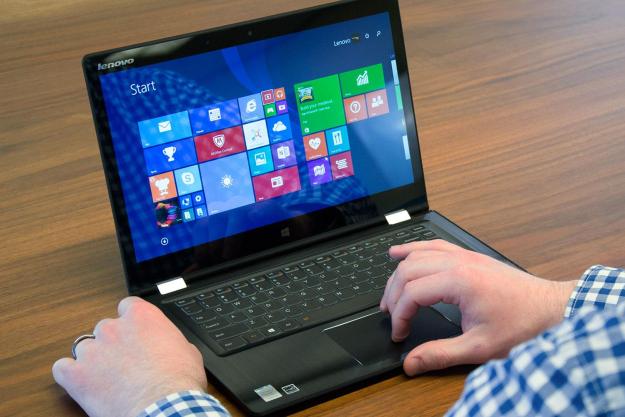 “The Yoga 3 attempts to be a jack-of-all-trades, and ends up being a master of none.”

Around since the beginning, the Yoga series has become the elder statesmen of the convertible laptop category. Introduced in 2012 and covering a number of iterations since, Lenovo’s newest addition to the Yoga lineup is the 14-inch Yoga 3. Following on the heels of its older brother, the Yoga 3 Pro, the Yoga 3 offers an affordable convertible experience in exchange for extra heft and a lackluster display.

The base model of the Yoga 3 comes with a 2.2GHz Intel Core i5-5200U processor, a 128GB solid-state drive, four gigs of RAM, and retails for $799. The second model, priced at $949, boosts the RAM to 8GB and doubles the storage with a 256GB SSD. The more expensive model also comes in three colors – black, white, and light silver.

We got our hands on a black 8GB model to see how it compares to some new convertible contenders, the Acer Aspire R13 and the Asus T300 Chi.

The Yoga 3 eschews the watchband hinge of its higher-priced brother, the Yoga 3 Pro, for a more blue-collar design. Though less flashy, the two silver hinges still permit the Yoga 3 to fold 360 degrees backward, allowing it to be used as a tablet or “tented” media player. The hinge could afford to be stiffer, though, as anything more than a delicate tap will send it rebounding backwards. Without a backrest to stop the display from wobbling, the Yoga’s multi-touch screen was largely wasted in laptop mode.

And while the Yoga 3’s bifold design set the early standard for convertible laptops, its ergonomics feel clunky compared to the detachable T300 Chi or the swiveling R13. When in tablet mode, the Yoga 3’s keyboard faces out from the back of the display making the handheld experience less than ideal.

Thankfully, the Yoga 3 has a grippy, matte-black finish that provides some traction when contorting the display to your needs. It’s a nice choice, and manages to look classy while providing a pleasing tactile experience.

Power comes in the form of a USB port look-alike; while the plug feels more robust than other laptop power-supplies, the cable itself is a rather short six feet. Not great, as we often had to change outlets for even small moves with the Yoga 3.

Mobile users with a myriad of peripherals will appreciate the extra connection.

The connection array is fairly standard, with one port apiece provided for USB 3.0 and USB 2.0. Also included is a 4-in-1 card reader, a micro-HDMI port, and an audio in/out jack. Finally, the Yoga 3’s power supply doubles as a USB 3.0 port when not being used to recharge. A nice addition, but the port’s double-duty means it’s only available some of the time. Still, mobile users with a myriad of peripherals will appreciate the extra connection.

The touchpad is large and enjoyable to use while still feeling tactilely different from the surrounding case. Right and left clicking feels distinct, and the touchpad itself is responsive and quick.

The Yoga 3’s keyboard is also satisfying, with a bright backlight and soft-press chiclet keys. While the keyboard is spacious, the right-shift key is shortened to make space for a directional pad and printing command keys. Not a bad trade, as the extra editing function keys will come in handy for professionals regularly dealing with word processing and data entry.

Both models of the Yoga 3 come with an unfortunately dull 14” FHD 1080p multi-touch panel. In our display tests, we were only able to get the Yoga 3’s display up to 206 lux at 100 percent brightness.

The glossy screen managed to pick up reflections from almost any angle.

That’s pretty low compared to the T300 Chi, at 287 lux; and well below the brightest laptops, such as this year’s Macbook Pro 13 with Retina, which maxes out at 340 lux. In practice, this meant that we frequently had to keep the brightness cranked up to a battery-sucking 100% percent for optimal viewing.

Movies and games looked good on the Yoga 3’s display, with rich blacks and decent contrast. We noticed a yellow tint to the display during general use though, which gave colors a warm, washed out look.

Daytime use of the Yoga 3 also left us squinting from the glossy screen that managed to pick up reflections from almost any angle. Users looking for a bright and vivid display may want to look elsewhere.

Bang for your buck

Both models of the Yoga 3 come stocked with an Intel i5-5200U processor, which registered some strong results in our barrage of benchmarks. The Yoga 3’s Geekbench score came to 2,580 for single-core and 5,190 for multi-core. Those results are okay, but still slower than the more-affordable Acer R13. Even the T300 Chi, which runs on a more modest 1.2GHz Intel Core M processor, managed to stay competitive.

The Yoga 3’s hard drive is fast and responsive, managing to score 463.6 megabytes per second in sequential reads and 267MB/s in sequential writes in CrystalDiskMark. The Yoga 3 also performed well in the 3DMark graphics test, scoring better than any of the other convertibles we’ve reviewed this year.

The differences aren’t huge though, and we found daily use to be functionally the same as the Acer R13 – quick for browsing and work, but insufficient for gaming. Even at its lowest settings, the Yoga 3 had a hard time running Diablo 3 with any smoothness.

At 3.53 pounds and three quarters of an inch thick, the Yoga 3 is bulkier than both the R13 and the Yoga 3 Pro, which sport similarly large displays. Simply put, the Yoga 3 doesn’t feel like a mobile device. Heck, it even weighs a half-pound more than the Dell XPS 13, which is a non-convertible workhorse of a laptop.

One positive aspect of the Yoga 3 is its battery life. Turning in a very respectable average time of five hours and 44 minutes, the Yoga 3 came up just ten minutes shy of the R13’s average of five hours, 54 minutes, and well above the T300 Chi’s three hours, 32 minutes.

The Yoga 3’s has an overenthusiastic cooling system. The internal fans are quick to ramp up, often jumping as high as 42.5 decibels during even basic internet browsing. Full load brough the system’s fans to a loud 46.5dB.

The Yoga 3 makes far too much of a racket to recommend.

These are poor results compared to the totally silent T300 Chi and the R13, which maxed out at 38.1dB. The Yoga 3 makes more noise than its hardware suggests it should.

The advantage to all this airflow is a constantly cool system. Even during long work sessions and benchmark testing, we never felt more than a little warmth on the base. This laptop is certainly comfortable for lap use. We just wish it could achieve that while maintaining more competitive noise levels.

On the slightly more Orwellian side is Veriface® Pro, which uses the built-in 1.3 megapixel camera and facial recognition software for user identification instead of a password, though its possible to opt out. Lenovo’s OneKey® Optimizer monitors power usage for battery optimization, though it might annoy with regular maintenance and low-battery pop-up reminders.

Lenovo also offers a limited warranty including one year on labor, and three years for replacement parts.

These close-backed headphones are a great way to enjoy better sound from the Yoga 3 while also drowning out fan noise.

Carrying the Yoga 3 is easy with this inexpensive laptop bag designed specifically for use with a 14-inch system.

This simple laptop sleeve from Amazon doesn’t look like much, but it provides basic protection for the Yoga 3 at a bargain price.

Microsoft’s small, comfortable Bluetooth mouse is an easy and inexpensive way to make using the Yoga 3 on a desktop a better experience.

In price, performance, and design, the Yoga 3 is unfortunately outclassed on nearly every front. The loud fans, dim display, and awkward ergonomics make the Yoga 3 feel like a relic of the past compared to the slick designs of the R13 and T300 Chi.

It just doesn’t feel very mobile. The 14” display, heavy weight, and wobbly hinge make the Yoga 3 feel more like a last-gen laptop than a truly versatile convertible device. For those looking to compare convertibles, the Asus T300 Chi offers a brighter display with superior portability, while the R13 has better performance and ergonomics.

At $799 for the base model, the Yoga 3 is $100 more expensive than the $699 base-model T300 Chi, but provides a better display and keyboard. The base R13, which offers a more interesting hinge solution and better performance, is $100 more than the Yoga 3, but the improvements are worth the cash.

The Yoga series is beginning to show its age. If you’re in the market for a convertible laptop, there are other options offer a superior experience at a more competitive price.

Topics
This 8K monitor has 3D tech that can be viewed from all angles
Apple just found a bizarre way to make virtual keyboards less annoying
Best 2-in-1 laptop deals: Save on Dell, Lenovo, HP and more
All of Samsung’s videos from today’s Galaxy Unpacked event
The best PC power supply for 2023
ChatGPT has a new way to detect its own plagiarism
Samsung Galaxy Book 3 Ultra vs. MacBook Pro 16-inch
The Galaxy Book 3 Ultra is Samsung’s most powerful laptop ever
Nvidia may have another monster GPU in the works, and the price could be outrageous
AMD’s Ryzen 9 7950X3D pricing keeps the pressure on Intel
What is ChatGPT Plus? Everything we know about the premium tier
ChatGPT Plus to bring priority access during peak times — at a hefty price
Usually $3,879, this Lenovo laptop is down to $1,479 today