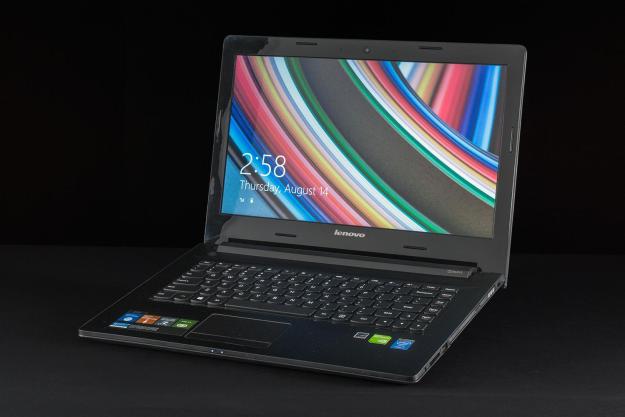 “Though it's generally capable, the Z40 fails to offer a compelling feature, and falls behind the best 14-inch notebooks.”

There are literally hundreds of laptops available today, offering consumers a bewildering array of choices. Yet, with some exceptions, the basic technology within each is quite similar.

Intel CPUs are most common, and when discrete graphics make an appearance, the GPUs are usually from Nvidia as opposed to AMD. Even displays are made of a few core technologies built by a handful of panel manufacturers.

When all is considered, this notebook is the epitome of average.

As a result, we sometimes receive two systems from different manufacturers that seem like long lost twins, and that’s certainly the case with Lenovo’s IdeaPad Z40, and the Acer Aspire E5 14-inch. We reviewed the latter several weeks back.

Like the Aspire E5 14-inch, the Z40 offers an Intel Core i5 dual-core processor, Nvidia GeForce 820M graphics, and a 500GB mechanical hard drive. Even the displays, both of which measure 14 inches diagonally and offer 1366×768 resolution, are very similar.

At first glance then, the two seem almost interchangeable. However, there can only be one winner.

Back in 2012, Lenovo briefly took a leadership position in budget laptop aesthetics, offering a wide variety of colors for many notebooks, including entry-level models. However, for whatever reason, the company has taken an entirely different direction over the last year. Most of its entry-level systems are available only in black or silver, and they’re worse off for it.

The Z40’s ho-hum style doesn’t help its cause. The glossy black bezel attracts annoying reflections. The chassis, a brushed aluminum insert aside, is made of plastic that flexes too often when touched. The Lenovo Z40 both looks and feels frail.

On the plus side, the Z40 includes a removable battery, and an optical drive. The former is a rarity among budget systems, and the latter, while not exactly a unicorn, is no longer a lock to appear in today’s laptops. These features remove rigidity from the chassis, but add options that many competitors don’t typically offer.

We’re disappointed that of the three USB ports here, only one is 3.0. Video output is provided by HDMI and VGA, while audio is handled through a single combo headphone/microphone jack. Ethernet and a card reader round out the physical ports. Wireless connectivity options include 802.11 b/g/n Wi-Fi, and Bluetooth 4.0.

Like most 14-inch systems, the Z40 offers a full-size keyboard, but omits a numpad. Unlike most laptops though, the Z40 still offers an extra row of keys. They include Home, End, Page Up, and Page Down. While potentially useful, the right side Backspace, Enter, and Shift keys are truncated to make room for them. That’s not a good trade-off.

Typing on this notebook is a thoroughly average experience. There’s decent key travel, but the spongy keyboard results in uncertain feel. We found that this could inhibit extremely rapid touch typing, but it will only bug users who can type more than 60 words per minute.

A keyboard back-light is not available with this model. While we always prefer to see one, most competitors in this price range don’t offer it. You’ll have to increase your budget to snag this feature elsewhere.

The Z40’s touch-pad measures only three inches wide, and about an inch and a half tall, making it one of the smallest in this category. Multi-touch gestures can be difficult to perform comfortably as a result. We do appreciate the inclusion of discrete left and right buttons, but they can’t excuse the fact that there’s just not enough touch-pad here.

Woe to the display

The Z40’s 1366×768 non-touch display makes a poor first impression. Like other budget panels, it looks dull and a bit hazy, as if a light fog permanently lurks in front of it. Viewing angles are not a problem, but in all other respects, the experience leaves a lot to be desired.

The Z40’s display quality is slightly above average, and it provides strong speakers, an optical drive, and a removable battery.

Objective tests backed up these impressions. We found that the panel can reproduce just 57 percent of the sRGB gamut, and offers a contrast ratio of only 110:1. That’s not as bad as the Acer Aspire E5 14-inch, which managed just 80:1, but it’s still several times lower than the best notebooks. The poor contrast is caused by bright black levels, which rob images of shadow detail, and render pure black hues as dim shades of gray.

While the display is a poor choice for gaming and enjoying other visual media, at least it’s usable in a bright room. The back-light, which hits a maximum of 240 lux, can barely overcome the reflective screen when it displays a mostly white image (like what you’d see when editing a document). Outdoor use on a sunny day is possible, but not pleasant.

Audio quality is reasonable for a system of this size. The bundled speakers could be louder, but they can fill a small room with clear sound, and don’t muddle the mid-range until volume is close to maximum. Audiophiles will want to upgrade to external speakers or headphones, but that’s true of almost any inexpensive notebook.

Dual core does its best

Our review unit arrived with an Intel Core i5-4200U processor, and 6GB of RAM. This is a typical configuration for a notebook priced around $600. We fired up SiSoft Sandra’s Processor Arithmetic test to see how it performs.

We also tested the Z40 using Geekbench, where it hit a multi-core score of 4,628, and in HD Tune, which showed an average hard drive read speed of 64.6 megabytes per second (MBps). While these benchmarks are new to us, and thus can’t be compared to the Z40’s closest competitors, we can say that the system’s hard drive score is rather low. We felt this in normal use as well, as the system often hesitated for several moments before loading a program.

To gauge the system’s gaming chops, we fired up 3DMark and ran two benchmarks; Cloud Gate, and Fire Strike. Here’s a look at how the Z40 measured up.

As you can see, the Z40 is the slowest system here by a small, but noticeable margin. It scored roughly 10 percent lower than the Acer Aspire E5 14-inch, overall. That’s notable, because the E5 we reviewed had the same graphics chip. This Lenovo is quicker than a system with Intel integrated graphics, but it isn’t a hardcore gaming notebook either.

Not one for marathons

At an inch thick and weighing 4.6 pounds, the Z40 isn’t the smallest 14-inch notebook around, but it won’t be a pain to take along on trips. Unfortunately, the battery holds the laptop back from achieving portable perfection.

Casual games like League of Legends are enjoyable to play on the Z40.

We found that the Peacekeeper Web browsing benchmark eats a full Z40 charge in just four hours and twenty two minutes. That’s an hour and a half less than the Acer Aspire E5 14-inch, and more than two hours less than the Dell Inspiron 15 7000 Series. Even the 17-inch Aspire E5 lasts ten minutes more.

This poor result is due to the Z40’s small battery, rather than high power consumption. The Z40 consumes just 9.3 watts at idle with the display’s brightness set to 100 percent, and no more than 49.3 watts at full load. That’s basically identical to the Acer Aspire E5 14-inch, which proves that its larger battery capacity wins the day.

Yet, in spite of these results, the cooling fan is lazy. At idle, it produces an almost inaudible 33.5 decibels, and that figure increases to only 43dB at maximum load. The Aspire E5 14-inch is only one decibel louder at idle, but four times louder at load. The Inspiron 15 7000 Series and Lenovo IdeaPad Y50 also produce significantly more noise.

The Lenovo Z40 proves that there is more to a notebook than what you can see on paper. Though it seems to be quite similar to the Acer Aspire E5 14-inch, Lenovo’s competitor offers a less attractive design, shorter battery life, and slightly inferior all-round performance.

There is some good news, though. The Z40’s display quality is slightly above average (for the price), and it provides strong speakers, an optical drive, and a removable battery. Yet, these advantages are balanced by problems like the diminutive touch-pad.

Ultimately, when all is considered, this notebook is the epitome of average. We can’t remark on any single, unforgivable flaw, but the Z40 also fails to provide more than we’d expect. Consumers will find better value elsewhere.